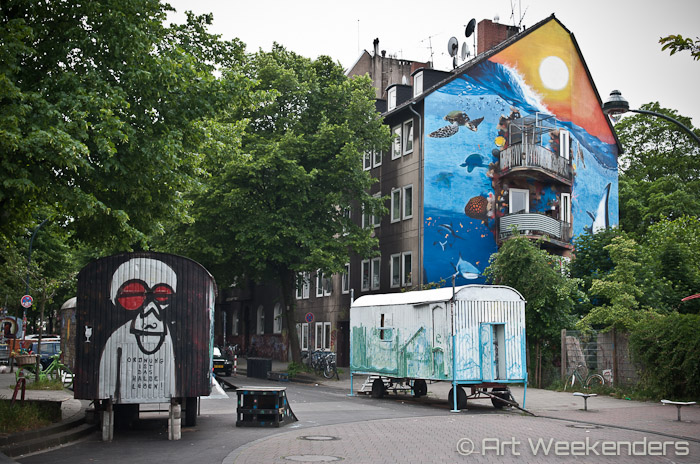 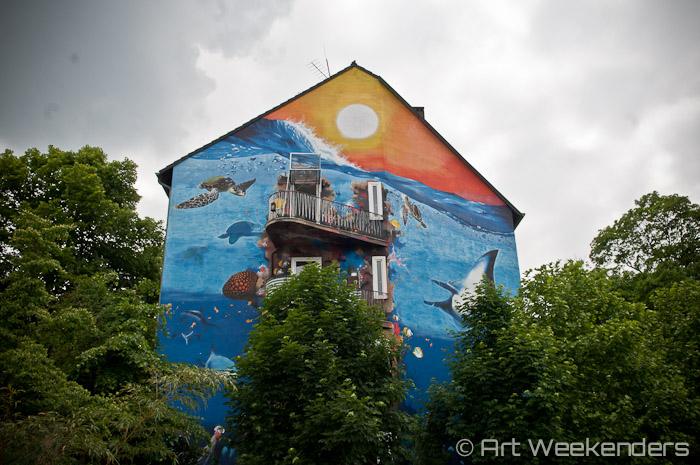 The ocean, street art in the Kiefernstrasse in Dusseldorf, Germany.

I kind of felt like a kid in a candy store, while walking through the Kiefernstrasse in Düsseldorf, Germany. This was not at all what I anticipated, when I first came across this Kiefernstrasse street name, while googling where to find street art in this German city. Of course, I expected some nice street art around, as the street is known for its creative spirits,  yet the quality, the amount and especially the size of all different works was mind-boggling. 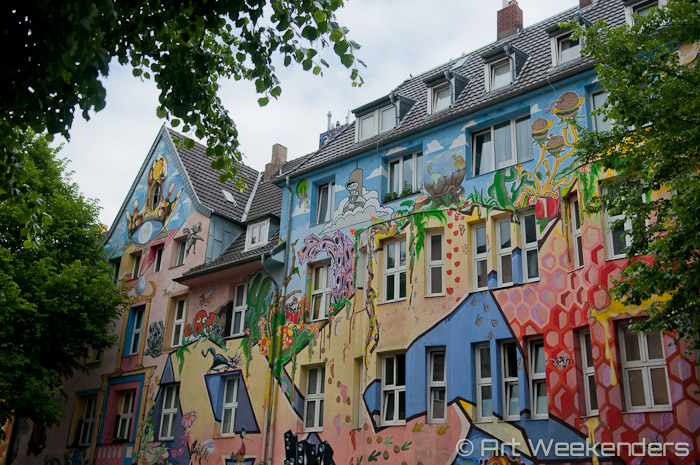 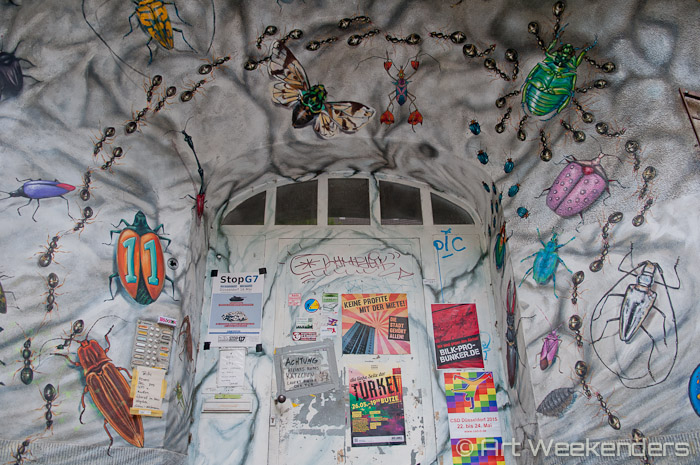 Düsseldorf is generally known for its thriving contemporary art scene, not only known locally but also internationally and thus, seeing art in public spaces during our visit to the city would be unavoidable, we guessed. Still, the street art we encountered in the Kiefernstrasse exceeded our expectations by far. 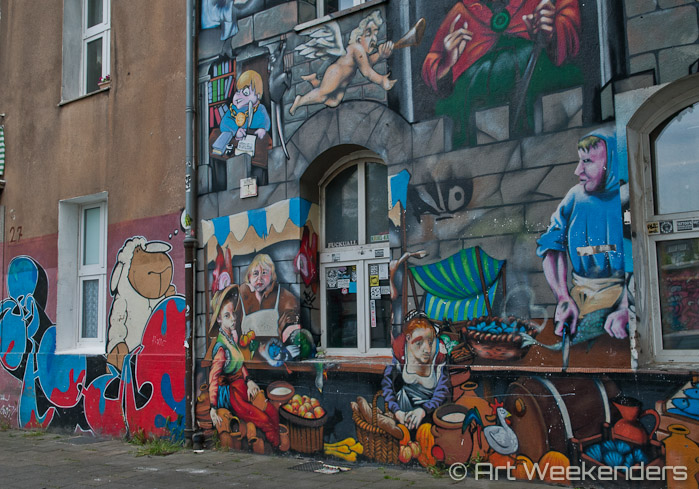 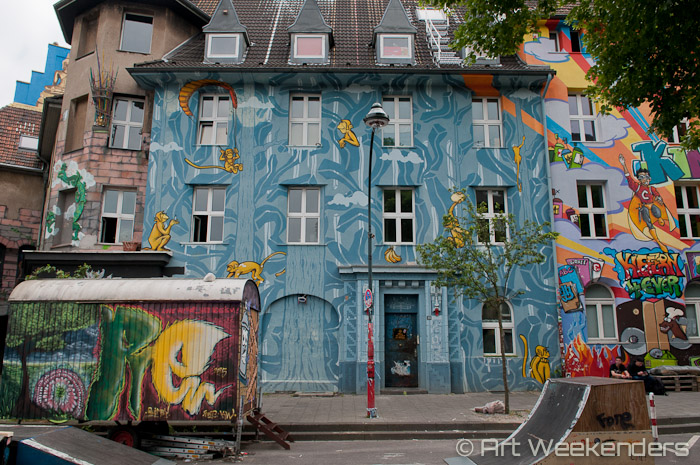 Monkeys, street art in the Kiefernstrasse in Dusseldorf

Although tourists will nowadays visit this street mainly for its street art, the Kiefernstrasse initially became known in the eighties for the squatters occupying the buildings in this street in order to prevent the area being renovated and turned into a commercial district, whereas there was an enormous shortage of housing in the city. While the squatters and the city council were discussing how to legalize the situation, another mid-eighties event brought the Kiefernstrasse to the news. 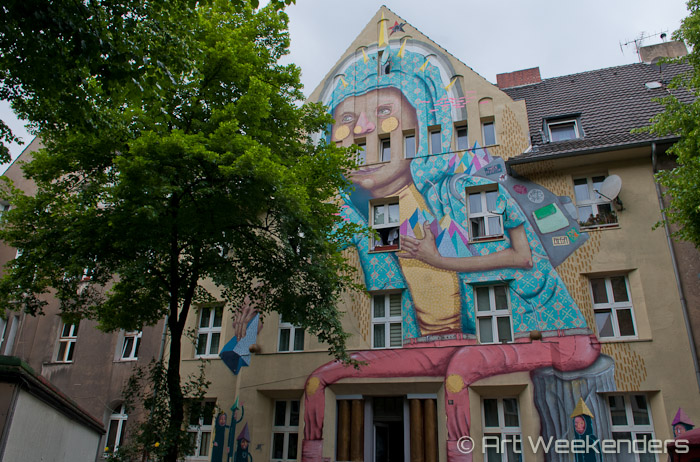 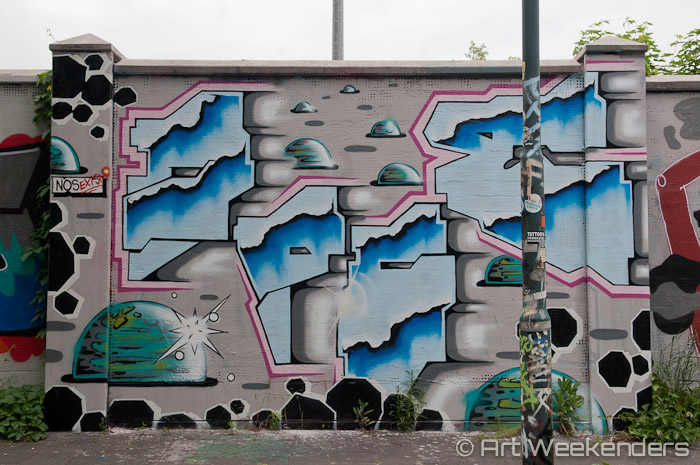 Street art in the Kiefernstrasse in Dusseldorf

This time a number of members of the RAF – the Red Army Faction, a West German far left militant group – were found and arrested here, an event which was followed by more raids and demonstrations. Soon after everything calmed down official tenancy agreements were concluded between the squatters and the city council. 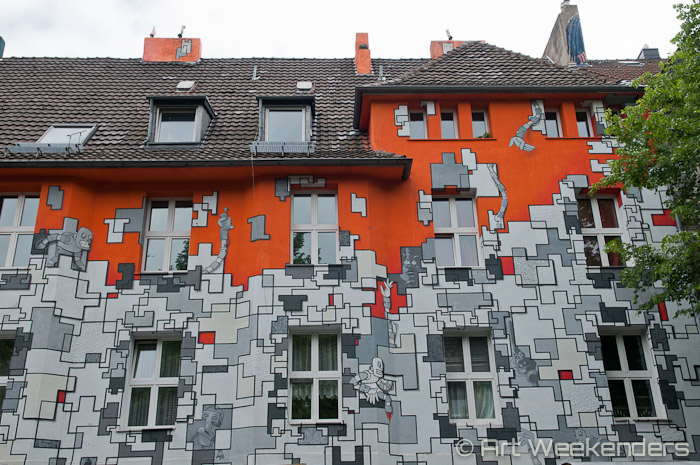 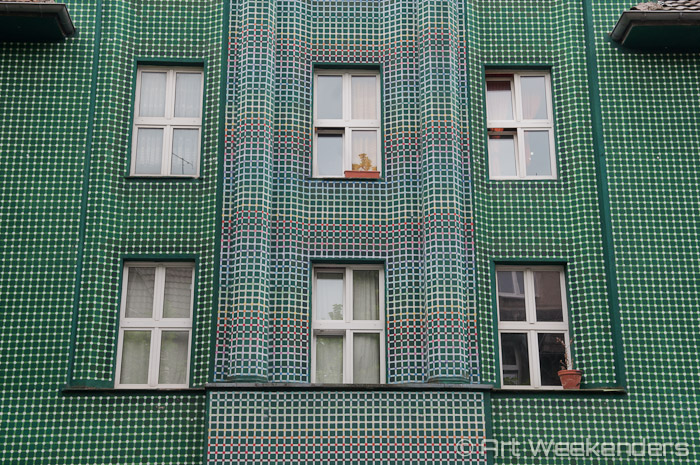 When the squatters were supposed to leave the houses in 2008, causing some unrest here and there, the city council decided to prolong the tenancy agreements indefinitely. Currently about 800 people of 45 different nationalities are said to live in the 180 meters long street. The area around it has meanwhile been transformed into a commercial district. 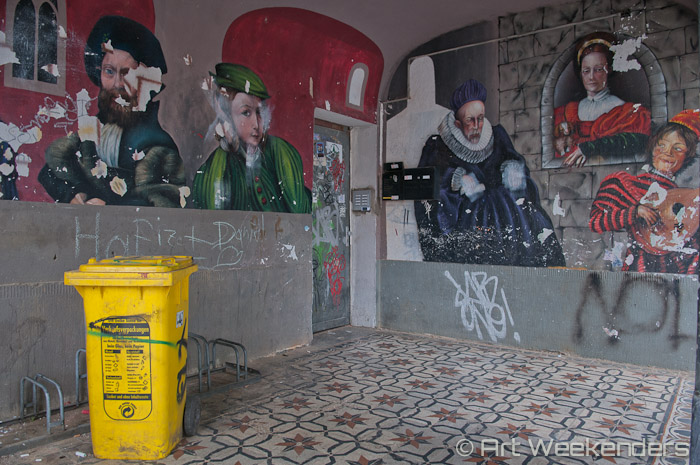 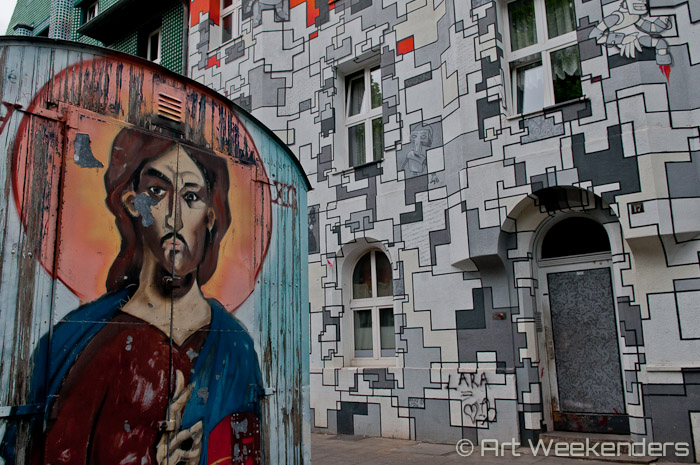 Besides the street art you will also find the Kulturbüro Kiefernstrasse and the night club AK47 in this street. AK47 is the club where the cult punk-heroes of the German band ‘Die Toten Hosen‘ broke through in the eighties. To this day the club remains legendary with concerts on every single week. 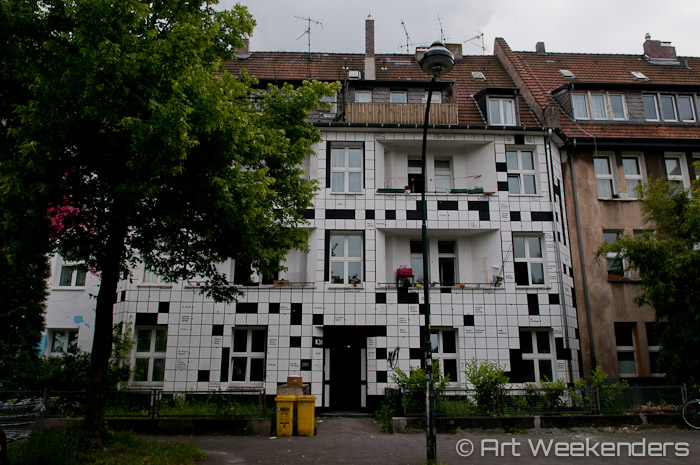 Crossword, street art at the Kiefernstrasse in Dusseldorf, Germany 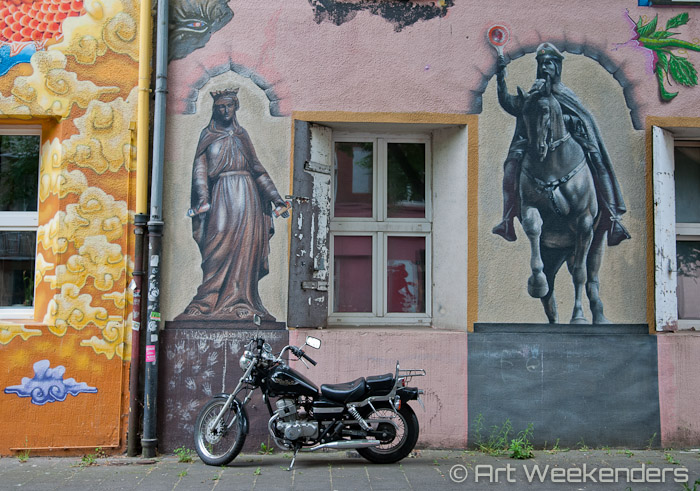 The street art in the Kiefernstrasse is especially visible at the unnumbered houses, which have more or less all been fully decorated with street art. And if we mean fully, we really mean from top to toe. Even some of the trailers and cars in the street have been painted and fit to their surroundings perfectly. 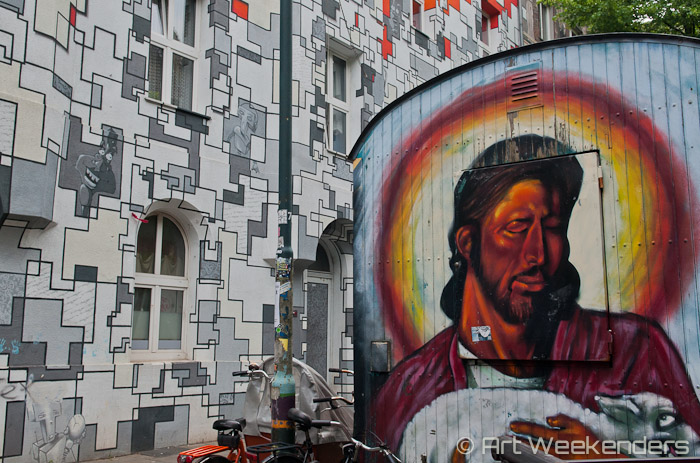 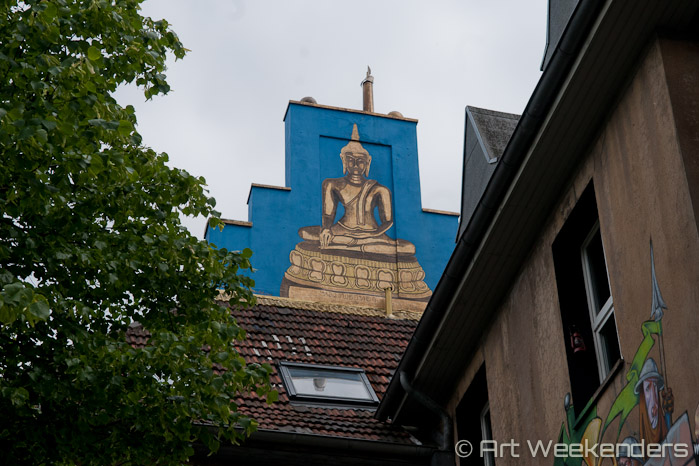 Street art on the roofs of the houses at the Kiefernstrasse in Dusseldorf, Germany

While the area might have been turbulent for years, when we were visiting it felt actually peaceful and calm. The older generation was chatting calmly on the streets, while the kids were playing and using the half-pipe put there especially for them. So if you’re a fan of street art just like us, make sure to make the detour out of the city centre to this area in Flingern-Süd, at the border of the Oberbilk area. Easiest is to take the metro to the Kettwigerstrasse and continue to the Kiefernstrasse from there by foot. 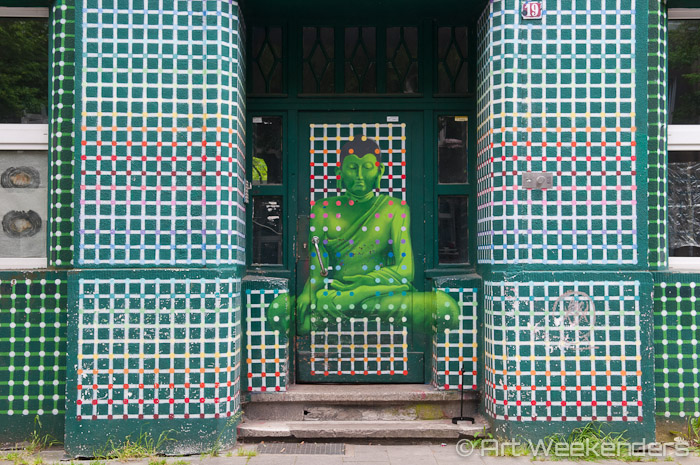 Street view of the Kiefernstrasse in Dusseldorf, Germany

This article about street art in Düsseldorf is part of our ‘Street Art Corner’ series during which we showcase street art from around the world. Like to contribute to this series or have to tip where we can find more street art? Just send us a message at wkndr (at) artweekenders (dot) com. We would love to see more street art crossing our paths, either online or in real life.

Like to discover more street art? Have a look at the below articles we’ve previously published: