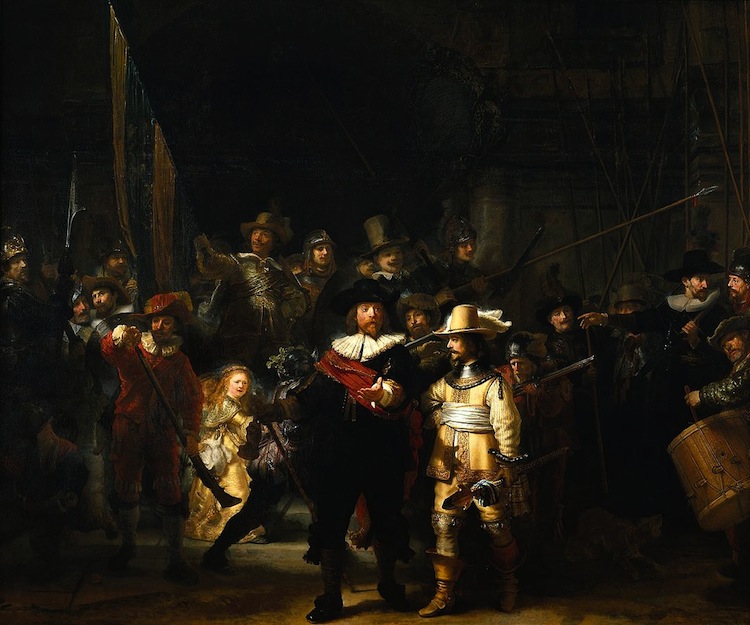 Just about a month ago the art world was shocked by one of the worst cases of deliberate destruction of an historic site since the Second World War, when the Islamic Party destroyed the Palace of Ashurnasirpal II in Nimrud, Iraq. Nimrud, being the seat of the ruler Ashurnasirpal II during the 9th century BC, was one of the world’s greatest cities in that era and thus, it was an area with important relics and artefacts. While my jaw dropped open when seeing the violence used to destroy this important heritage sight on the news, I started to reflect over the question how we actually managed to secure so many artworks during Second World War in Europe. While we nowadays regularly wander through museums containing centuries old art works, questioning the history and stories behind a painting, we hardly seem to reflect over the question how these works were preserved during the centuries and especially during wartimes.

Coincidentally the Stedelijk Museum in Amsterdam is currently paying some extra attention to this topic with the exhibition ‘The Stedelijk and the War‘ in light of the fact that this year The Netherlands is commemorating the 70 years anniversary of its liberation.

In addition, during the years different books have appeared about this topic, of which The Monuments Men is most likely the best known, having been made into a movie under the direction of George Clooney in 2014, revealing the astonishing stories of those securing and saving culture and art in the Second World War. A movie I just had to watch.

The Stedelijk Museum and The Second World War

Shocked and worried by seeing the effects of the Civil War in Spain in 1938 and the sanctions taken against Jewish artists after the empowerment of Hitler in 1933, Willem Sandberg, at the time conservator of the Stedelijk, took the important initiative to build a bunker in the dunes near Castricum, a village some 30 kilometers outside Amsterdam. 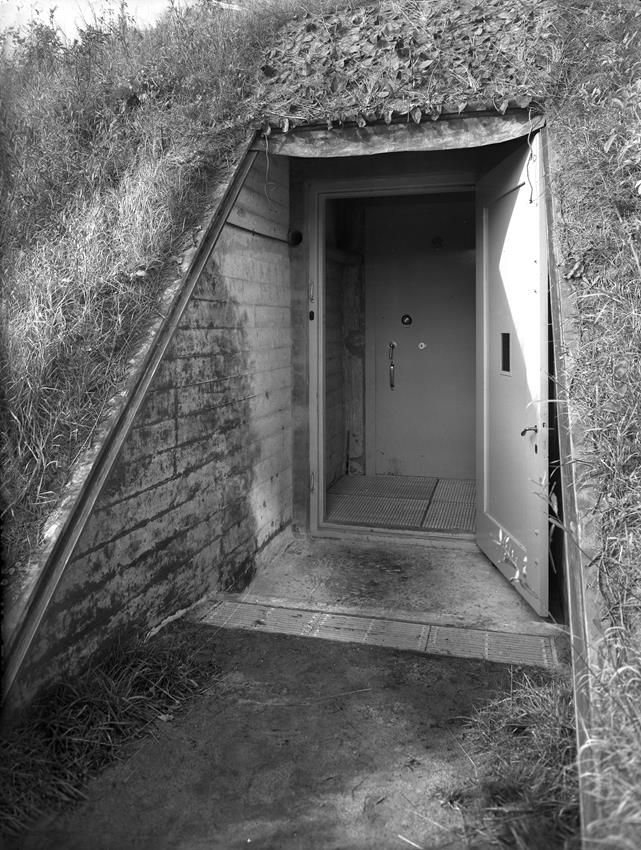 The ‘secret’ bunker, being the first of its kind, functioned as a place to store artworks of initially the Stedelijk and later on also of other museums, like the Rijksmuseum, and private collectors. Some 500 art collections in total – including those of Van Gogh‘s heirs and several Jewish collectors and Rembrandt‘s ‘Night Watch‘ – were stored here during the war, preventing them from falling into the hands of the German occupiers, who under the reign of the art lover Hitler looted art works throughout Europe and thus also The Netherlands.

The role the Stedelijk Museum played in securing centuries old art works during the Second World War has thus been crucial for the art world and what we can see of it in The Netherlands these days. 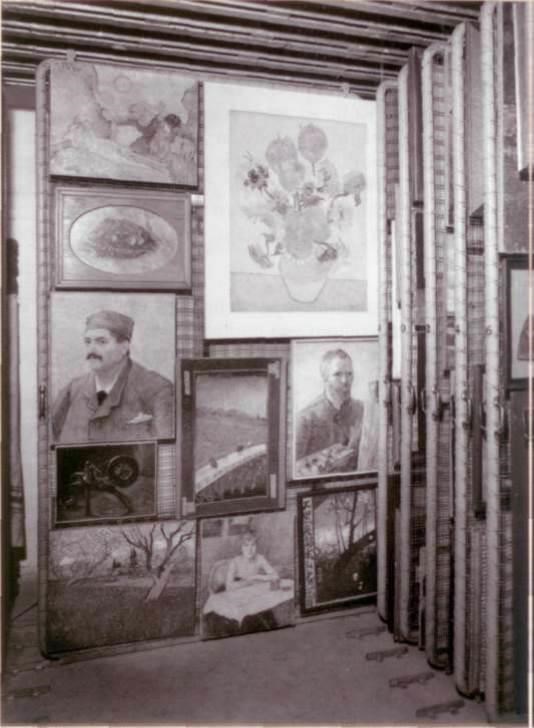 Apart from interesting details, videos and pictures of the bunker, the exhibition ‘The Stedelijk and The War‘ also tells us how the selection of art works took place. The more important they were considered in terms of quality or historical importance, the more priority they had to be kept safe in the bunker as soon as possible after the bunker was finished.

Anticipating that the German occupiers would perhaps one day discover the bunker, often limited details of the stored art works were noted, just not to leave any traces in regards to the original owner of the art works stored. Whereas this measure was mostly meant to protect the Jewish collectors, after the war this led to an enormous task for the Stedelijk to return all art works to the rightful owners. The exhibition also goes into the details of the national provenance research project ‘Museum Acquisitions after 1933′ through which some of the owners – but still not all – were found back. 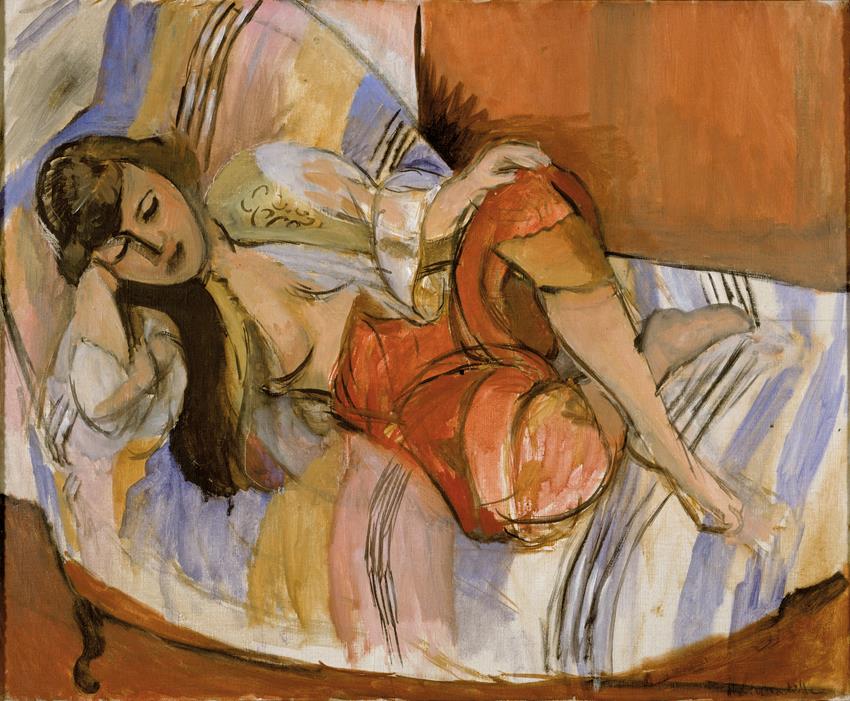 Henri Matisse, Odalisque, 1921 (courtesy: Stedelijk) – once stored in the bunker

If you have no opportunity to visit the exhibition, make sure to have a look at this 17 minutes documentary showing how the Stedelijk Museum safeguarded art during the Second World War.

The Stedelijk Museum and the Second World War from ARTtube on Vimeo.

The story of the Monuments Men is one that for decades has been given little attention amidst all other heartbreaking stories about the Second World War. Wouldn’t it have been for Lynn H. Nicholas this story might not even had come to the surface at all.

When Nicholas read the obituary of a French woman spying on the Nazis looting art, she got interested what actually happened and started researching the topic in more depth. This research resulted in the publication of the book The Rape of Europe, a book that would be the forerunner of the book ‘The Monuments Men: Allied Heroes, Nazi Thieves and the Greatest Treasure Hunt in History’ by Robert Edsel and the movie titled The Monuments Men, all telling the story about this small group of middle-aged men and (a few) women with that one important task: finding and saving art and constructions of cultural importance throughout Europe. 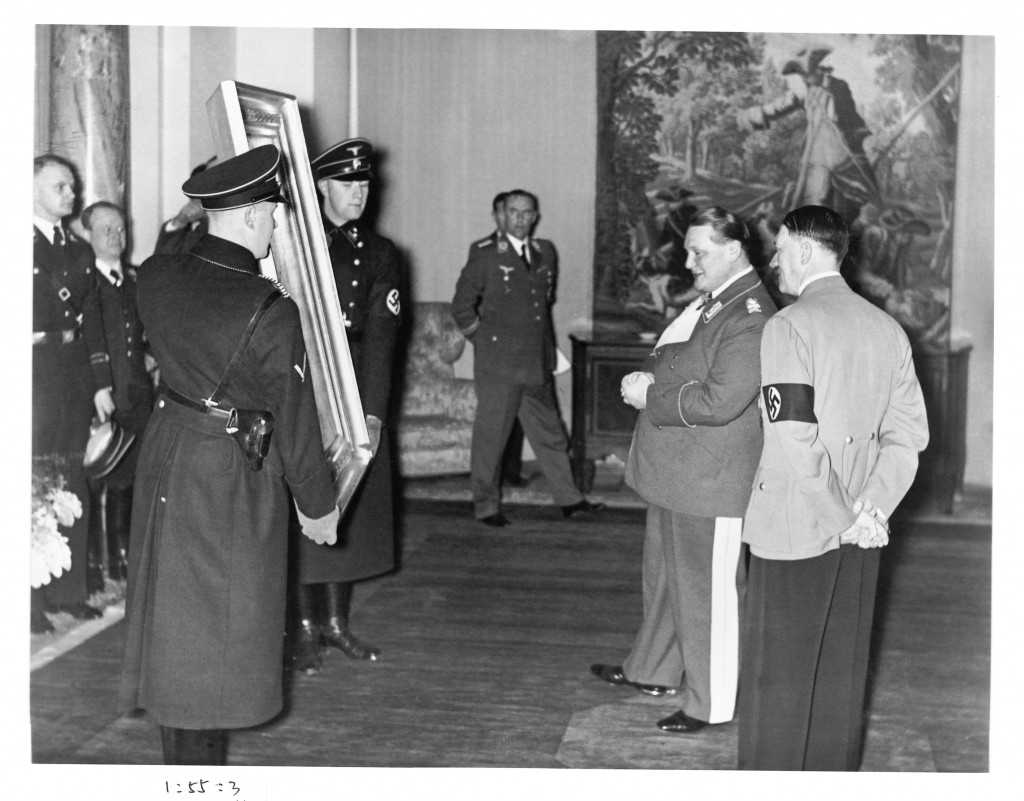 Hitler and Goering with Painting (Library of Congress, Washington, D.C.)

Hitler, a former wannabe art scholar, did not only wish to build the Third Reich namely. Having a very great interest in the arts he also wished to build the greatest museum in Europe, the so-called Führermuseum in Linz, Austria. To this effect all art plundered and stolen by the Nazis would have to be put into his possession first, giving him the opportunity to select the artworks he would later display in this museum. An order that likely saved many artworks from destruction, but also went hand in hand with an other strict order by Hitler: in case the war would be lost, all artworks would have to be destroyed as soon as possible.

It was thus not an easy task that lay ahead of the Monuments Men, who somehow had to fulfill this important task of saving Europe’s art and culture in a war environment which was not supportive or understanding the importance of it at all, in fact it was often as a race against time. Yet, little by little with a lot of patience and persistence more and more historical constructions and art works were saved and found back, among which Bruges’ ‘Madonna and Child’ and the Ghent Altar Piece. 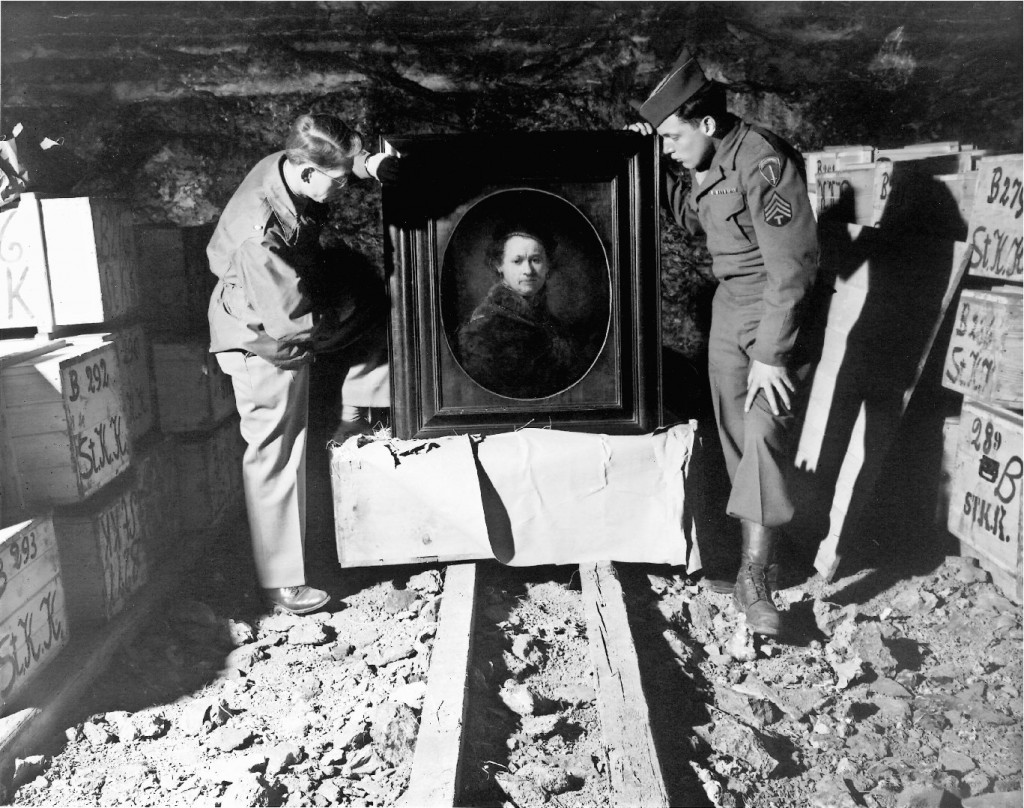 Heilbronn, Germany – 1946: This Self Portrait by Rembrandt, inspected by Monuments Men Dale V. Ford and Harry Ettlinger (right), was stored for safe-keeping by museum officals from Karlsruhe in the Heilbronn mine. The painting was ultimately returned to the Karlsruhe Museum. This was just one of thousands of paintings and other works of art which were found in Heilbronn as can be seen by the crates stacked behind each man. (National Archives and Records Administration, MD)

In total five million works of art are believed to have been saved by this great group of men, who risked their lives to save the art we can nowadays admire when walking through Europe’s finest museums.

Next time we’re visiting one of these museums we will certainly take a moment to reflect over this.

This post is part of the ArtSmart Roundtable (don’t forget to follow the page on Facebook), a group of art enthusiastic travel bloggers, with May’s topic being War & Peace. The other contributions for this month are: