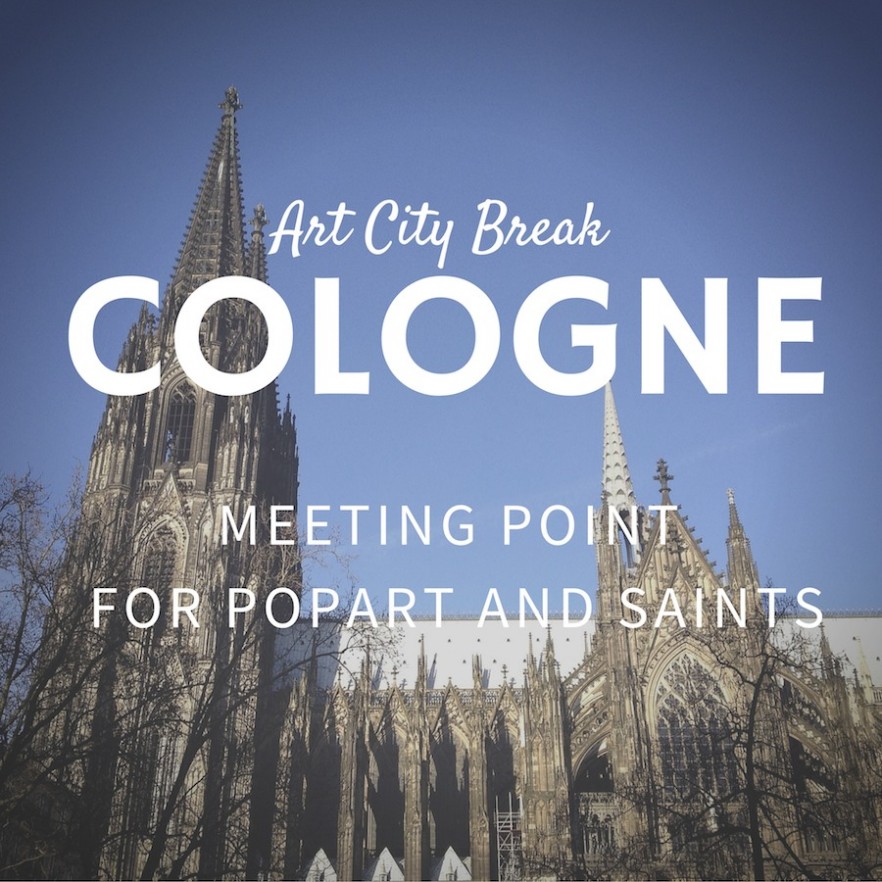 It’s a new month again, spring is in the air and the best season for art city breaks is about to start. For this month’s round of ArtSmart articles, the choice for us members of the ArtSmart Roundtable fell on writing about ‘art cities’ around the world. We use the occasion to introduce the German city of Cologne, one of the best art city destinations in the country, closely behind the capital Berlin.We also like to introduce you to the newest member of our Roundtable: Lizzie of Wanderarti. Lizzie not only writes about art cities, but also showcases works of different artists.


For new readers not familiar with The ArtSmart Roundtable: we are part of a group of art-focused travel bloggers who write about a new art-travel related topic every month. Once you’ve read this article, make sure to also check out the contributions from the other members, there will be stories from the North American West Coast, about a hidden gem from the Balkans and a travelling dog visiting cities around the globe… So yes, you should get curious – links at the bottom of this post.

What Makes An Art City Stand Out?

Before we delve into what Cologne has to offer, let’s define what the ideal art city break would actually look like for us personally. It is actually a big part of our focus on this site, so it’s a topic we often reflect over. Although a good museum on its own can make a destination worthwhile travelling to, it’s not only the museums that make a real art city stand out. The basis for a perfect art city break for us lies in a mixture of different elements. To make it simple, here are some random thoughts around this. 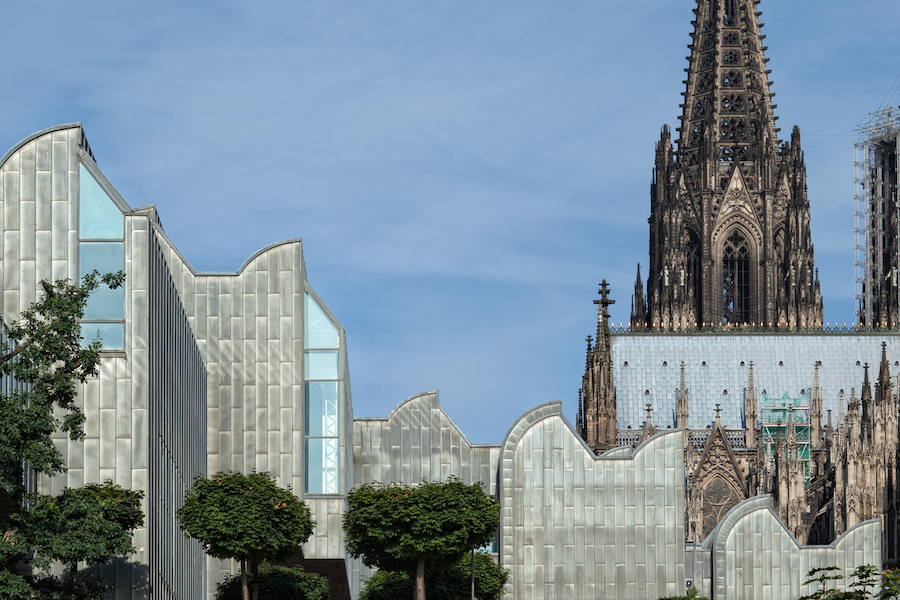 So how does Cologne qualify as an art city destination? Pretty well, we think. Here are just some of the factors contributing to it.

Being Germany’s fourth largest city (after Berlin, Hamburg and Munich) with a population of over a million inhabitants, you would perhaps expect that you need to use public transport quite often to get from one highlight to the other in Cologne. This is however not the case at all. In fact, the main highlights are all quite close to each other and you can easily walk from one attraction to the other, while enjoying parts of the historic city or views over the Rhine, the famous river running through Cologne.  And it all starts the moment when you walk out of the train station.

With more than 30 museums and over 100 galleries we bet you’ll not be able to visit every single one of these venues in just one weekend, unless you just run in and out from one to the other. These numbers do, however, give an idea of the art scene in Cologne, considered as one of the best in Germany. 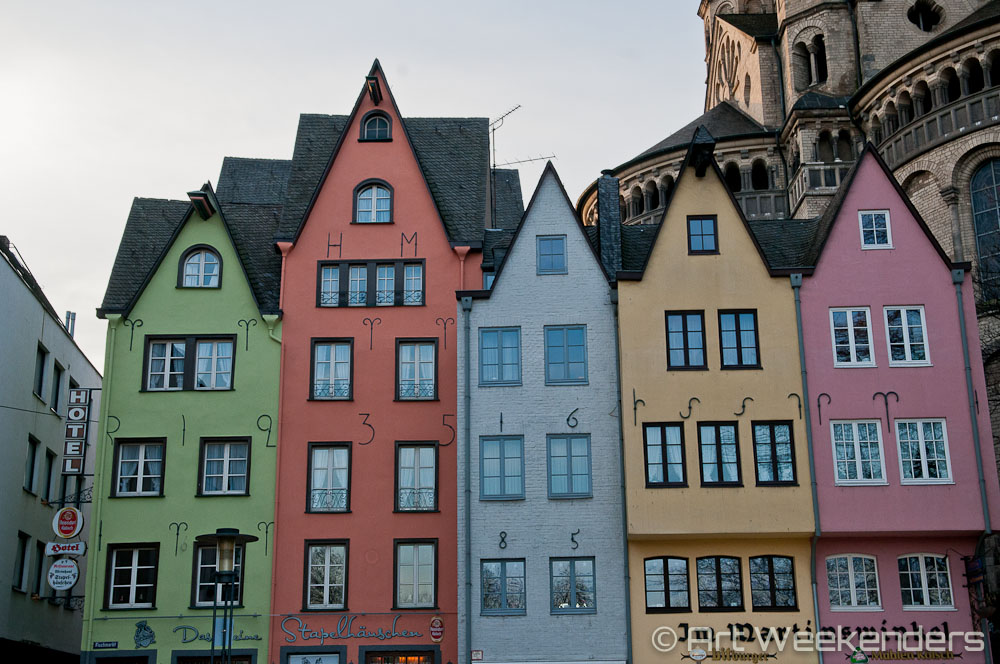 As soon as you walk out of main entrance of the train station, you find yourself underneath Cologne’s cathedral, the Kölner Dom, the cathedral with the largest facade of any church in the world and the largest Gothic church in Northern Europe. It’s a UNESCO World Heritage Site and Germany’s most visited attraction, with 20,000 visitors per day. Make sure to save some energy to climb up to the top for a splendid view over the city, some 509 steps up, and… back down. 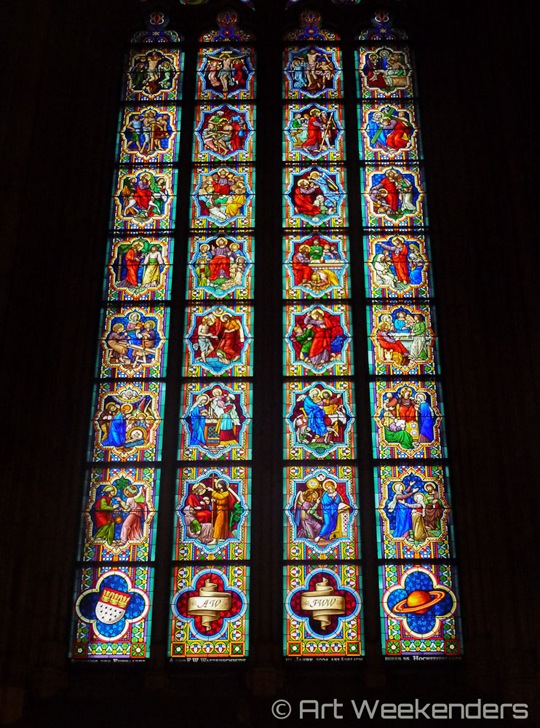 Next to the cathedral you will find what we personally consider as the best museums in Cologne and one of the best in Germany: the Museum Ludwig. This museum on its own is a contributing factor to the art city break Cologne title, in our own opinion. The museum was founded in 1976 when Peter and Irene Ludwig donated 350 works of modern art to the city of Cologne. Since that year the collection of the museum has been extended immensely and nowadays it has one of the most important collections of art from the 20th and 21st centuries worldwide. It’s here you’ll find the most extensive Pop Art collection in Europe, the third biggest Picasso collection in the world (after Barcelona and Paris), one of the best collections of German expressionism and one of the internationally most important collections of photographs from the nineteenth and twentieth centuries. Did you by the way know that there are more Ludwig Museums throughout the world? 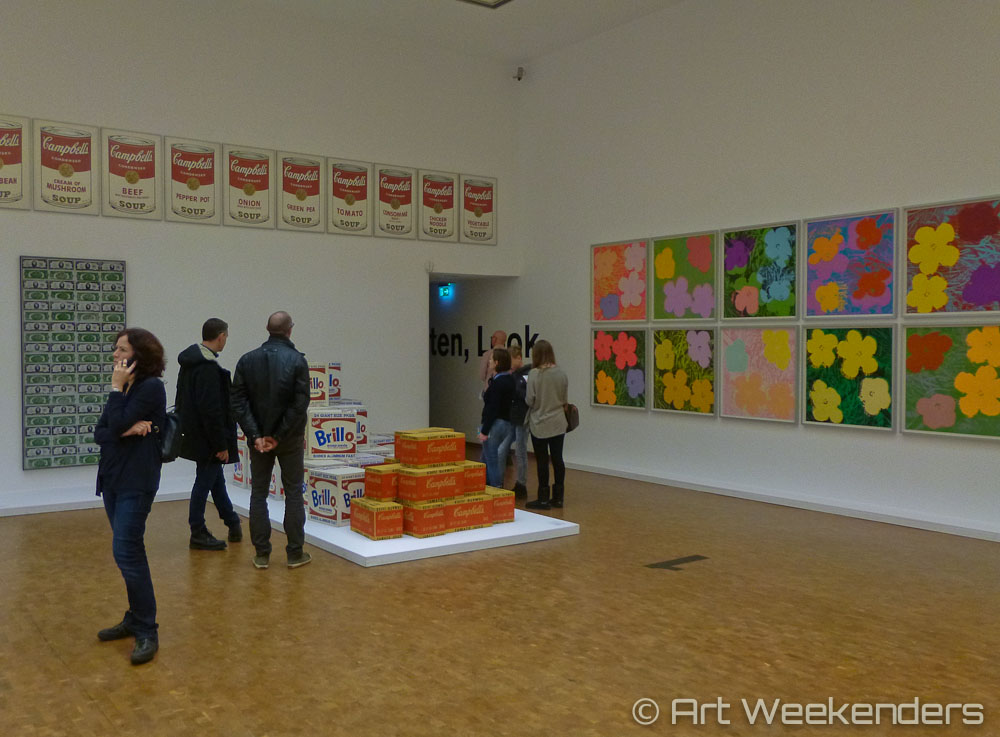 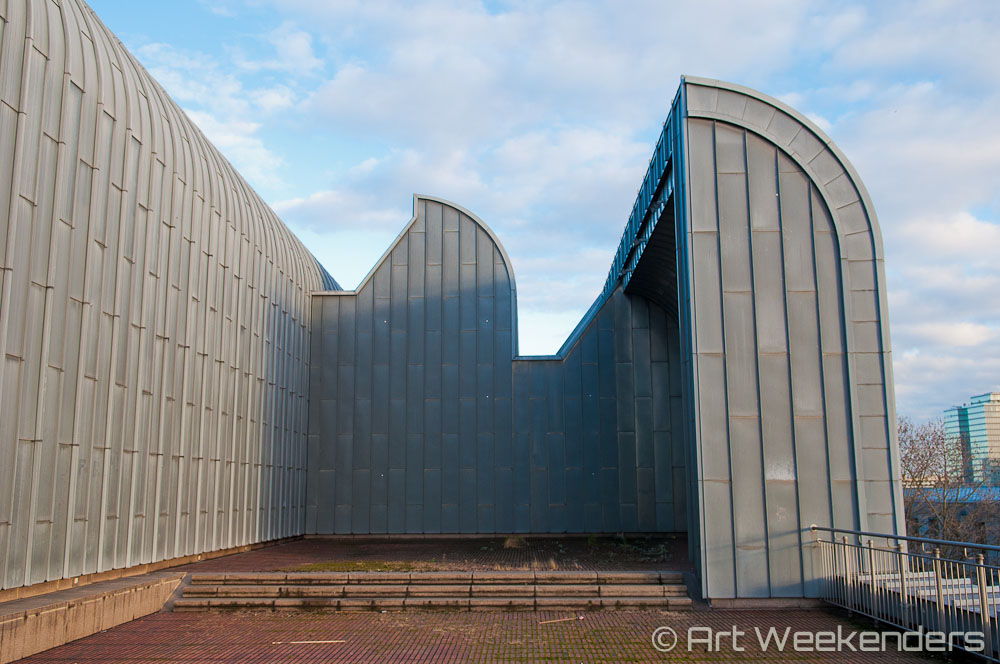 Also adjacent to the cathedral is the Romano Germanic Museum, a museum which goes into Cologne’s history, a city founded by the Romans under the name Colonia back in 50 AD. The museum is actually located on the foundations of an urban Roman villa with the world-renown Dionysius mosaic, which you can also see from the Cathedral Square via a panorama window. Inside the museum the history of the Romans along the river Rhine is shown by different objects like wall-paintings, mosaics, architectural elements and tools, some going back as far as one hundred thousand years. The museum also has the world’s biggest collection of Roman glass vessels. 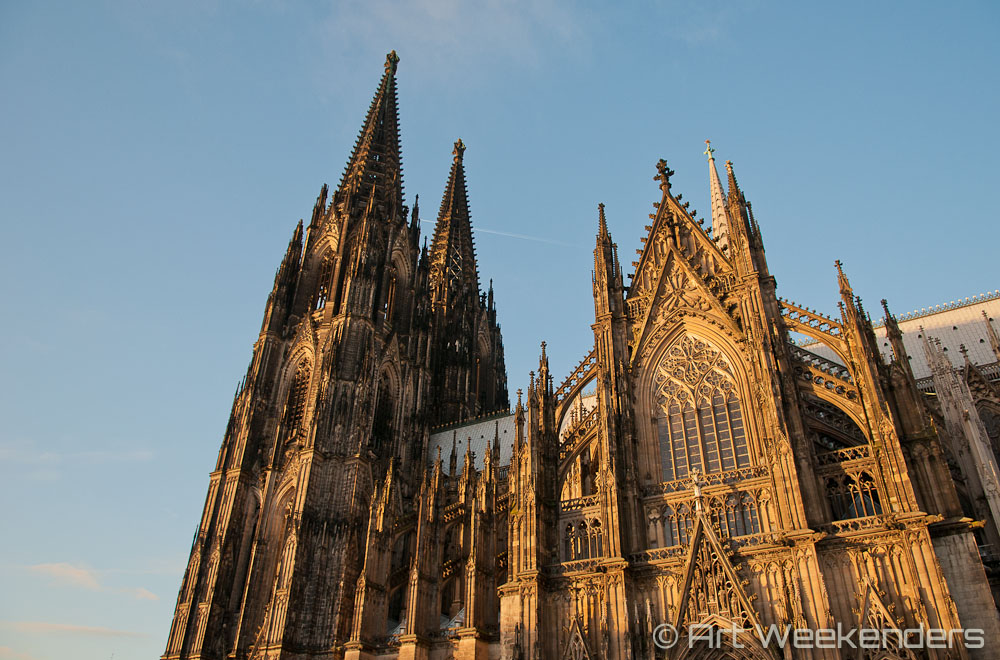 Only a couple of blocks away from the cathedral you’ll find the Wallraf-Richartz Museum & Fondation Corboud. This museum houses the works of European painters from the 13th to the early 20th century, ranging from classic Medieval art to Baroque masters to the works of the impressionists. It’s here you’ll find among others Stefan Lochner’s Madonna in the Rose-bower, also referred to as the ‘kölsche Mona Lisa’, next to Rembrandts and Monets. 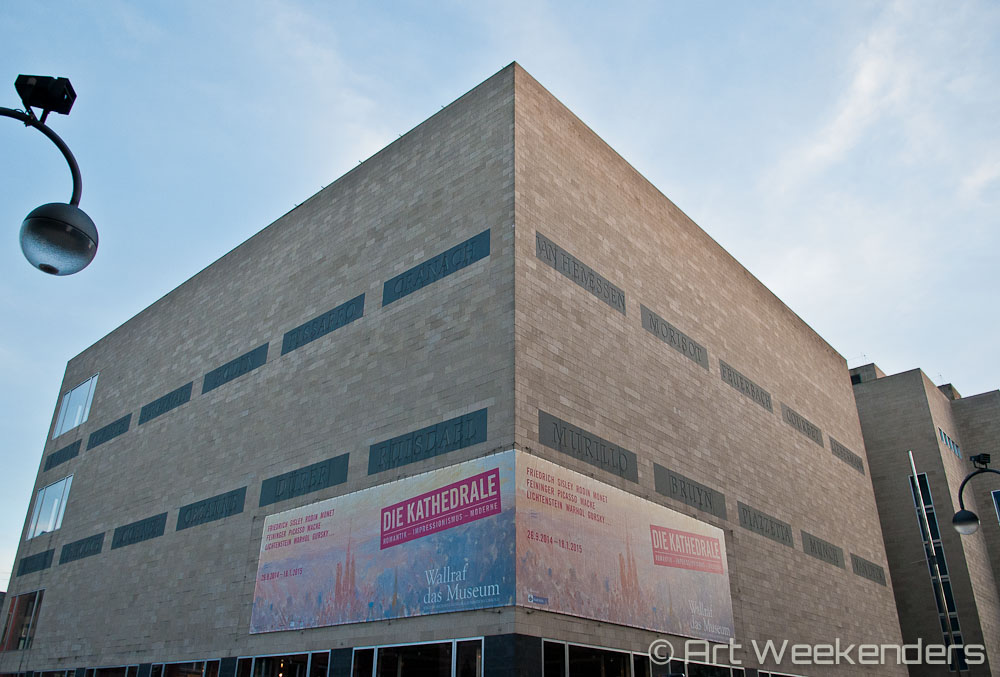 Just across the Wallraf-Richartz Museum you’ll find the Farina Fragrance Museum. If you ever wondered where the name ‘eau de cologne’ comes from and wish to smell (or buy) the real deal, dive into the history of scents and visit this museum, which is the birthplace of the original ‘eau de cologne’. It may be less of a highlight for some of us, but considering its history and its place in world history, it’s fun enough to spend some time here too. 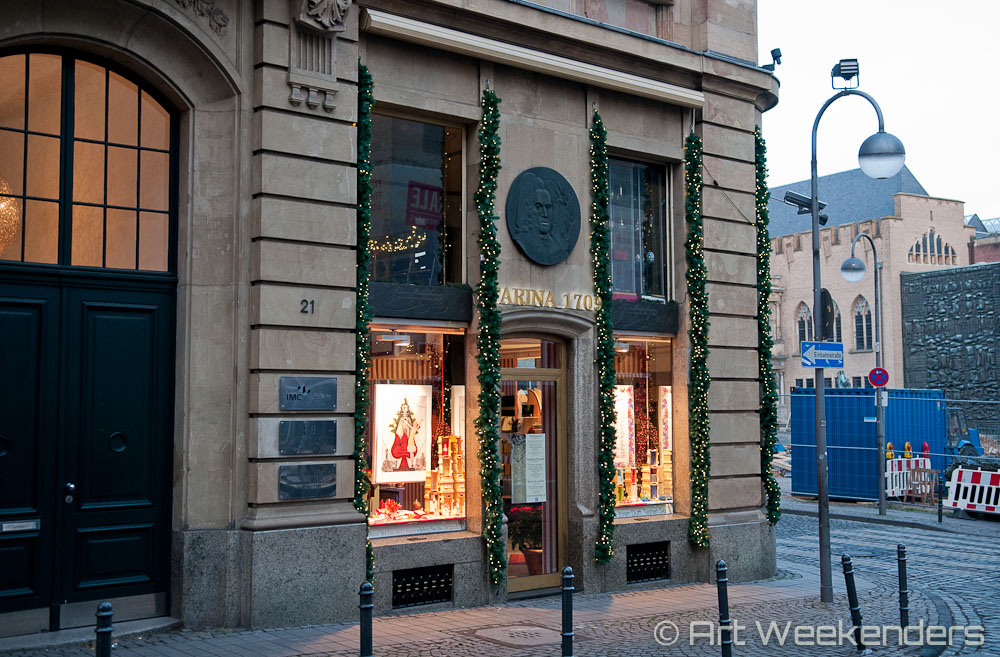 While walking from one museum to the other you’ll find yourself in the historical centre with its cobblestoned streets and cute, traditional houses, many of which are housing restaurants or traditional breweries (Brauhaus in German) today. The term ‘historical’ is a bit misleading though, as the largest part of the city centre was destroyed during World War II. After the war only some of the traditional houses were rebuilt, although with German preciseness, explaining why you hardly notice that the buildings are not originals. 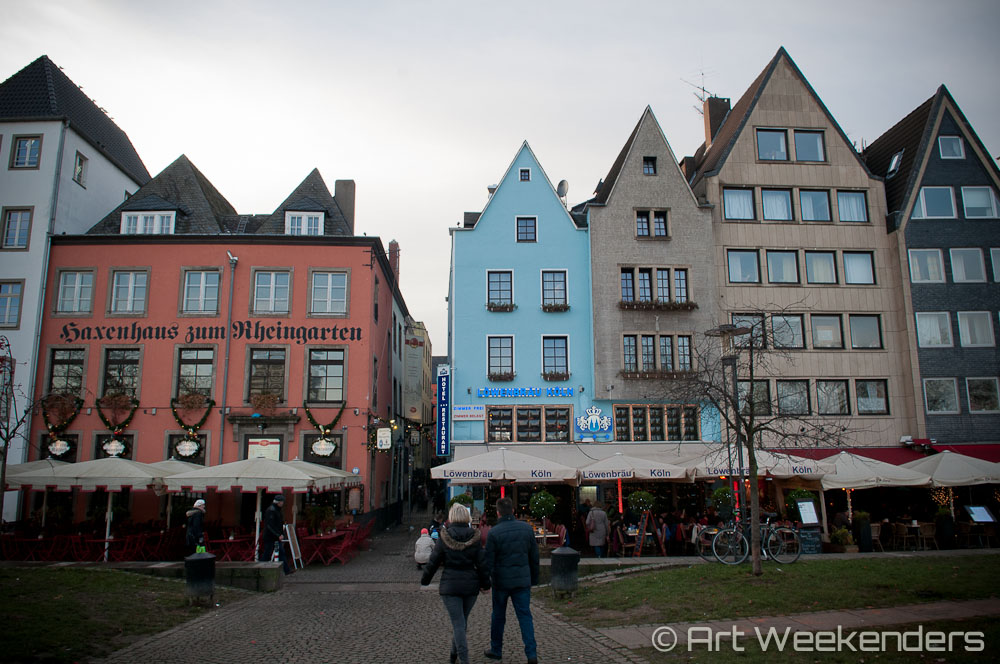 Part of Cologne’s old centre, with a view over the Rhine

Mentioned in the Wall Street Journal as one of Europe’s best open-air sculpture parks, the Skulpturen Park Köln is one of the places we recommend all art lovers to venture out of the city centre for. With some fifty different contemporary art works by nationally and internationally renown artists spread across four hectares of land, it makes a perfect destination on the sunnier days. Every two years the artworks are replaced by new ones. The park is situated along the Rhine river, close to the botanic gardens and the zoo and is about half an hour walk from the city centre up along the Rhine. You can also take public transport there. 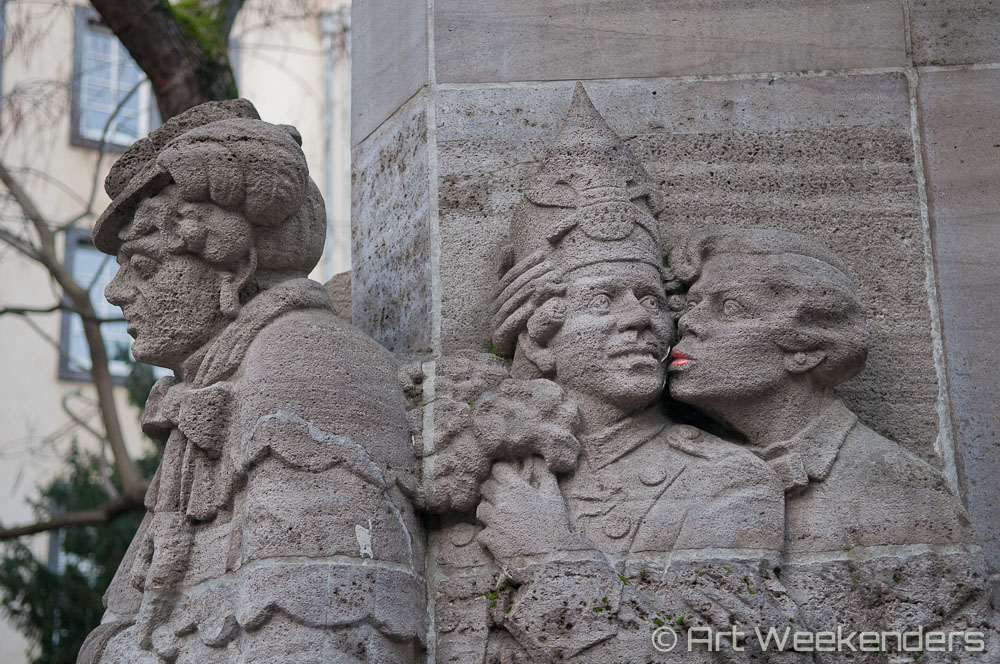 Detail of the Ostermann fountain in the city centre of Cologne, Germany

Half-an-hour walk down from the city centre the opposite way you will find the modern Rheinauhafen district. In this redeveloped area you’ll find some interesting modern architecture like the “Kranhäuser” (crane towers), and some trendy galleries, restaurants and bars.

Although we’ve personally seen very little street art in Cologne ourselves – apart from some sculptures like the one of Tünnes and Schäl – since we were mainly in the old city centre during our stay, we have heard good stories about the street art scene in Cologne. In fact, the city has its own street art festival, called Cityleaks, which will be on for the third time in September 2015. You can likely expect us visiting back then. When you’re not able to visit the festival, but do like to discover some new street art, make sure to check-out the Ehrenfelt and Belgische Viertel, where there’s supposed to be plenty of street art. 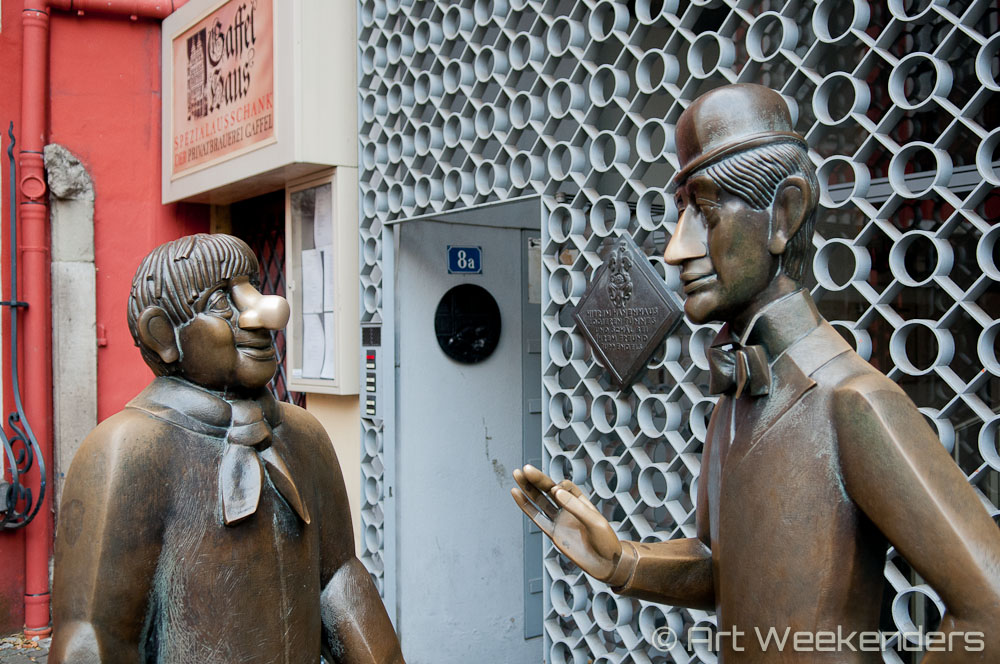 The statues of Tünnes and Schäl, two figurines from the puppet theatre of Cologne, representing typical Kölsche.

In terms of mentality the people of Cologne are often referred to as a separate nation within Germany. Having had many international influences as from the moment the metropolis was founded by the Romans, the open-minded, tolerant, friendly and cosmopolitan character likely came naturally with life. Aspects of this you’ll see back in among others the gastronomy of the city. Apart from typical German food, like bratwurst, you’ll find almost any type of dish you’d like to eat here, from Japanese to Brazilian to Arabian food. So although the German like their meat, also as a non-meat eater you’ll have plenty of options. 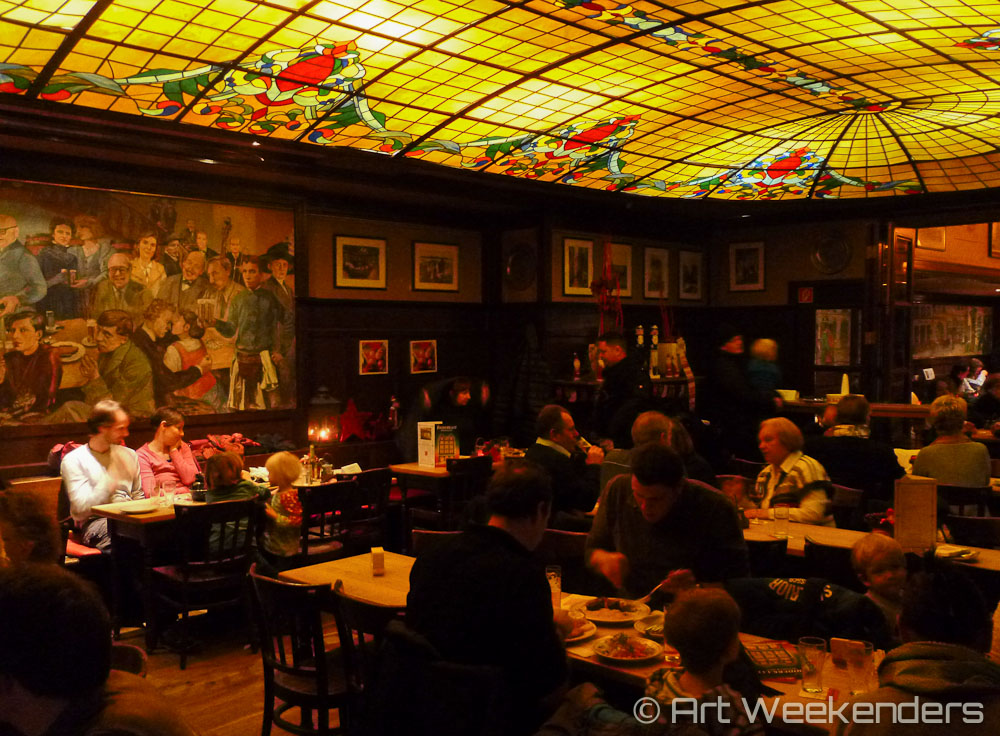 One of Cologne’s restaurants.

What else have you experienced in Cologne that you think us and other readers should know about? Feel free to share your knowledge by leaving a comment here below.
Tip: To save on costs consider buying the Museumscard or the Kolncard. The Museumscard is € 20, – for one person or € 32 for a family with two children and is valid for a number of museums in Cologne for two consecutive days plus as a public transport ticket on the first day. The Kolncard starts from € 9,- and entitles you to 24 or 48 hours of free travel on trams and buses, plus 50 % discount for different museums, restaurants and other cultural venues.
The other contributions to the ArtSmart Roundtable of this month are: