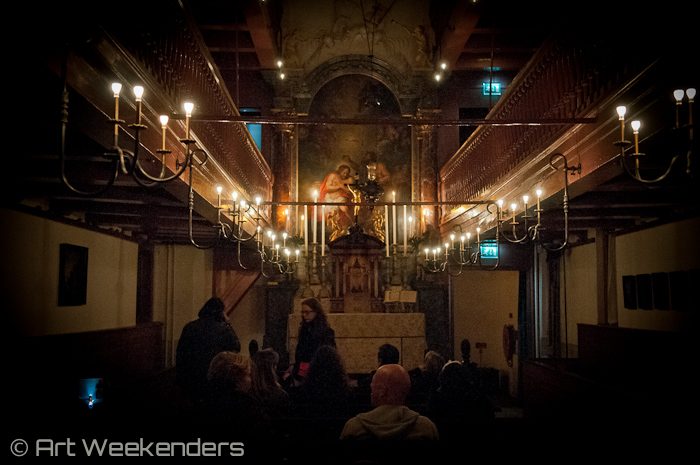 A Hidden Treasure of Tolerance

In the Heart of Amsterdam’s Red Light District

This article was our contribution to the monthly ArtSmart Roundtable for November 2014, a collaboration between like-minded art-focused travel blogs to write articles on a common theme each first Monday of the month.  This time around we are discussing Hidden Gems.  At the bottom of our article, you’ll find the links to the other stories published this month – don’t miss out!  Here on the Art Weekenders pages we are taking you to a real hidden gem from Amsterdam, a centuries old secret place that even today brings a special meaning to our town: to Amsterdam’s hidden Ons Lieve Heer op Solder church.


You live in a city for many-many years, consider yourself a local expert knowing “everything and a bit” in town and still, occasionally you come across attractions that just makes your imaginary jaw drop. A clear sign if any that you came across a truly hidden gem. 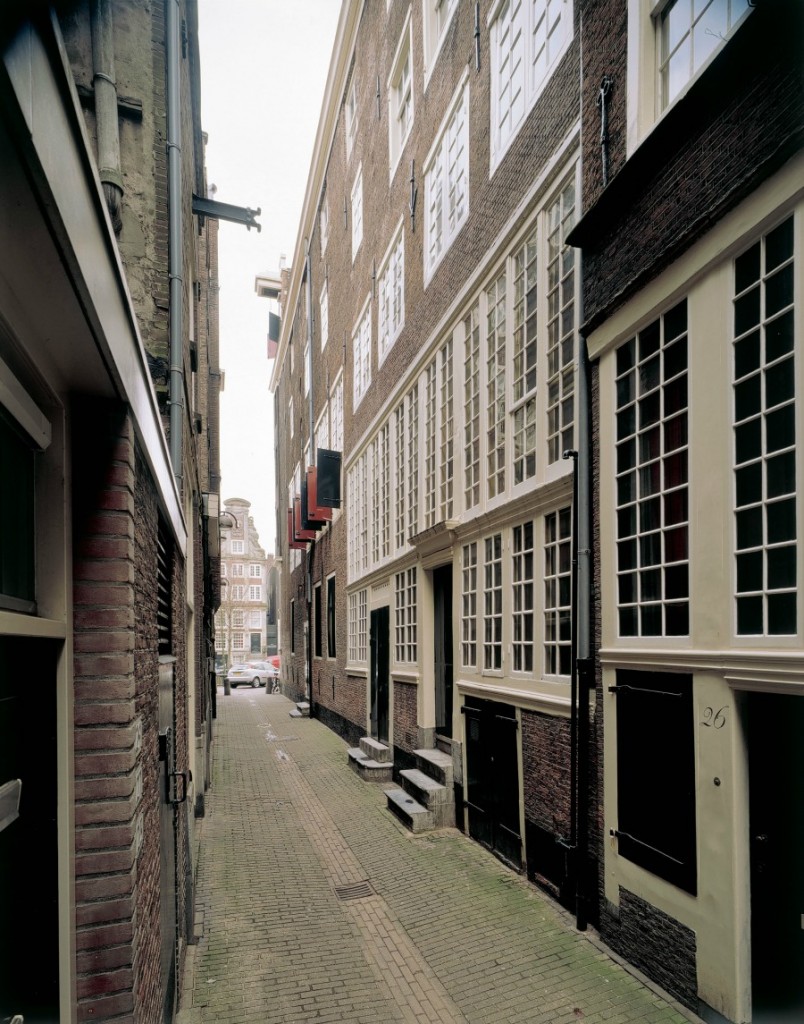 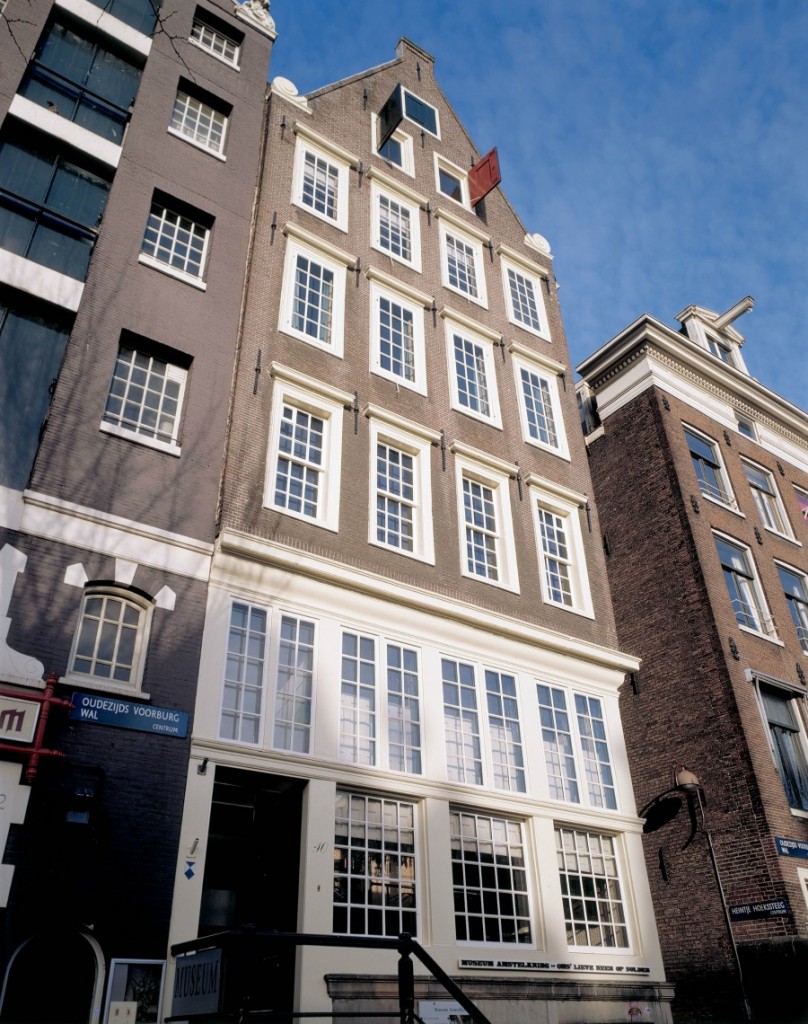 The other night we enjoyed the yearly MuseumNacht here in Amsterdam, a fun and different way of experiencing a good chunk of the city’s museums in a festive setting. While many of the 50,000 visitors cruising around the city opt for the big venues like the Van Gogh Museum and the Anne Frank House, the night is also a great opportunity to discover something new, a chance to discover the unexpected. One of our aims for the night was to visit the second oldest museum in town and see with our own eyes what the secretive rumour we kept hearing really is about. It was time to visit Ons Lieve Heer op Solder church – it was the occasion to venture into the heart of Amsterdam’s infamous Red Light District to visit ‘Our Lord in the Attic’. 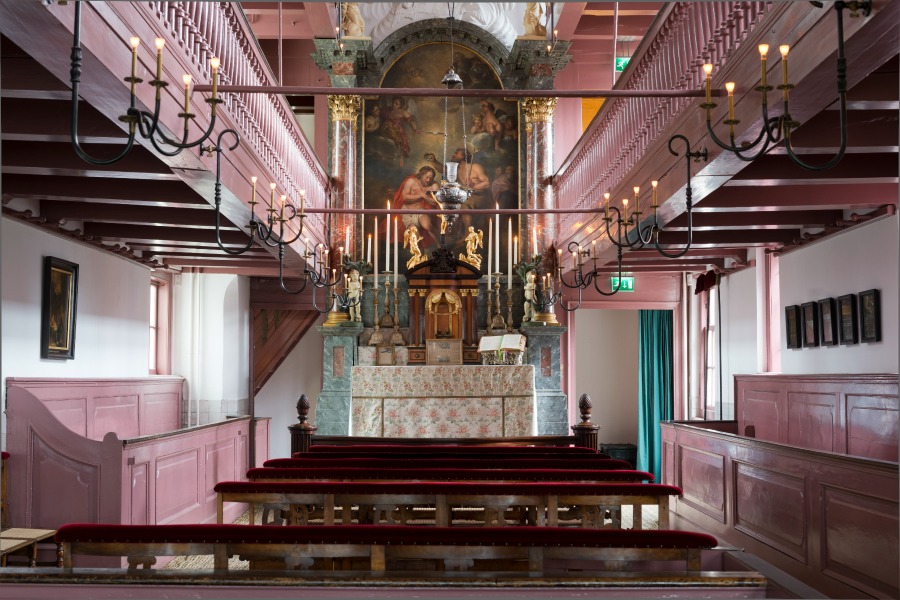 Without doubt, this is a hidden treasure of the city, where the word hidden isn’t only there for the literally emphasis. Amsterdam’s second oldest museum is well tucked away from view and its shear existence is the result of secrets, politics tainted by religion and religious belief tainted by politics. Today the Ons Lieve Heer op Solder church is Amsterdam’s second oldest museum, established already on April 28th 1888 – only the considerably more famous Rijksmuseum is older in the city of Rembrandt. Before that, for the span of a few centuries, this was the most important place for the city’s few remaining Catholics.

What today is a museum used to be a clandestine Roman Catholic Church, well hidden from the view of ordinary citizens, tucked away in one of the city’s typical 17th century canal houses. Like a true monument for Amsterdam and Dutch history in general, this single place can easily be used to symbolise a few centuries of the city’s history. 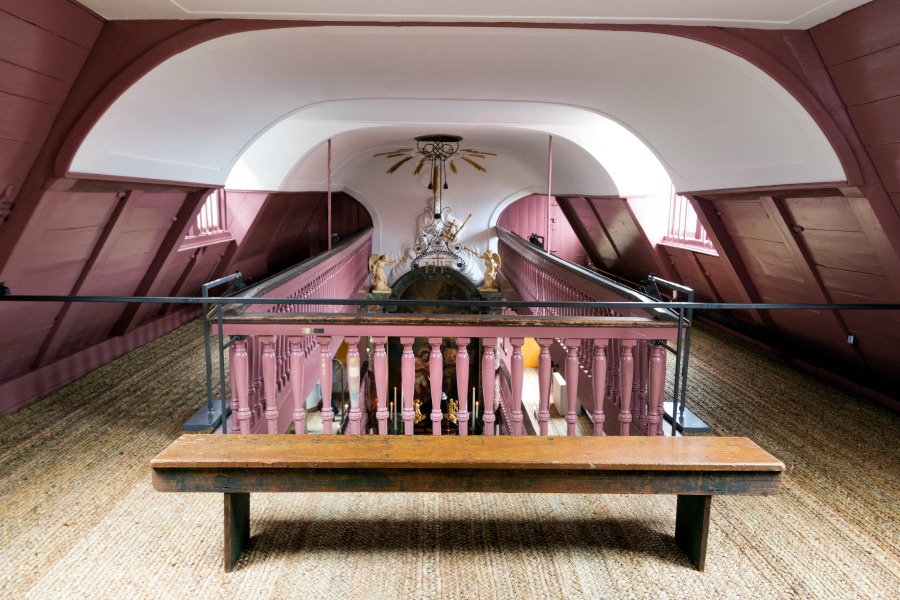 Approaching the house today, the museum is located on the 14th century canal Oudezijds Voorburgwal 40, you would be struggling to picture that you are heading towards a sight of century-old religious worship. But this is Amsterdam and on top of it, its “sin district”, so the shop windows here around won’t advertise your usual merchandise, rather services offered by practitioners of the “world’s oldest profession”. Although in general it is safe to say that as a visitor to the Red Light District you don’t need to worry too much about your safety, it is still a shady atmosphere where the modern days’ inebriated “sailors” are cruising the area out on a binge and a “shopping round”, mixed out with curious tourists. Therefore, stepping in from the outside mayhem into the world of Jan Hartman’s Catholic Church hidden on the attic, it is quite a contrast. The metaphor of ‘heaven and hell’ would be close to many people’s mind, we are sure about that.

The history of the Ons Lieve Heer op Solder church starts in 1661 when the rich local merchant, Jan Hartman, acquired the prestigious property. The new owner of the house immediately restored it, converting the ground floor and the basement into a shop and storage room, a perfect façade for what else there was to come. The building comprises of the main house on the canal and two rear houses, a typical solution in the city where space was fairly limited. On the second floor Hartman installed his reception room, for that time an extravagantly decorated gathering room, today to admire just like in its former glory. But the real reason for the building’s new existence was to be found on the floors above: Hartman, a devout Catholic, built a clandestine house church for the city’s Catholic parish.

The Dutch Reformation hit Amsterdam’s Catholics hard. In the years of the Alteration from 1578 onward, it wasn’t easy being a practitioner of the Catholic faith in the city. The combination of the Reformation sweeping through Europe and the liberation from Catholic Spain as the final outcome of the Eighty Years War, turned the religious tide against Catholicism in the country and it became illegal to practice Catholicism anywhere in public. 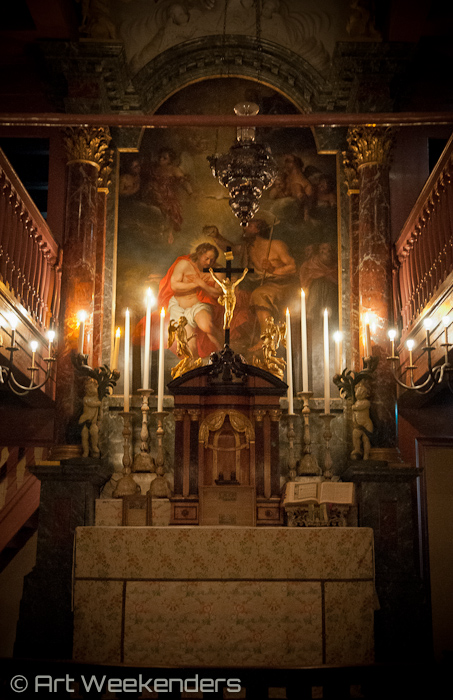 Tolerance in the Age(s) of Hardships

While it was forbidden to practice Catholicism in public and the devout were forced to practice in clandestine house churches – “schuilkerken” – the Protestant local authorities knew all along about the existence of Hartman’s hidden church on the attic. As so often in Amsterdam’s history, tolerance was the method of choice and it was easier to turn a blind eye already back then, than to obstruct diversity. This has been a feat that made Amsterdam famous and a heritage the museum even today gladly links back to.

By 1887 times in Amsterdam changed even officially and Catholicism was once again openly allowed. The changes meant that the house church with its 150 seats got replaced by the grand St Nicholas Church a few minutes further away across the city’s Central Station. After the move a group of local Catholics bought the building and in April 1888 opened it as a museum open to the public on weekdays. Today it is the second longest serving museum of the city, after the Rijksmuseum, which has been the city’s pride ever since 1808. The ‘Ons’ Lieve Heer op Solder’ stayed largely out of the limelight, but nonetheless always maintained its role as the symbol for local tolerance.

Even today, the museum proudly draws on its history of tolerance. In these times when the acceptance for the foreign is diminishing, the openness for other cultures weakens around Europe and in the world, this pride remnant from the past continues to be an important reminder for us all. Staying open-minded and accept diversity is a characteristic that we can only draw parallels from through our history that ultimately enriched our lives. 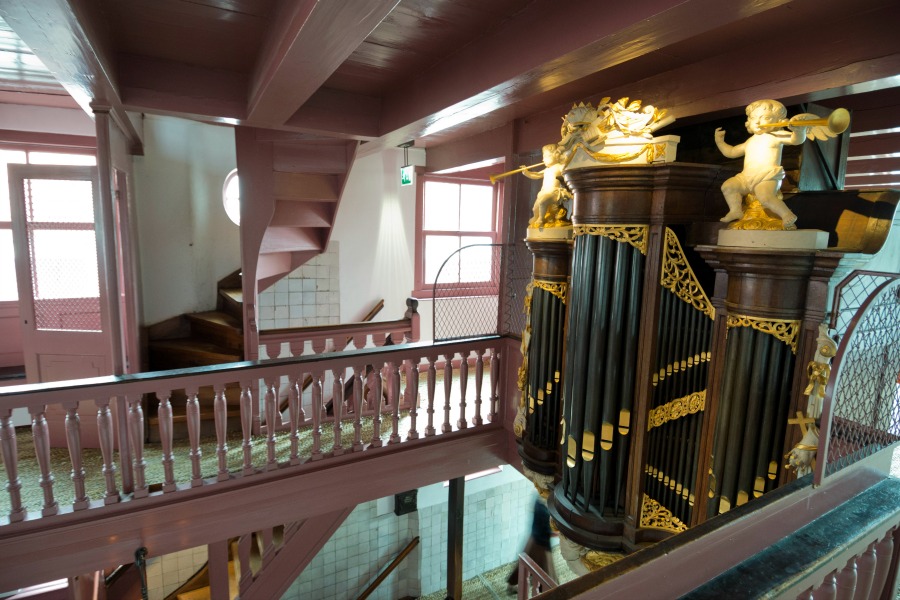 Visiting the museum of the Ons Lieve Heer op Solder church today is truly a time travel experience. Much of the way the place looks like today is the very same look the church had centuries ago. Sitting down in the benches and absorbing the impressions is almost bizarre, especially after entering the place just like any other Amsterdam apartment we who live here are familiar with. Yes, the chandeliers are these days lit with electrical candles, but you barely notice, and it doesn’t take any effort at all to imagine yourself back in time.

The museum doesn’t contain that many rooms: you mainly have the front room, the between room, the hall, the actual church, even a little chapel and the 17th-century kitchen that you pass on your way out. One of the truly strange parts of the building is the confessional room, placed and located in such a way that privacy for the confession of your sins must have been hard to get. But then again, this is the city of tolerance, who could possibly have such sins that they couldn’t be forgiven?

Amsterdam’s hidden church ‘Our Lord on the Attic’ is a truly unique experience, the ultimate hidden gem in Amsterdam and there’s no need at all to be the typical fan of churches, we promise. If you’d like to visit the location, it is just a few steps further form the more famous Oude Kerk, the ‘Old Church’, in the heart of the Red Light District. The opening hours are Monday to Saturday 10.00 – 17.00 and Sundays and public holidays 13.00 – 17.00.

While it’s a hidden gem, the museum can’t cope with large numbers of visitors, the building, the décor, furniture and art inside is extremely fragile. In just a decade the museum almost doubled the visitor numbers to the current 90,000 yearly admirers. Thus, act accordingly: don’t touch anything and keep calm.

The entrance fee to the museum is currently 8 Euros, 4 Euros for children. The Dutch Museumkaart is valid for free entrance and so is the I Amsterdam City Pass. You can learn more about the museum on their website here: OpSolder.nl.

Other articles in this month’s ArtSmart Roundtable:

The Imperial Treasury of Vienna by Christina from ‘Daydream Tourist’

The Life of St Nicholas in Stained Glass at The Cluny, Paris by Murissa from ‘The Wanderfull Traveler’

Away from the Crowds: 6 Lesser-Known Museums by Jenna from ‘This Is My Happiness’