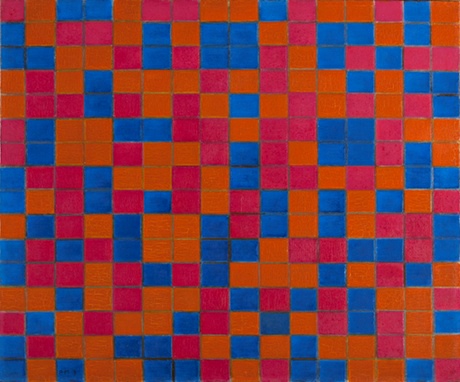 While the Artist Conquered England

2014 marked the 70th anniversary of the death of the Dutch modernist, Piet Mondrian, and while at home in the Netherlands the event was observed with relative discretion, across the North Sea in England the commemoration was reaching a real summer crescendo. There was not just one, but even two different exhibitions that opened the doors to the general public. But what facts about Piet Mondrian do we know?

The shows at the ‘Tate Liverpool‘ and the second one at the ‘Turner Contemporary‘ in Margate opened the doors to the public during the summer. Two exhibitions about the same artist with a different approach and focus, and somehow the two felt more like complementary exhibitions rather than competing ones. In a way it could be said that while the exhibition in Liverpool focused more on the artist and the working methods he applied, the Turner show emphasised Mondrian’s colourful grids, the technique he used and the way the artist changed modern art forever. The two exhibitions didn’t disappoint anyone, also for instance highlighted by the newspaper reviews.

With so much attention on Mondrian in England, we thought it can also be interesting for the rest of the world to look a bit deeper into who the artist really was. These days the Mondrian name is so famous that it can almost be considered a brand – some obviously even use it as such in design articles, both within fashion and for household products, like a Kleenex box (we do wonder what he would say to that), or as we saw when we looked further into the Dutch de Stijl movement – where Mondrian was one of the founders of – even houseboats. But who was the person really?

The complexities of the person behind the “Mondrian brand” are many and the spirit of the artist lives on in sometimes unexpected ways. Therefore, to extend the general knowledge about the artist here we’re sharing some facts we find highlight well who the artist was.

1. Mondrian considered his studio more than just a “workshop”

The artist was always looking for creating his own private comfort zone. Besides using his studio as his workshops, as artists tend to do, Mondrian also moved out his social life into the sphere of his atelier. That’s where he always entertained his guests, be it friends, clients, collectors and even the press. It was in fact very unusual to see photographs of the artist not taken inside one of his studios. 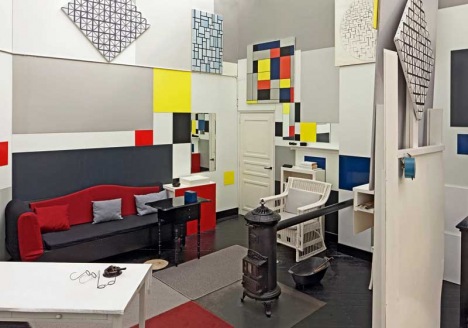 Reconstruction of 26 rue du Depart, Paris based on 1926 Photo by Paul Delbo
Photograph (from Tate Liverpool)

2. Mondrian was a private but Social person

Maybe not surprisingly after reading the previous point, Mondrian was a very private person who liked to have control over his day-to-day life. He wasn’t a fan of surprises and, therefore, he refused to get a telephone for as long as possible. Also for visiting him you needed to send a letter first instead of just showing up unannounced. But at the same time he liked to entertain people, was a fantastic host, very friendly and he loved jazz and dancing (although many accounts say that he was terrible at it, as also testified by Peggy Guggenheim). You just had to know when was the right time for each and every activity.

Mondrian – born in 1872 in Amersfoort in Central Netherlands – was under the patronage of his Uncle Frits for a long time, who also sponsored his art studies. Frits Mondriaan was a self-thought and fairly successful artist himself. During the first decades of his career, while travelling back and forth through the country, Piet Mondrian painted almost exclusively landscapes. But soon after he turned thirty he started his experiments with abstract art. His uncle and the rest of the family, being strong traditionalists and devout Calvinists, disapproved with this move, at the end resulting in a conflict that never got solved again.

I wish to approach truth as closely as is possible, and therefore I abstract everything until I arrive at the fundamental quality of objects. 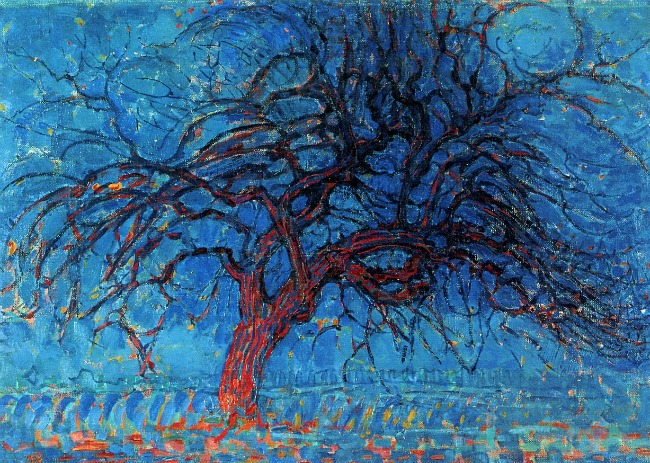 Among the facts about Piet Mondrian that most often gets asked is about the spelling of his name. The artist’s original Dutch name is spelled with double ‘a’: Mondriaan. However, he officially changed his name in 1912 when he moved to Paris, although he started signing his paintings as Mondrian already prior to that. When the change actually happened isn’t precisely documented (as far as we know) and not known what was the major driving force behind it. Nonetheless, it coincided with the conflict described above with his uncle, but it’s more likely that it was mainly driven by his desire to break lose from the past and be regarded an international artist.

5. Mondrian’s Vertical and HoriZontal Lines from the theophysical belief

The style developed by Mondrian, neoplasticism, is characterised by the use of the three primary colours red, blue and yellow (black and white are not considered as colours). What might be less known is that the lines are in fact the driving force in the composition and his aim was to create a balance between the vertical and horizontal lines: the horizontal lines represent femininity and worldly qualities, while the vertical lines are the symbol for masculinity and spiritual. An important fact to know; he never-ever used a ruler for getting the lines straight and what seems the work of quick execution usually could take several months to get finished. 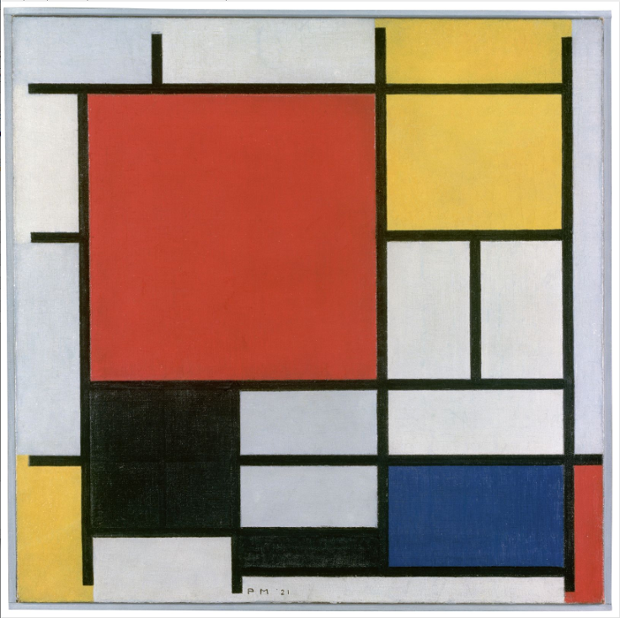 6. Mondrian Was a Theosophical Believer

The interpretation of the lines were not just a pure artistic whim of Mondrian’s. The interpretation was the result of his spirituality and his involvement in the theosophical movement. The main characteristics of theosophy is the idea to understand the mysteries of the universe and the bonds that unite it with humanity, and the divine. Mondrian’s involvement in the Theosophical Society got strong in 1908, not surprisingly coinciding with his move towards more and more abstract art. 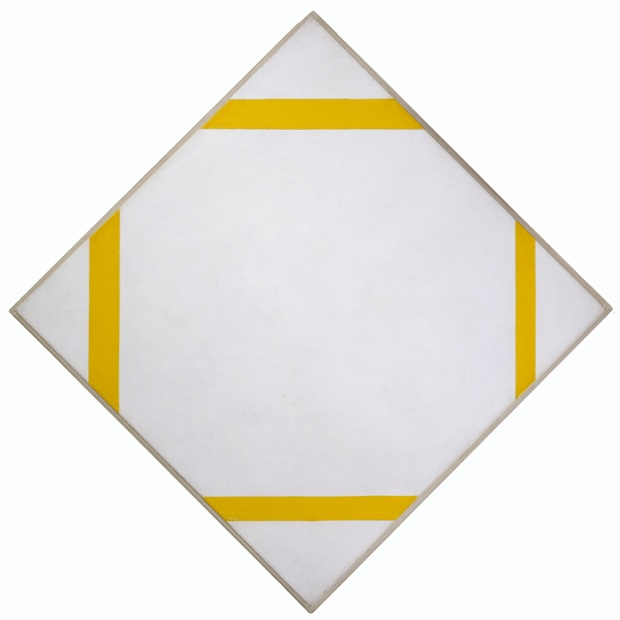 Mondrian was seemingly most of all interested in his art – and himself. Although there are many accounts witnessing to his ardent interest for women, he never married. In fact the closest he was seems to be during his final years in the Netherlands, prior to moving to Paris. While his change in style turned into the abstract, likely heavily influenced by his admiration for the cubists Picasso and Braque, he decided to move to Paris. When he jumped on a train right before Christmas 1911, not only did he turn his back on his established career in his home country, but also to his fiancee. Scholars later speculated that his complicated upbringing with stern family circumstances might have contributed to this, but he notoriously remained very private about it and there are no testimonies of his own thoughts on the subject.

8. Mondrian and de Stijl – Not Without the War

Mondrian moved to Paris in 1912, but already in 1914 he ended up being back in the Netherlands because of the dreaded First World War. While his time back in the country was in general characterised by reluctance and little joy, he came in contact with the Dutch avant-garde movement and especially Theo van Doesburg. Van Doesburg founded the art magazine ‘de Stijl’ and the movement that followed took the art-world by storm. Mondrian got strongly involved by writing several articles for the magazine and although not being the main face of the movement at the time, his neoplasticism – the red, blue and yellow composition  – soon became the symbol for the movement.

If it is faith, destiny or the intention of some higher forces, but the name Piet Mondrian is a perfect anagram for the very appropriate phrase of “I Paint Modern”. One of the small but curious mysteries of life.

The last painting that Mondrian worked on is the unfinished Victory Boogie-Woogie, painted in New York and nowadays to be found at the Gemeentemuseum in The Hague. Mondrian fled from Europe to New York in 1940, strongly fearing the Nazis who condemned his style. In New York the artist changed his style to a more vital one, influenced by real-life new York and the jazz music scene. He called this style boogie-woogie. His famous Broadway Boogie-Woogie, today at MoMa, is the most famous work from that era. Mondrian passed away on February 1st 1944 after a short struggle with pneumonia. 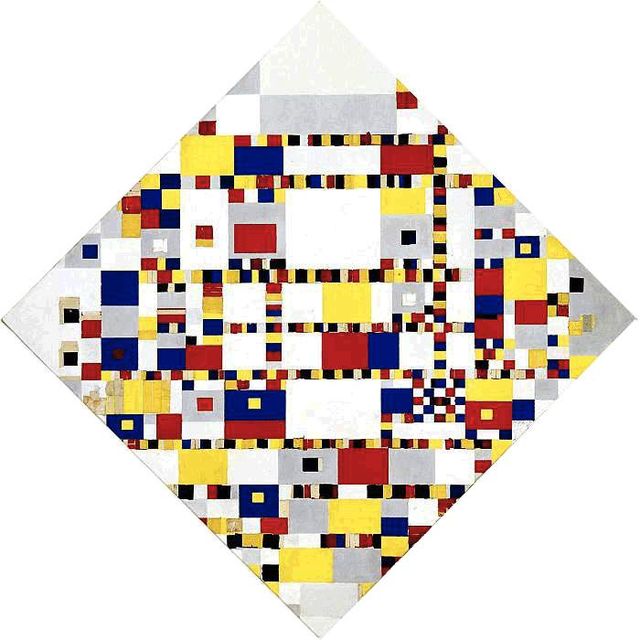 Are there any special stories you’ve hear about Mondrian that you think would be nice to share? Please leave a note in the comments for us to increase our base of facts about Piet Mondrian and his life.