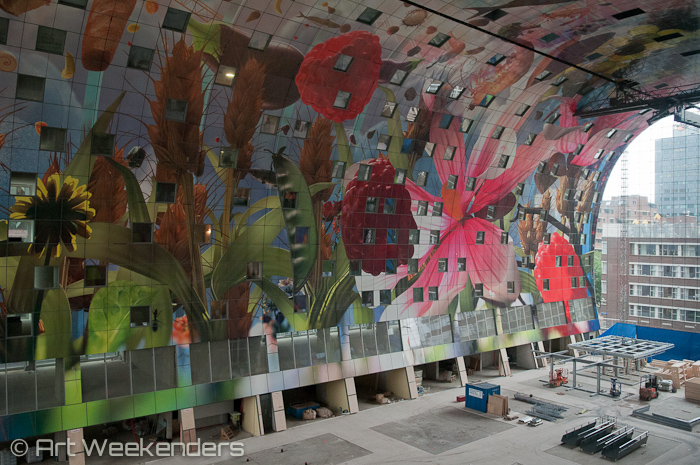 With the aim to be the largest indoor food market in the Netherlands, the new Rotterdam Markthal (Dutch for ‘market hall’) in the second biggest city of The Netherlands, sets the expectations for our visit to the premises situated near train station Blaak and the famous cube houses in the Blaakse Bos on a high level as from the beginning. 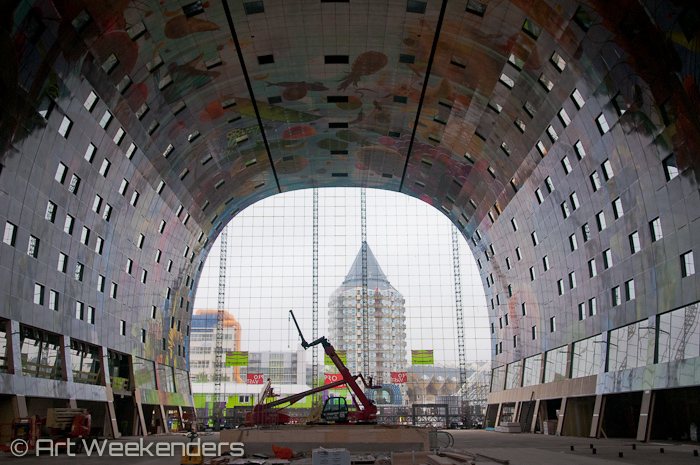 The inside and view from the Markthal in Rotterdam, The Netherlands

The outside of the massive building, at our visit in May 2014 in its final construction phase, reveals little of the surprises that will be awaiting the future shopkeeper, visitor or resident from the inside.

With a horse-shoe shaped construction, a surface-area the size as large as a football pitch and a height up to 40 meters, the Rotterdam Markthal sticks out from the rest of its environment and clearly positions itself as the new landmark of the Laurensquartier.

Inside the Markthal, Rotterdam, The Netherlands.

As part of the opening of the International Architecture Biennale Rotterdam we were lucky to have a chance for a look inside the Markthal under the guidance of its architect Winy Maas from MVRDV. A visit that revealed to us not only the architectural elements of the building, but also the future role the building will have. 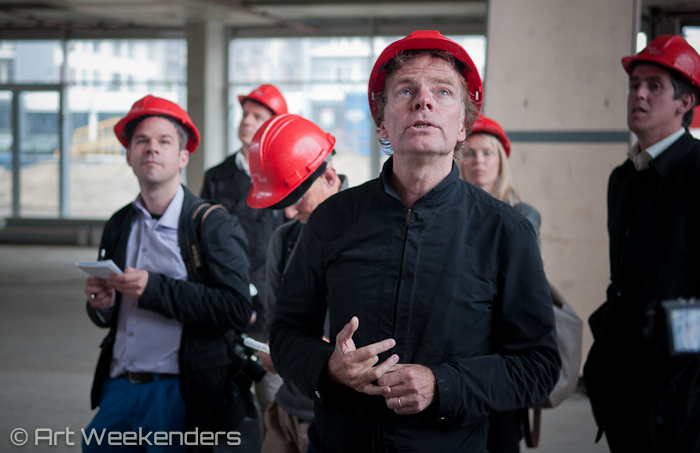 Architect Winy Maas guiding us through the Markthal – Rotterdam, The Netherlands.

The design for the first indoor food-market in The Netherlands is inspired by other indoor food-markets around Europe, such as La Boqueria in Barcelona and the Östermalmshallen in Stockholm, yet the Rotterdam Markthal clearly distinguishes itself by its modern, fresh design. This place is very different from the traditional markets in terms of both look and feel. 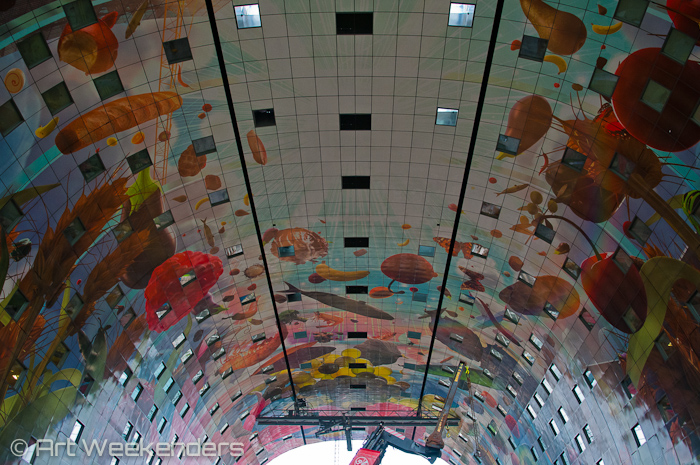 Artwork on the ceiling of the Markthal – Rotterdam, The Netherlands.

One of the biggest contributors to this fresh look is the curved ceiling, on which an 11,000 square metres big digital artwork of Arno Coenen – in fact, the biggest artwork in the world – with truly realistic images of fresh produce sold on the market is being depicted. Thanks to the usage of Pixar Animation Studios’ techniques to create 3D photo-illusions, it looks as if you walk under the open sky and huge fruits, vegetables, flowers and other produce are falling down on you when you look up. 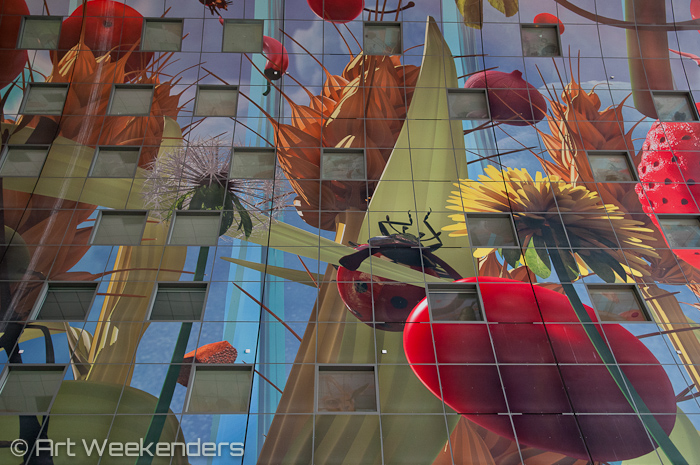 Part of the artwork on the roof and side of the Markthal – Rotterdam, The Netherlands.

While you’ll be able to shop for fresh produce on the market floor itself, on the sides of the hall and underneath the hall you can visit the restaurants, cafés and other food stores – including a cooking school. 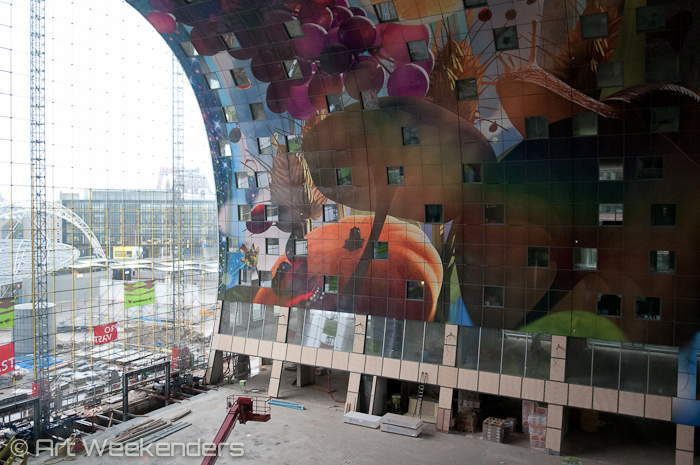 Inside the Markthal – Rotterdam, The Netherlands

But that’s not all. Above the hall ten floors with over 200 apartments have been created, giving people the possibility to actually live above the market hall, a concept not seen anywhere else in the world until now. 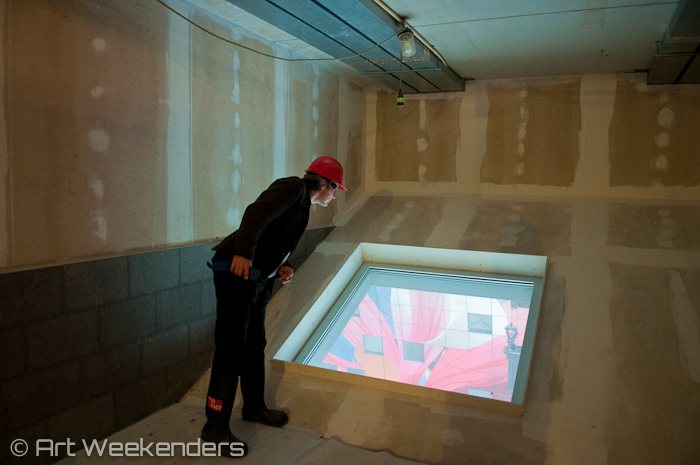 View on the market downstairs from one of the penthouses in Markthal – Rotterdam, The Netherlands.

With windows on the in- and outside of the apartments, as a resident you will have a look over the Maas (with a stretch), the Laurenskwartier and especially the bustling market itself. If you’re lucky to live in a penthouse, you can even see the market through your glass floor while having dinner on your terrace. An experience maybe not for the faint-hearted, we can assure you! 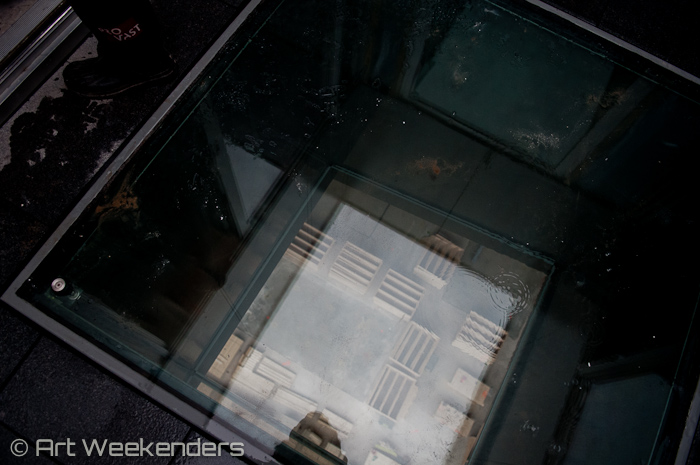 Glass floor in one of the penthouses of Markthal, Rotterdam, The Netherlands. 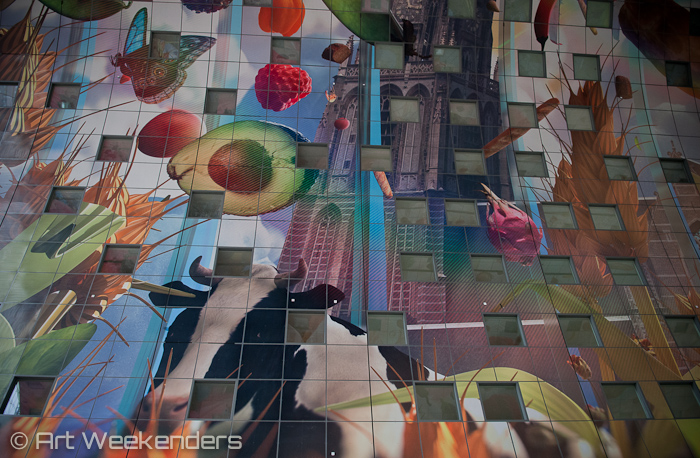 Part of the artwork on the roof and side of the Markthal – Rotterdam, The Netherlands.

Curious to see the inside of the building too? The Rotterdam Markthal is now open since the 1st of October 2014. It is located in between Binnenrotte, Hoogstraat and Blaak, within easy reach of the city centre by foot, public transport and car (with enough parking spots underground).

Other stories from Rotterdam and the International Architecture Biennale: