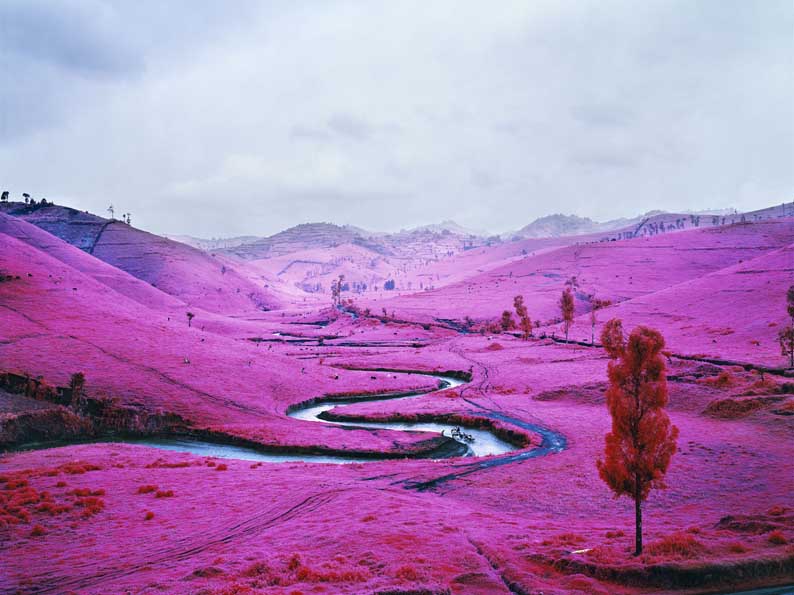 Art and Documentary from a War Zone

The main challenge any visitor to Richard Mosse‘s exhibition ‘The Enclave‘ will face is how to deal with the inner emotional conflict that undoubtedly will confront any observer. How can something so beautiful as what there’s on display reconcile with something so cruel as the motif for the work, namely the atrocities of the forgotten war in eastern Congo. Because both facts are very true and present throughout the exhibition.

Viewing the video installations and especially the accompanying photographs is really like studying a haunting but aesthetically attractive presentation, where the dominant magenta colour entrances the observer. At the same time, once you understand that the pictures show scenes and landscapes from the atrocity-stricken Eastern-Congolese war – which until today has claimed over 5.3 million victims in the 15 years since its outbreak – the whole beauty of the images simply turns bizarre to reconcile for the mind. How can war be beautiful? The very same conflicting thoughts circulated in the artist’s head during the process of his project, as retold by Mosse himself at the official opening at Amsterdam’s Foam earlier in March: linking beauty to the brutality of a war of that magnitude creates “an ethical problem in the viewer’s mind”.

is in fact the second part of Richard Mosse’s project from the war in Congo and his unusual application of this magenta-infused film for his work. The first time around, 2010-2011, Mosse travelled deep into the Congolese bush to come out from the experience with his photography series Infra

, presented in its final form as a photography book with the same title. The camera film used for the project was the unusual and since 2009 discontinued Kodak Aerochrome film, developed for the US military to register infrared light. In today’s digital age it’s more and more rare that photographers work with analog film, let alone utilising material developed for the war technology – all for the creation of art. But without the film, the project wouldn’t be what it is. Mosse first came across the film and it felt natural to use it to register the invisible of a conflict largely forgotten by the world at large. 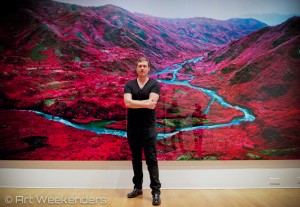 One of the conclusions Mosse reached during the process was the limitations of photo journalism and ultimately as photography as a story-telling tool. As the photographer himself put it:

Stories are the enemy of photography. A still photograph has a sort of endlessness about it. It’s something to be reflected upon.

Photo journalism and documentary making in general is often facing the problem of truthfully representing what is really happening and depicting the reality of being there in the moment. In that respect photography is often a limited medium. Returning to the war-stricken region of Congo two years later, the goal of Richard Mosse’s new mission was to produce ‘The Enclave‘ to represent the ‘Irish Pavilion‘ at the 2013 Venice Biennale. This time the project became a team of three with the addition of the filmmaker Trevor Tweeten and the music producer Ben Frost (with Brian Eno-collaboration fame). To tackle the limitations of photography as a medium, the project would thereby turn into a multimedia installation with focus on film and an accompanying soundtrack.

THE ENCLAVE’s deep Cut Into a warzone 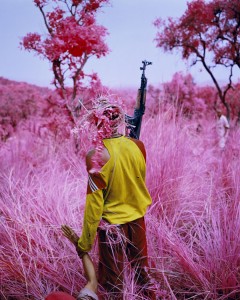 The videos used are made with outdated 16 mm infrared film, an unstable and sensitive material to work with, especially since it requires regular refrigeration, not an easy trick deep inside the African jungle. The outcome, however, achieved what the photographs couldn’t by creating an added proximity. The result is presented on six large-sized double-sided screens, positioned in angles to each other, thereby creating the impression of mirroring.

The actual film is 40 minutes long and it’s accompanied throughout with Ben Frost‘s haunting soundtrack, specially made for the installation, based on the composer’s impressions from the time spent in the war-zone. The actual movie starts with calmness around a quiet lake accompanied by the sound of the nature. Soon the stage changes and joined by Ben Frost’s dark soundtrack the movie becomes the witness to a complex and strange situation, where the fluorescent pink creates a surreal feeling.

READ MORE: The Art Weekender’s agenda for all current exhibitions in Amsterdam

‘The Enclave‘ – somehow symbolically and contradictory to how war usually is depicted – adds colour to a horrible crisis. Ever since the ‘Robert Capa-days’ (the famous Magnum war photographer) black and white photography has been the standard, but as per the words of Richard Mosse, war isn’t black and white, it is complex and difficult to understand and very broad. Photography at the same time – or maybe even art in general – is more finite and limited in scope. A project like this one helps somehow decomposing the limitations by creating an unusual situation where the possibilities for interpretation are unlimited: emotions are stirred up and conflicting and it’s up to the observer to create the understanding out of it without being constrained to the usual boundaries.

Ultimately, I believe, that’s exactly what is happening: for me personally it will be hard to ignore the situation in Congo, although we know it’s a desperate case with little hope in sight.

Richard Mosse The Enclave is one of four exhibitions currently on show at Amsterdam’s Foam. Here you can read about the three others as well.