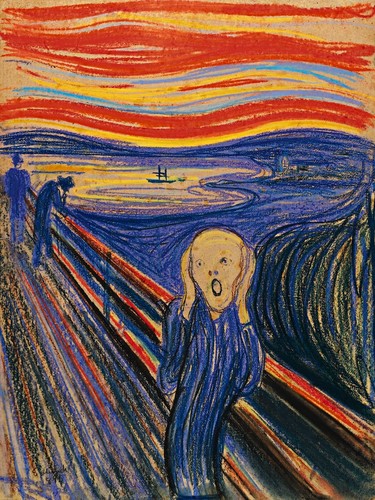 [Tweet “How many Scream version are there? Edvard Munch’s most famous painting explained.”]

How Many Screams to Count?

If you’re visiting Oslo, it will be inevitable: you will be attracted by the force of this painting, this ‘Mona Lisa of our times’, as referred to by Arthur Lubow from the Smithsonian Magazine. The spirit of ‘The Scream’ will be all around you and you will want to hurry to it, to see it for yourself. The thing is, though, there are a few of them. So which way to go and what painting will you actually be looking at, how many Scream versions are there?

For some it might come as a surprise, but in general it’s a pretty well-known fact that ‘The Scream’ is a work that exists in several versions, but surprisingly often the counting isn’t going as it should and you get conflicting information. Or maybe we should say that the problem is often that when ‘The Scream’ is discussed, the tendency is to talk about it in singular, easily forgetting about the other versions:

‘The Scream’ got stolen – which one?

While the motif and the reason of being is the same behind all versions of it, they all have their own different histories and facts to tell. Actually, they also create different emotions, even though the anguish remains the dominant emotion transmitted through all of them. Therefore, for the sake of order, let’s sort out what is what.

As all works of mythical proportions, there are quite many assumptions circulating around ‘The Scream’. As often, the origin of and the source to an artwork is the matter most difficult to figure out entirely, unless the artist himself reveals the clear explanation – if there is one. Munch did indeed leave clues behind, but the full account is still not there – and maybe just as well.

What remains clear though is that the spot depicted is the scene of a real life location in the outskirts of Oslo, nearby the Ekeberg hill southeast of the city. Since this spot is very real, it’s actually a favourite location to track down for visitors. Without spoiling the fun for anyone, we can say that it’s both easy to find and difficult to know exactly where it is – but by all accounts, it’s worth the effort to go out of the way to find that bit of extra connection to this work of mythical proportions.

Or how was it now again: it’s not only ONE work we should talk about, right?

When talking about ‘The Scream’ as paintings, there are four versions commonly talked about. Which one was the first is to this day hidden in doubts, but one thing is clear that Munch painted the first two versions in 1893.

1. The Oslo National GAllery Version From 1893 – Tempera on Cardboard

This most well-known version is the one that today can be found in Oslo’s National Gallery (Nasjonalmuseet). This is the copy that got stolen in 1994, to fortunately be recovered three months later, almost unscathed.

This Scream was done in tempera on cardboard and it’s often argued that this is the first version painted by Munch, but there’s no evidence behind this claim. 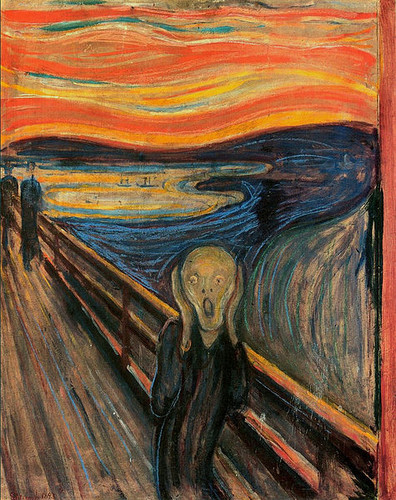 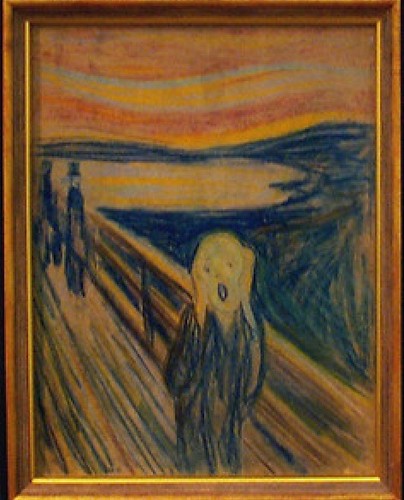 2. The Munch Museum version from 1893 – Crayon on cardboard

One of the versions that can be found in the Edvard Munch Museum of Oslo is the least glamorous one – if that’s a term that can be used in this context – out of the four that exist, mainly due to the impression that it comes across as slightly unfinished. Its colours are not especially vibrant and the whole painting appears as a bit washed out.

Many argue that this was the first version painted. There might be something in it; since it feels unfinished it could be that Munch wasn’t satisfied and put it aside, but that’s just pure speculation. Whatever is the case, this Scream-version has avoided major drama during its lifetime, no theft or other incidents that made its existence more remarkable than just… its  sheer existence.

3. The private collection version with a nice price tag from 1895 – Pastel on cardboard

On a spring day in 2012 this was the painting that turned into the world discussion topic of the day and made headlines across the globe. Why? Well, anything with a price tag of US$ 119,922,500 will do that in our world, that’s just a simple fact. This version of ‘The Scream’ has been in private hands ever since 1937, thus barely ever since with any appearance in public light, except with a short spell at New York’s MOMA from October 2012 to April 2013, soon after it exchanged hands. If you missed the chance of seeing it then, you will likely have to wait for a long while. Unless, of course, you have a private viewing at the new owner’s – the financier Leon Black’s – residence.

This version is the most colourful of the four, where the red sky is more dominant than in any of the others and the blue is almost signalling that Munch by 1895 came to an increased peace with himself and the troubles that inspired him to paint it. The painting is to this day in its original frame and what is extra special with it is that Munch’s poem about the motive for his painting is engraved on it.

I was walking along the road with two friends. The Sun was setting –
The Sky turned a bloody red
And I felt a whiff of Melancholy – I stood
Still, deathly tired – over the blue-black
Fjord and City hung Blood and Tongues of Fire
My Friends walked on – I remained behind
– shivering with Anxiety – I felt the great Scream in Nature 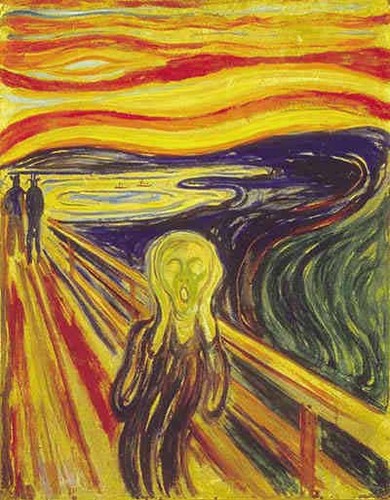 4. The Munch Museum’s Replica from 1910 – Tempera on Cardboard

In 1910 Edvard Munch returned to his old motif almost from two decades earlier and painted a new version of it, likely triggered by the fact that the other versions he made were sold. This version can distinguish itself as the version where the main figure has no eyeballs, making him in a way more expressive in the anguish.

The main distinction of this painting is though that it’s damaged in the bottom corner, due to a complicated drama: in 2004 this version was stolen from the Munch Museum and during the two years until it was miraculously recovered, the thieves can’t be said to have cared much for the state of the painting. This last detail of carelessness also triggers speculations for the claim that in fact the painting was only stolen to divert attention from a large bank robbery in the northern town of Stavanger. The good news is that in 2006 it was recovered and despite the damage it suffered it can be admired again at the Munch Museum in Oslo.

By the way, did you notice that all versions are painted on cardboard? While in the beginning this came likely out of necessity – cardboard was used instead of canvas for saving reasons – later on Munch still had a preference for the material, even though he easily could’ve afforded to buy canvas by then.

What about the prints?

If you thought that that would be it, you might fool yourself. Edvard Munch also made a lithograph stone of ‘The Scream‘ motif while living in Berlin in 1895 and it’s estimated that some 45 prints were made before he hastily had to return to Oslo for his brother Andreas’s death. Some of the black and white prints have been painted over by Munch, which was a very common work method he employed. Upon his return to Berlin it turned out that the lithograph stone was destroyed by the printer he left it with, who re-used the stone for a new motif. 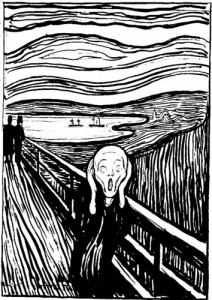 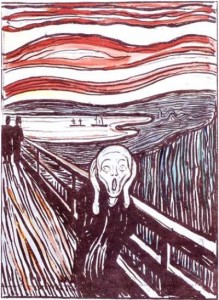 Especially when the version of ‘The Scream‘ got sold at Sotheby’s in 2012 – remember, the third version presented above – it has often been discussed by scholars if the value of the painting would’ve been even more if there only would’ve been a single version of the painting available. This is of course pure speculation we never going to have the answer for. It could in any case also be argued that having the different versions around might have created the myth only more vibrant.

‘The Scream‘ in today’s world is legendary, somehow it is one of those paintings that speaks to everyone, there’s so much emotions involved in it that it’s hard to be indifferent to it. Munch was always considered as a symbolist in his art, but paradoxically this work is considered the symbol for the expressionist movement, an art wave that really only kicked off for real some ten years later in Germany.

The feelings expressed by Munch with his painting are a favourite topic of experts and amateurs alike. Most official explanations tend to reflect back to his visit to the mental asylum where his sister got institutionalised. While this might be true, the explanations coming from Munch’s own words don’t directly refer to that case. That episode took place in 1892, thus the year before the actual original painting was made, but that’s of course no guarantee for the opposite either. The figure in the painting has also been often discussed, there are even those who are convinced that the inspiration for it is a Peruvian mummy that the artist saw in a Florentine museum. As all great paintings, with time the mysticism only increases and the explanations might tend to be more of a sensationalist nature.

Whatever is the case at the end, the fact of Munch’s troubled life surely remains a good part of the explanation, whatever the actual trigger was a sick sister, a mummy or the general torments of his daily life. But the outcome has captured us all forever.

You can visit the Munch Museum and the National Gallery in Oslo, where you’ll find three of the Scream versions described above and some of the lithographs, among many other works. For further details, please visit our museum guide for Oslo.

To stay on top of new stories and information – and to support us in our work – please follow us on Facebook, Twitter or Google Plus. Thank you!