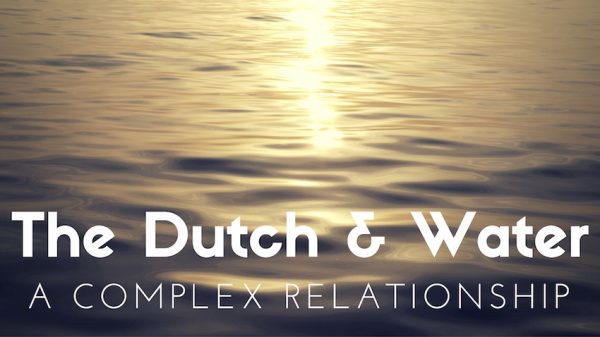 A new month has started again, meaning it’s time for a new ArtSmart Roundtable! For those unfamiliar with the ArtSmart concept: we’re a group of culturally focused travel bloggers from around the world, once a month writing about a common topic. The topic for this month’s ArtSmart Roundtable is ‘water’. Here on ArtWeekenders we decided to reflect over the complex relationship the Dutch have with water, as shown through art made as from the 15th century until today.


Water is a complex phenomenon. Without water we human beings wouldn’t exist. Without water we wouldn’t be able to survive, water simply means life. Water was also the mean that made it possible to travel to undiscovered parts of the world we previously couldn’t reach.

Yet, for the inhabitants of The Netherlands the relationship with water is even more complex. With a large part of the country situated below sea-level the Dutch have always had to fight the water and find creative solutions to live with it. Thus, it’s not more than natural that through the decades Dutch artists often used water as a topic for their art works, putting this challenging relationship centrally, just as it has been in life in general.

One of the most recent examples of this is the multi-media installation of the artist Daan Roosengaarde at the Museumplein in Amsterdam in the spring of 2015, called Waterlights. During a number of days the whole square – around which Amsterdam’s most popular museums are situated – was virtually flooded during the latter part of the evening, to demonstrate and create awareness how this part of Amsterdam – and large part of The Netherlands – would have looked like, if the water would have been able to run freely without human intervention.

Nowadays it’s often forgotten, but the fact is that some twenty six percent of the country is situated several meters below sea-level (the deepest point being 6,76 meters) and that this little country would have been even smaller without the invention of the dykes and the like. 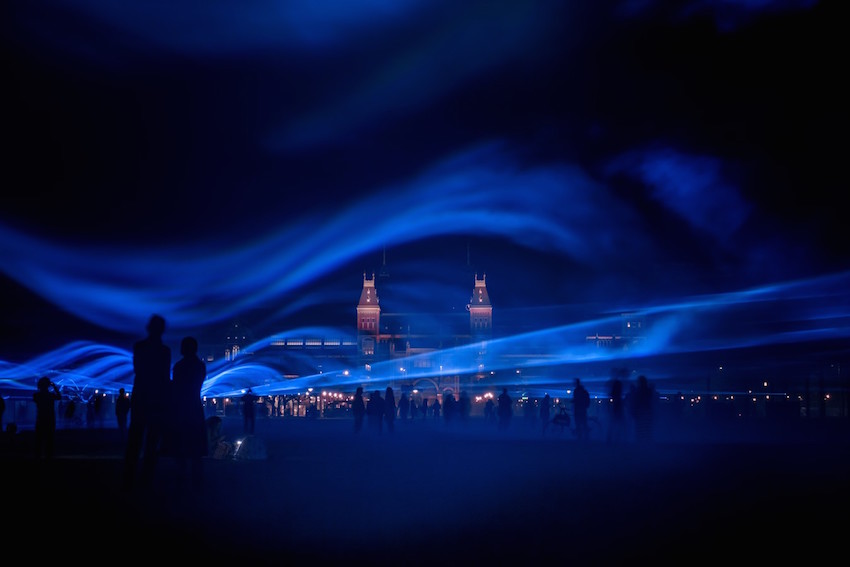 The occasion for this spectacular temporary exhibition by Daan Roosegaarde was closely linked to the Rijksmuseum’s purchase of the painting ‘The Breach of the St. Anthony’s Dyke’ by Jan Asselijn, a 17th century Dutch painter.

When in 1651 the Dutch coast was flooded by heavy storms, Amsterdam wasn’t spared. The dykes around the city, among which the St. Anthony’s dyke, breached and soon enough large part of the city was inundated. Being a witness to the flooding, Jan Asselijn painted different versions of the disaster, of which the painting acquired by the Rijksmuseum is said to be the most dramatic one. 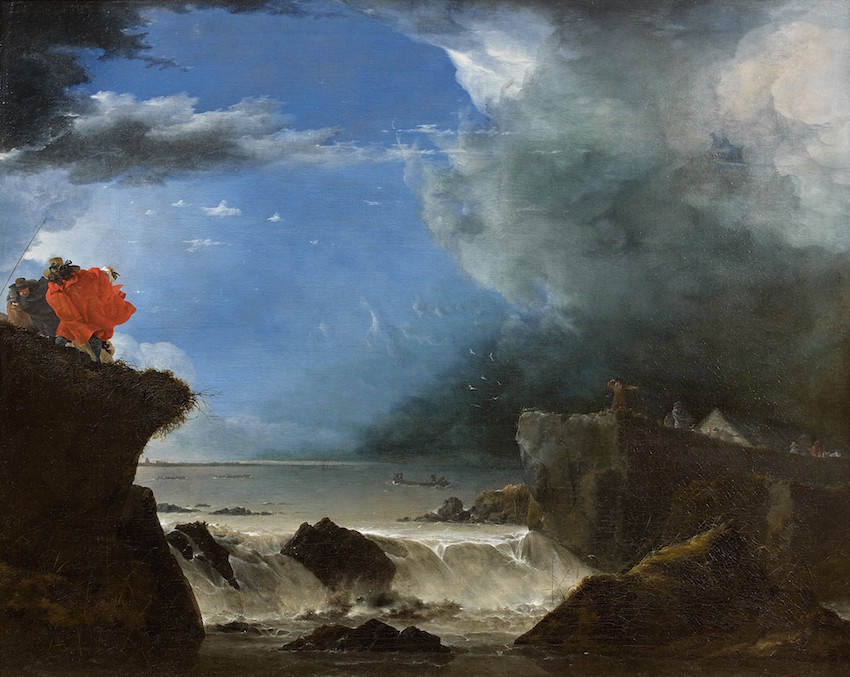 Jan Asselijn -The breach of the St Anthonis dyke in Amsterdam, courtesy Rijksmuseum

As the Dutch have always been surrounded by water, the breach of the dykes around Amsterdam in 1651 was not an isolated event, as various paintings and drawings part of different Dutch museums also tell us.

The below altarpiece depicting the Saint Elizabeth’s flood by an unknown painter, which can also be seen in the Rijksmuseum, tells about the flooding of the country on the feast day of Saint Elizabeth in 1421 for example. This flood is said to have been one of the worse floods taking place in history ever (ranking 20th in the list of worst floods worldwide), flooding numerous villages in the southern coastal provinces of South-Holland and Zeeland and causing thousands of deaths. 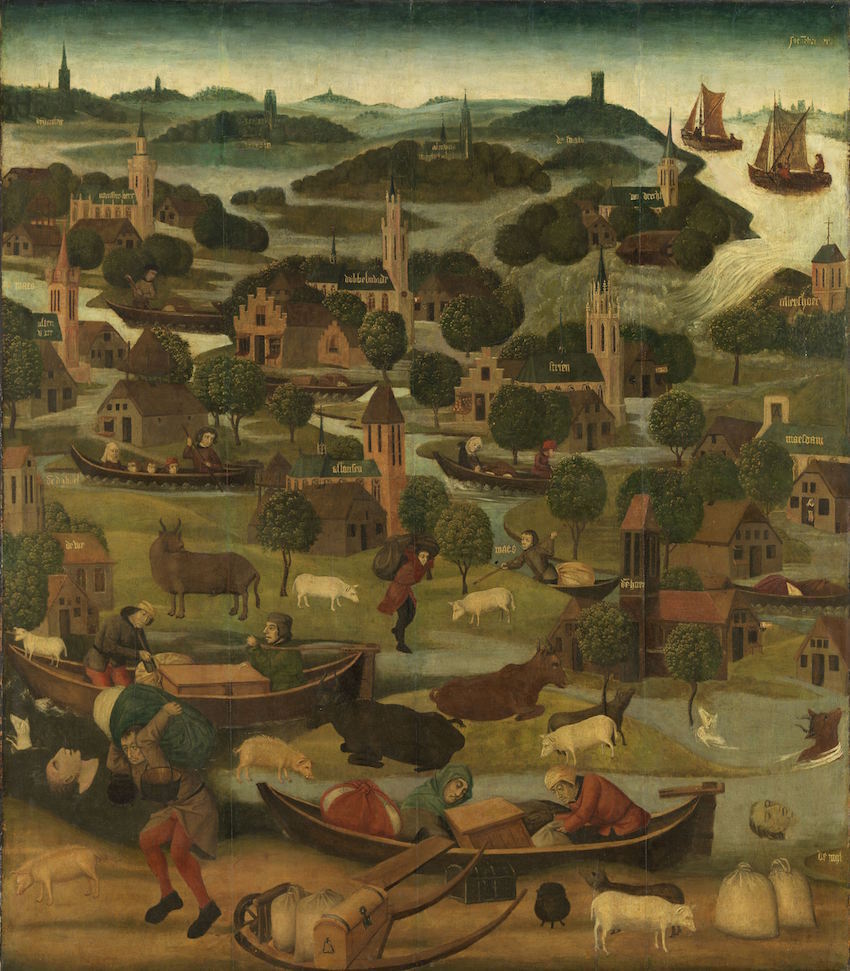 The right panel of the altarpiece depicting Saint Elizabeth’s flood, courtesy of Rijksmuseum.

Whereas the story of the altarpiece mainly seems to emphasize the way the people dealt with the flooding, other artists like Reinier Vinkeles and contemporaries especially depicted the disastrous effects of the different inundations they witnessed around the country, like the destruction of houses, the flooded land and the people fleeing. 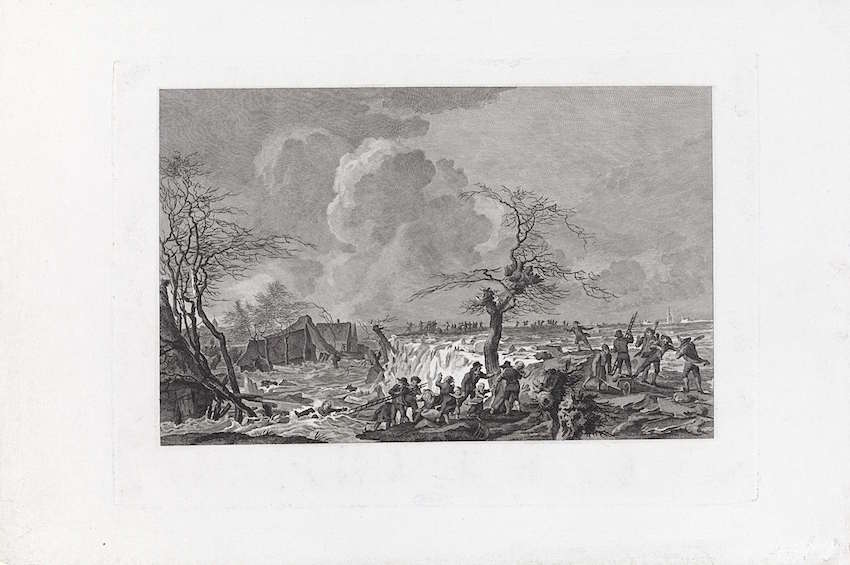 Another exceptional example of this is the cartoon-like painting by Johan Veltens, acquired in 2007 by the museum Het Valkhof in Nijmegen (in the east of the country), which accounts of one of the last major floods in the east of the country in the 19th century. This painting, consisting of in total 25 smaller paintings, depicts how in 1855 numerous villages in the Gelders Valley and the countryside between the Maas and Waal rivers were flooded with all the consequences thereof. 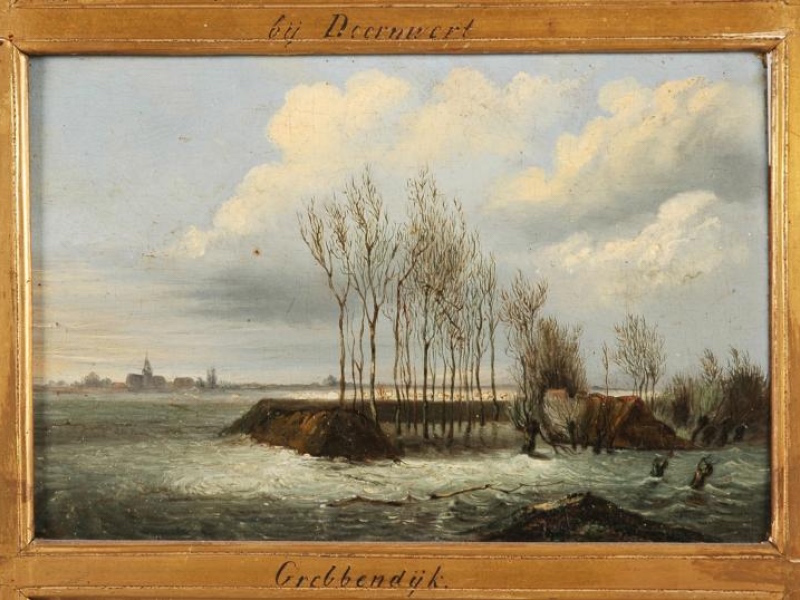 Although the country faced many more storms throughout the centuries, none of them would have the same impact as the one in 1953. During the North Sea Flood (in Dutch referred to as the ‘watersnoodramp‘) the dykes were again not able to resist the enormous pressure of the water and a large part of the southern west provinces of The Netherlands was flooded heavily. 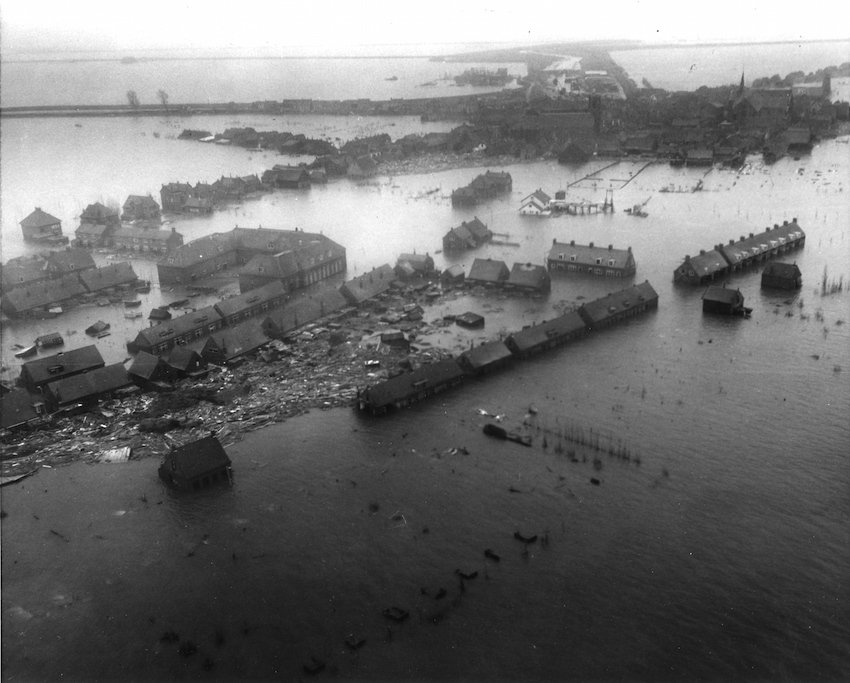 View from a U.S. Army helicopter over the village of Oude-Tonge on the island of Goeree-Overflakkee after the North Sea Flood

With a death toll of over 1,800 people and damages amounting to almost half a billion euros it was clear that more drastic measures needed to be taken.

This finally resulted in the Delta Works, an enormous project which would enable emergency closings of the mouth of the main rivers running through The Netherlands, namely the Maas, Rhine and Schelde, to prevent flood surges upriver. The complete works were finished as recently as in 2010 and have already been considered as one of the Seven Wonders of the Modern World by the American Society of Civil Engineers. 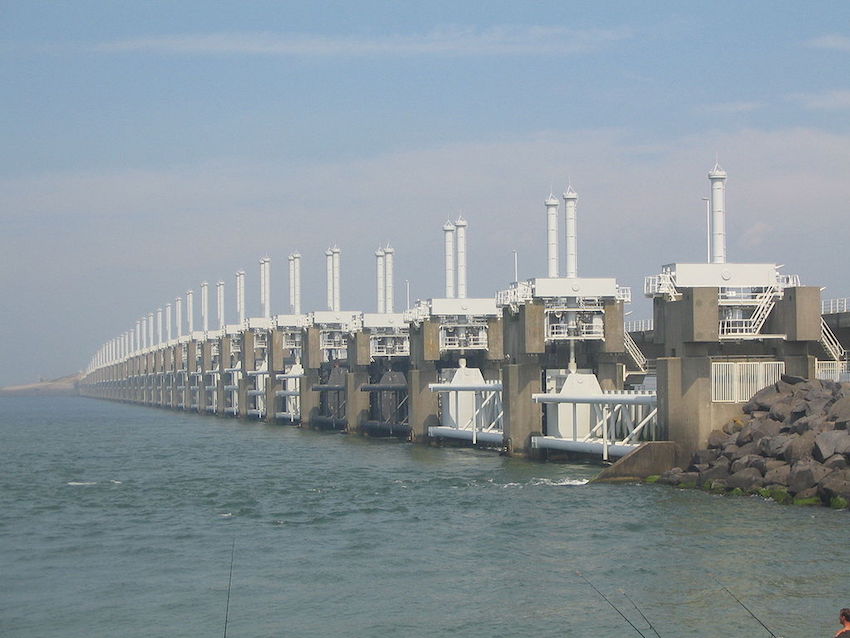 Although the country has been faced with many more flooding disasters during the last six decades, none of these have been as disastrous as in previous centuries thanks to all developments made in hydraulic engineering and the preemptive measures taken at different locations. As a consequence the complex relationship of the Dutch with water obviously also played less of a role in Dutch art in the second half of the twentieth century compared to before.

With the melting of the ice and rising sea-levels all around the world this is however almost a bit surprising, as the threat of the water remains for a large part of the country and thus, the battle of the Dutch with the water too. Works as the one of Daan Roosegaarde to create awareness of this topic are thus more than welcomed, so no-one forgets the continuous threat that hovers over a big part of the so-called lowlands. And indeed the entire world.

Do you happen to know any other contemporary artists putting this topic central? 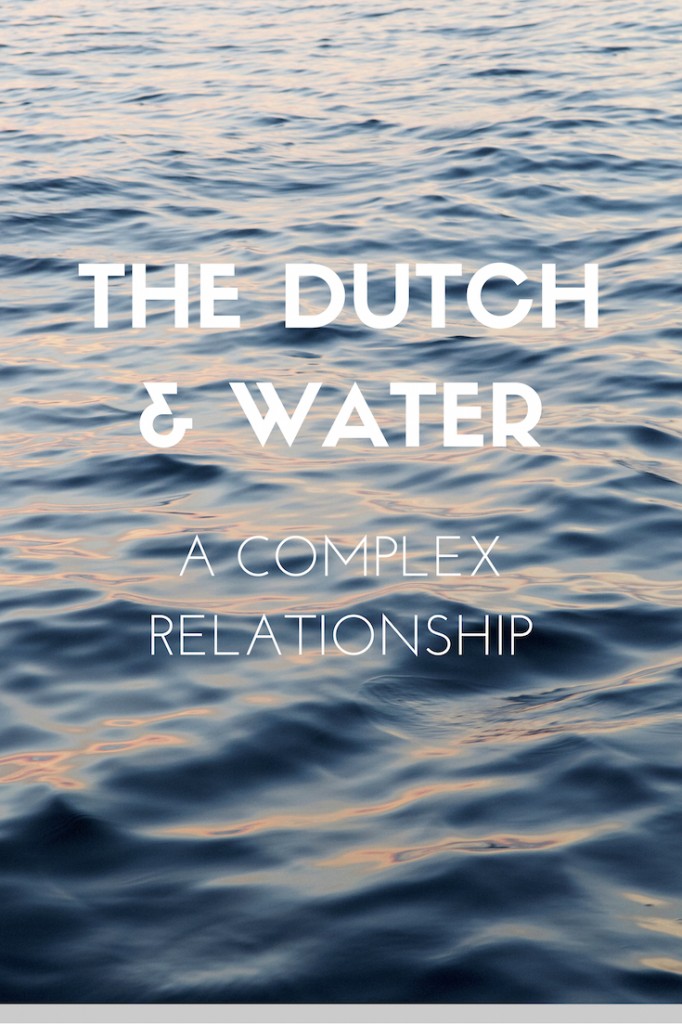 Don’t forget to also check out the other posts for this month’s ArtSmart Roundtable: