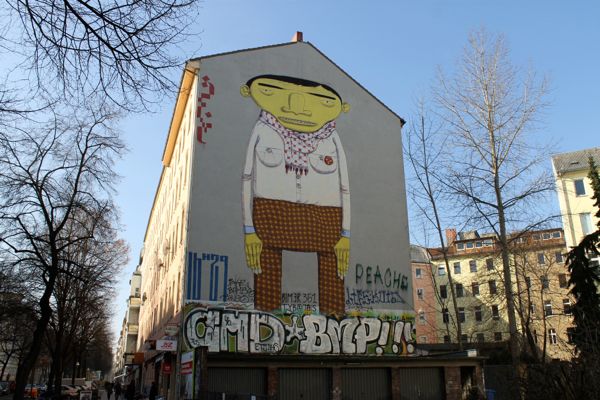 On a beautiful Sunday afternoon in early March, in fact the first real spring day of the year for the winter coat to be left on the hanger, we gathered outside the Starbucks in front of the Brandenburger Tor. A perfect day for a walk and a perfect spot for starting a tour through the recent history of the city. This monument is symbolising the history of the city in so many ways: from the end of the Second World War through the decades of the communist isolation, up until the divided city got re-united again, Brandenburger Tor was there. Starbucks on the other hand came later. But the history of the city is much more than a symbolic monument, and that’s what we were set out to do on this day: exploring it through its alternative culture. 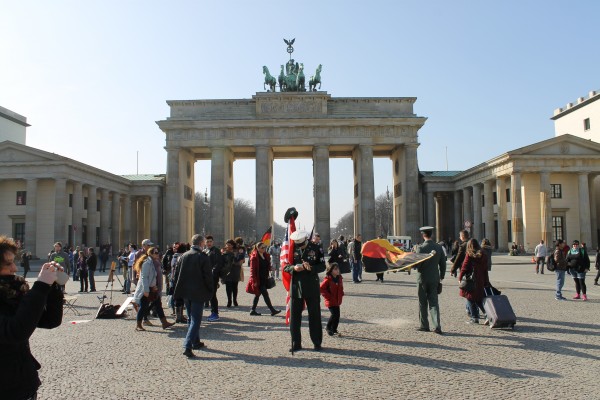 What a city is about is best discovered by living it. The second best choice is to explore it with the help of locals and studying what makes it tick, via stories shared and places visited. In Berlin it’s no secret that a lot of the soul of the city is closely linked to its alternative culture and a lot of the understanding can only be achieved through the eyes of locals. That’s why walking tours are among our firm favourites, no exception on this day in Berlin.

Since Berlin is a sprawling city, you’ll need the help of the public transportation system to make a walking tour efficient and the same was the case for us. After the initial introductions it was time to jump on the U-Bahn and head to the first stop. Hackescher Markt in the heart of the Mitte neighbourhood – the heart of the heart so to say – these days is a symbol of the transformation the city is going through. Today it’s a modern, beautiful square surrounded by attractive shiny buildings and the place of many inviting terraces, where the early spring is already greeted by locals and visitors alike in the accompaniment of a meal or a drink. Right after the fall of the Wall in 1990 this area was anything but: the buildings got abandoned after the former DDR-government vanished and for many years they remained empty. While the legal twists of figuring out the righteous owners of the buildings were sorted out, the area got taken over by squatters and immigrants in need for cheap accommodation. 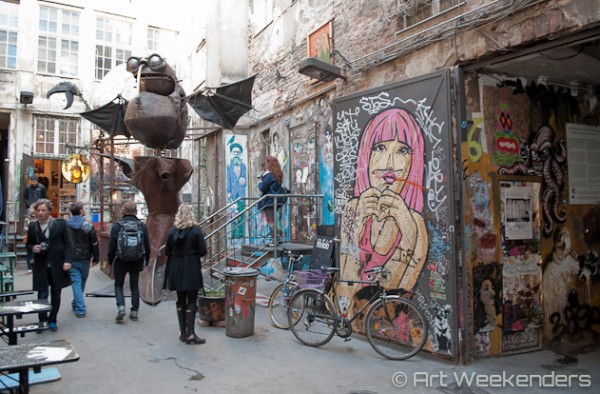 Already by the turn of the century things started to change and the transformation of the area commenced. Today only pockets of the old days are left, for instance the alley just a minute away by the Cinema Café on Rosenthaler Straße. This alleyway still witnesses of days gone by, a kind of memento of the past, but is also an active and buzzing hub for alternative culture in the German capital, with galleries, cafés, museums and plentiful of street art. Naturally, Berlin is the street art mecca and a big part of our tour is circulating around it. Our guide Mark, a British expat well-versed in the global street art and alternative culture scenes, shared some initial stories about the different techniques street artists use and then it’s all there to explore freely. Proof of most of the styles are all easy to find in this alley, which in many ways can be considered a rabbit hole into what the city has to offer further afield. 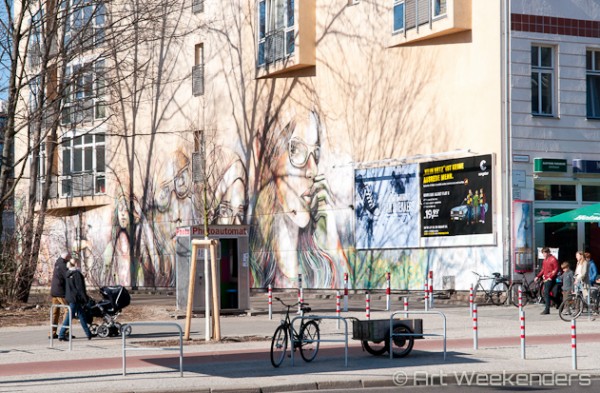 On the other side of this rabbit hole we found Berlin. Once out from the alley our tour continued further to the Friedrichshain neighbourhood and the RAW Tempel compound nearby the Warschauer Station, just on the edge of former East-Berlin. RAW Tempel today is synonymous with alternative culture in the city and it’s clear as soon as you get there. It’s a vast area of former railway workshops that like so many other buildings got abandoned in the wake of the collapse of the Iron Curtain, and like so much else across the former divide it took on its own life.

Since 1999 it’s maintained by the RAW Temple foundation, which transformed the area into this alternative haven it is now, where everything is based on voluntary work. For most people the place is mainly known for the nonstop nightclubs, but the area is much more: there are theatres, sport clubs, workshops, flea market, concerts – and loads of street art. The lease will be up in 2019 after a hard-fought negotiation extension, but all signs tell that a new time will follow thereafter. The area will likely be developed, like in many other places, and a ‘new’ Berlin will turn up here as well. What will happen to the socio-cultural centre then, move to a new location or it will be the end of an era? The future will tell. 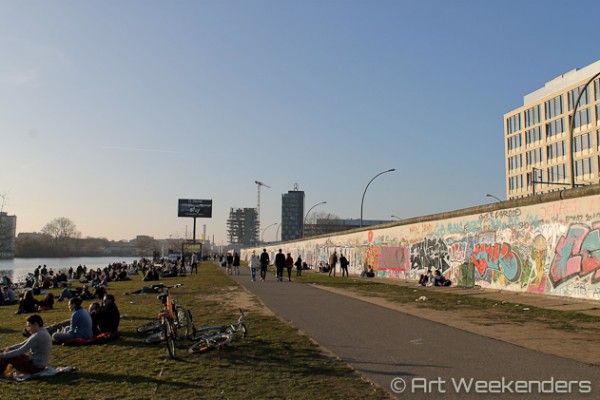 Just a short walk from there down to the Spree River’s northern bank we quickly reached the East Side Gallery. Most people live with the idea in mind that the Berlin Wall was totally demolished. While it’s true that of the 155 kilometres almost the entire wall vanished overnight (well, at least according to the legend) in November 1989, there are some remnants left: some for touristic reasons like around Checkpoint Charlie, others more as alternative art initiatives. The 1,316 metre long stretch between Mühlenstraße and the Spree got “saved” by an artist collective from both German sides and it was soon decided to invite artists to paint their murals on the wall and that way create an authentic monument of reunification. 105 of them did so and the eastern side of the Wall was turned into the biggest open air gallery in the world. Unfortunately, a lot of it got ruined later and only in a recent restoration they got revived to their former glory, still amidst some controversy.

Controversy exist there today as well. The riverside is now going through some rejuvenation efforts and not all of it is popular with everyone. The ‘Mediaspree’ urban redevelopment project has the goal to create a vivid cultural sphere on both sides of the river, but in many cases this is obstructing into the alternative socio-cultural scene. The biggest example for it was the construction of the O2 World multi-use indoor arena, which also meant the destruction of a section of the wall to make space for a riverside pathway for the owner’s boat. This being Berlin, naturally it raised some serious protests and the fight was on. Berliners tend to pride themselves to be socially conscious, and often enough they confront big commercial plans and fight the Goliaths of the corporate world. And often they win. 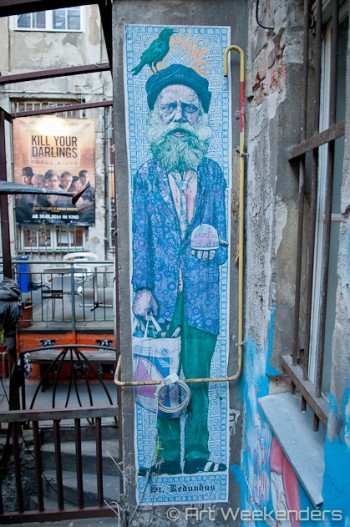 But Berlin is an indebted city and change will need to come – and is coming. The slogan “Sexy but poor” works just as long when bills need to be paid. We continued our tour by crossing the Spree River through the picturesque bridge that leads over to the Kreuzberg neighbourhood. Today the buzzword in Berlin is “gentrification” and this bohemian neighbourhood right now catches a good chunk of the references in regards to it.

What once used to be the cheapest part of town, today strangely enough turns out to have the highest rents in Berlin. Could it be that the market economy doesn’t seem to know political boundaries in Berlin? Partially true of course, but it’s also a very telling observation about what is happening in the city. Transformation is there to stay, but somehow it feels like Berlin will stay true to its alternative vein.

But just how? Will it move to new districts? Will future Alternative Tours lead the visitors maybe through the areas of Neukölln instead, the neighbourhood that today slowly takes over the bohemian, alternative aura? Is it only going to move geographically or it will involve a cultural shift? Will Berlin be “hipsterified”, people will metamorphose into an alternative lifestyle by night after coming home from their office jobs? Change is inevitable and will come to Berlin as well. Somehow it feels though that the city will manage to remain true to itself, it’s a city that went through enough and it’s not likely to turn its back on its past. Berlin is unique and the gut feeling says that it’ll stay so.

At the end, the merit of a tour like this is the discussion, in combination with the sights. When you say goodbye, part of the journey just begins, you leave with questions in your head and your inner exploration can start. Join an alternative tour and reflect over it for yourself, it’s truly a great way of enriching your view and gaining different perspectives on this great city. 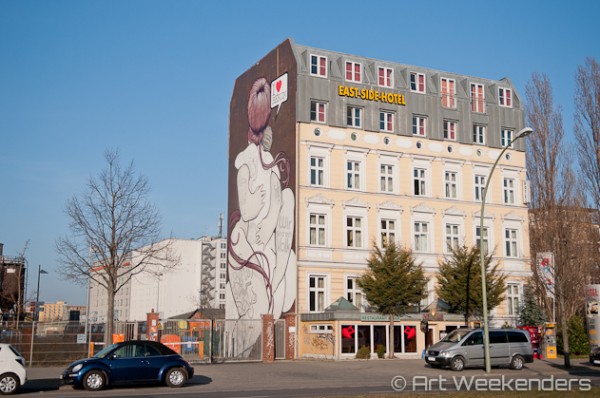 
New Berlin Tours has a selection of other tours, check their listings. Maybe the ‘Red Berlin’ or the ‘Third Reich Berlin’ are more the kind of history walk you’re looking for?

Disclosure: The tour we joined we received as complimentary from Sandeman’s for the purpose of research. Our opinion remains as always unbiased.

Your support is appreciated, please stay in touch by following us on our Facebook page or on Twitter.