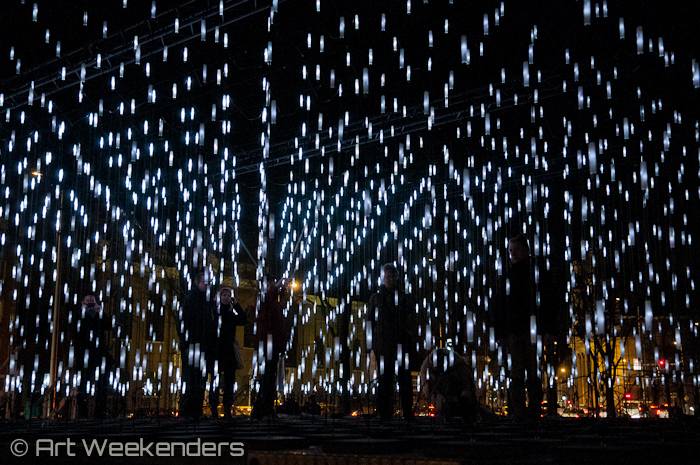 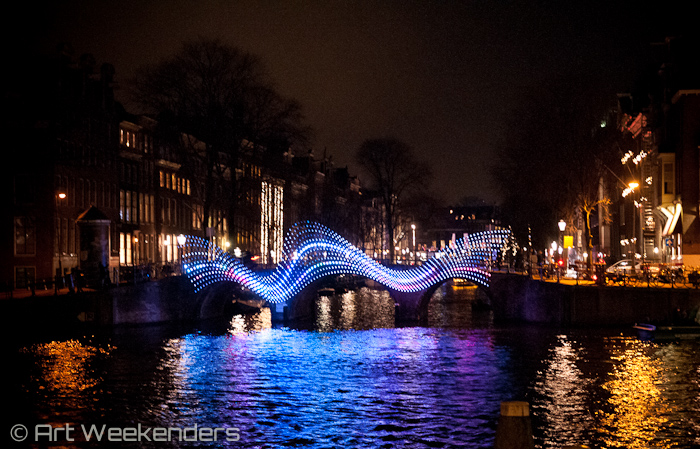 Yes, also in Amsterdam it’s soon Christmas again, which means the streets are fully decorated with festive Christmas decoration. As soon as it becomes dark the Christmas lights are lit everywhere, giving that cozy Christmasy feeling we’re all so familiar with. Yet, this is not all you’ll find in regards to lights in the city. You’ll also be able to see some enormous light sculptures, installations and projections of different artists lighting up the surroundings around the historic centre of town, from just shortly after sunset until late in the evening. 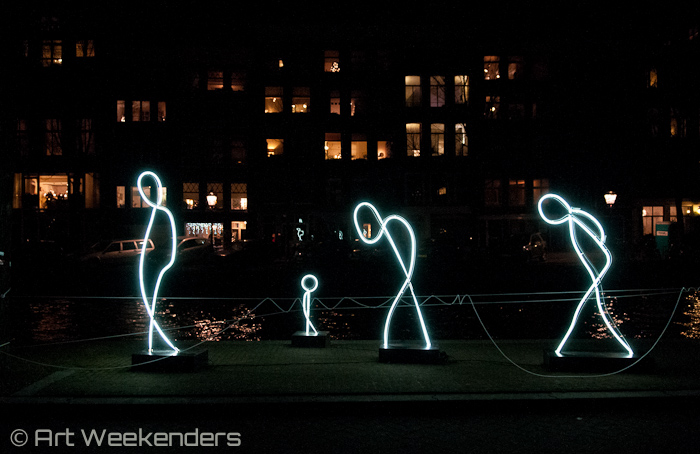 All these objects are part of the ‘Amsterdam Light Festival‘, which will illuminate the Dutch capital for the coming month, making the dark days just a bit more cheerful. This year’s edition is already the third one, a welcomed addition to the Amsterdam cultural winter scene. 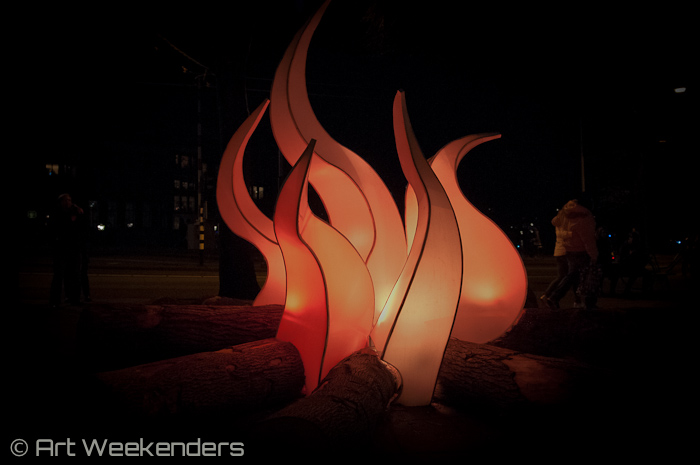 The actual seed to the idea was sown around Christmas 2009, when Henk Jan Buchel and Vincent Horbach organised a canal parade. The whole idea was to put some light into the already fairytale setting that Amsterdam offers and it was a one-off show that turned out well.

The following year Felix Guttmann got involved and his first contribution to the project was to involve yet another Dutchman, Rogier van der Heiden. The internationally famous light designer from Philips Lighting put the Magere Brug bridge, the famous Amsterdam landmark on the Amstel river, in a special light for a couple of weeks. The year after the parade grew and thereby the step to organise an actual festival around light installations was logical. Said and done, the first Amsterdam Light Festival was a reality in 2012. 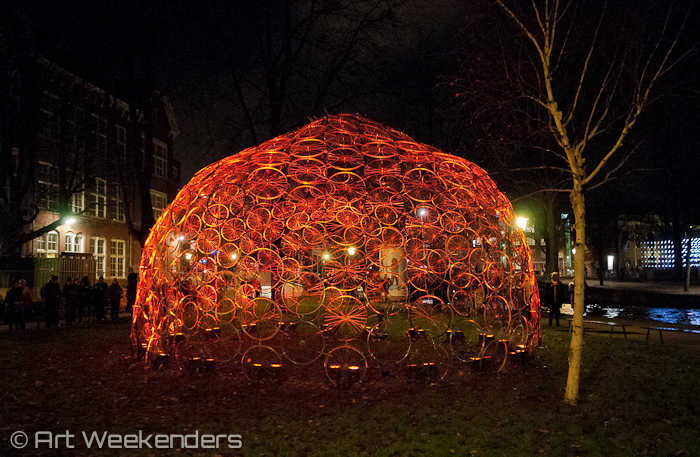 The main merit of the festival is that it puts some well-needed light into the street-life during the darkest time of the year. The first year the Amsterdam Light Festival was really well received, even to the extent that it got some Oprah-fame.

The theme of the event for this year is “A Bright City”, challenging artists to create a tribute to life in the city. The result is a unique take on the modern city of Amsterdam. 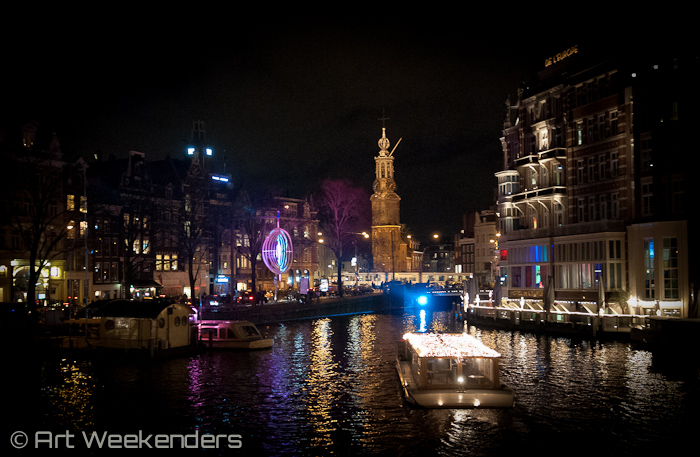 These are the three distinct pillars the festival rests upon. 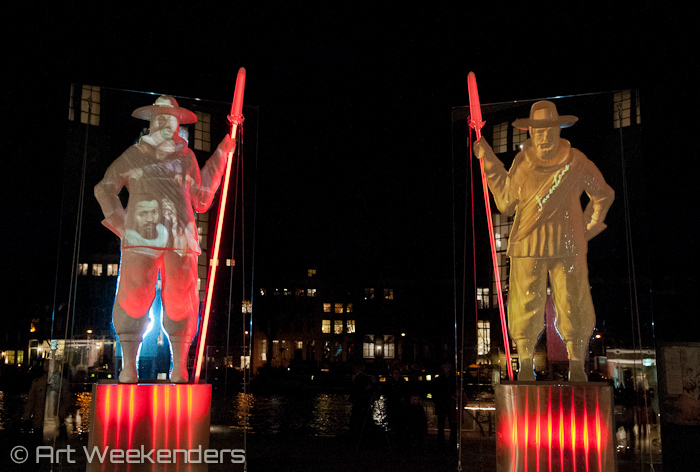 Light festivals are slowly turning into a global phenomenon. Be it Kobe in Japan, or Eindhoven (remember, Philips is based here), Singapore or Sydney, or why not the Loy Kratong Festival in Chiang Mai, Thailand, festivals dedicated to the celebration of light are becoming a more and more popular initiative. What they all have in common is that their aim is to inspire people, add some beauty into the hassles of the daily life and bring life and something inspiring to the otherwise fairly dull public spaces. 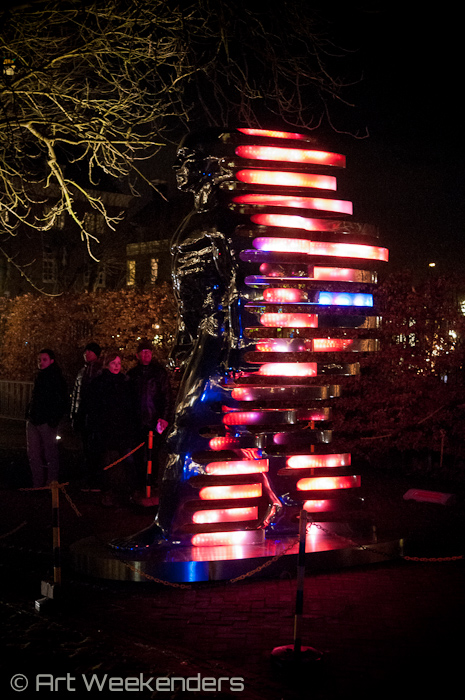 Of course, a light festival also has to show responsibilities, after all energy is not cheap, and sustainability is high on every well-respected city’s agenda. Unlike many other arrangements, like let’s say temporary amusement parks, which are more of a nuisance than enjoyment and drain energy (no, we’re no fans), the Amsterdam Light Festival is using cutting edge technology. Dutch companies – with of course Philips in the frontline – lead the ‘LED revolution’, where innovations and dramatic energy savings are at the very core of the festival.

During the coming month Amsterdam will be illuminated. Since this is our home base, it will of course be a natural step to report back continuously. The pictures presented are of our first visit, but we’ll likely return with some more, especially on our social media channels.

Are you curious and would like to compare this year’s installations from the ones from last year? Here in this photo essay from a year ago you can find pictures of some of last year‘s attractions.