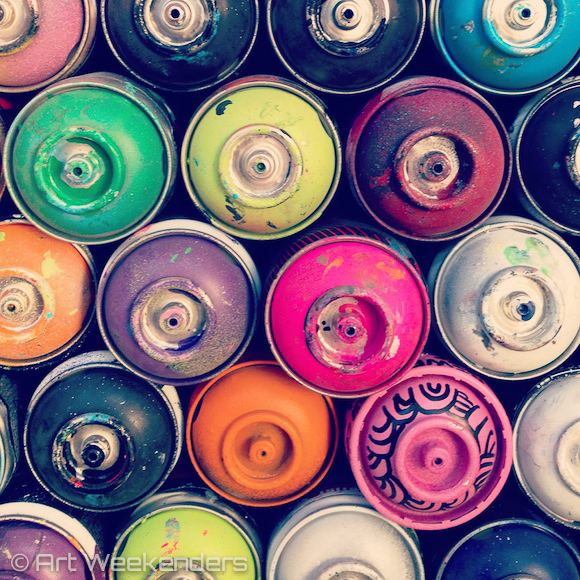 At the end, while the warm spring-sun was shining through the atelier’s windows, I was standing there with the finished canvas in my hand, shining in all its glory. Che Guevara came alive through my creativity that I never thought existed, in a colourful version never seen by the world before. That might be just as well for everyone, but I was still pretty pleased with the achievement. Next to me Lydian’s version of Erykah Badu was still going through the evolution of colours, it was up for grabs to know if we had another masterpiece to admire or not. As often though, here the important part was the process and not the outcome. Summed it all up: the two of us were quite excited for being part of this day’s experience.

We’ve been big street art fans for a long time, there’s so much story-telling potential and creativity around the whole scene that once you start scratching on the surface, soon you realise that you might even happen to open a Pandora’s Box filled with surprises and intrigues. Thus, it was no wonder that the outlook for a week in Berlin filled with ‘Berlin street art’ created a higher anticipation for us than re-seeing the Brandenburger Tor, with all due respect to this symbol of the unified Berlin. 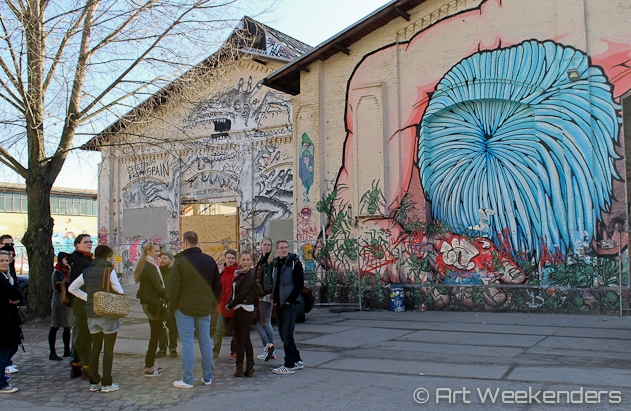 Berlin’s reputation as the street art capital of the world has been a well-known fact for decades now, and as a visitor to the city you can easily explore a lot of the street art by yourself. In fact, it’s actually hard to avoid it, you’ll see it pretty much everywhere, especially if you venture into the so-called artsy neighbourhoods like Kreuzberg or Friedrichshain. But if you want to learn something extra and get a better understanding of the life in this city, there are more exciting ways for exploring: for instance by joining one of the several alternative walking tours offered by the company aptly named Alternative Berlin Tours. One of their tours is in combination with a street art workshop, exactly the kind of fun we had in mind.

Some good four hours earlier, at the tour’s meeting point underneath the TV-Tower on Alexander Platz, it was jam-packed with eager tourists. Clearly the interest for the alternative side of Berlin has no intention at all to diminish; guess the gentrification can wait. A quick introduction later by our guides, raising the expectations further, we were split into German- and English-speaking groups and on our way to the U-Bahn, Berlin’s metro system: this is a tour into real life, nothing is artificial about it. You get to the spots of interest, there’s no museum that would bring the artworks to you. It makes the feeling extra special, it’s like being part of a crew, heading out on a mission. With some fantasy put into it, you can almost imagine what it must be like being one of the gangs heading out for a paint mission. Except that here we were under the safe guidance of our guide, Debbi, and there was no reason for even thinking about the ‘four-minute rule’ street artists here live with out on ‘jobs’, to avoid the long arm of the law. 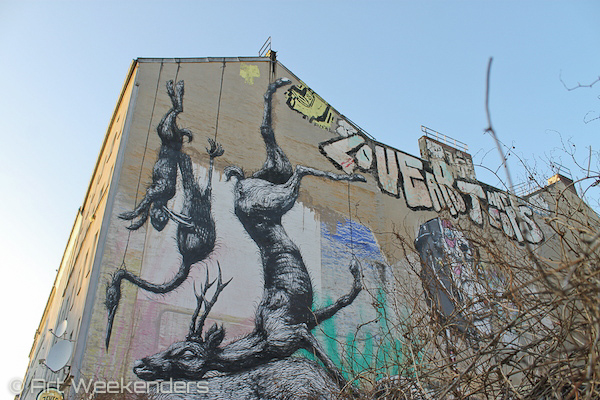 Streetart by Roa in Kreuzberg, Berlin.

Once down in Kreuzberg after a ride of a few stops, the next couple of hours were filled with cruising around the neighbourhoods in search of interesting street art pieces. There’s a lot, we can share that much information: if you’ve never been to Berlin, you might think it’s an exaggeration saying that you come across it everywhere, but it really is the case. Often you just look up and by sheer coincidence you stare at a four-story tall building from which this twenty-meters tall figure is staring down at you. Surprises are everywhere and there’s always more to see than you come across, just an afternoon will never be enough to cover it all. With the help of Debbi – or one of the other ‘Alternative Berlin’ guides – the search is drastically simplified and even better, you get the background-story that transforms the murals and even the most ludicrous mischievous tag by some juveniles into a story filled with surprises.

Street art is often misunderstood by the general public, as is the case with Berlin street art. Most outsiders quickly connect it to vandalism, the term graffiti is commonly used as the label for it all and in most cities it’s quickly dismissed as something to frown upon. There is certainly a reason for it all, a good chunk of those elements will still be found in the street-art scene today, and yes, even in Berlin. Most street art is actually illegally created, even though there are spots where the city council actively encourages it and even commissions artists for creating these larger than life images (in the sense that not only are these pieces big, but they often also carry a loaded, not rarely political message). 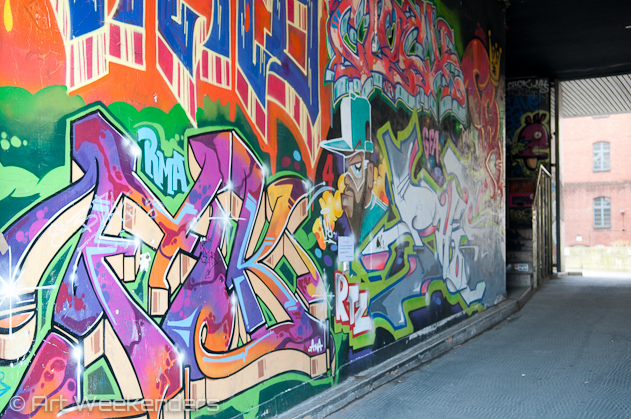 Streetart hall, where the crossover from graffiti to streetart takes place.

The distinction between “real” street art and what we could call vandalism is fairly clear, as long as you are willing to see it: the distinction can simply be drawn at creativity. There are many reasons why Berlin turned into this mecca of wall painters, and one of them is certainly its desirability for the counter-culturally minded youth who moved, or grew up here, ever since the era of the divided Berlin. Another can be found in the opposite end of the same story: once the dreaded Wall fell, Berlin and Germany had enough to think about and certain areas, especially in the zone between the “two Berlins”, were left as no-man’s land, in a city drained by the Cold War.

During the walking session of our tour the journey wasn’t only on foot, it was just as much a trip through the different street art techniques used around Berlin, and the world. This connection between vandalism and legitimate street art kept coming back: the thing is that before any street artist reaches a higher level, the likelihood that they start with simple tagging – that is, a short ‘signature’ scribbled on walls in as many places as possible – is high. Graffiti in its simplest form is often the first step into the street art world, but quite naturally, the established artists’ priorities soon change. Nonetheless, the two different ends of the spectrum keeps on coexisting in a symbiosis. A feature of street art is the respect for each other’s works, there’s simply a range of unwritten rules where the most important is not to cover others’ pieces with yours. 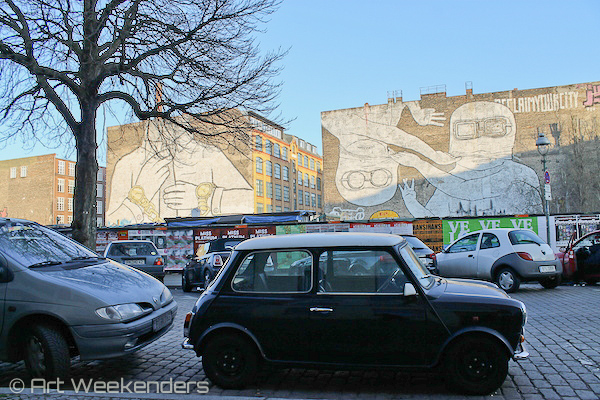 Streetart by Blu in Kreuzberg, Berlin.

While wondering and travelling towards the location of the workshop, the alternative side of Berlin slowly unveiled to us. There are pieces of world-famous artists like Blu or Osgemeos, but there are also less-known local artists through which you can see the different street art techniques, such as murals, paste-ups, burners, bombings, pieces, stencils and more. Yes, stencilling is likely the method that slowly brought street art into the mainstream (kind of), especially with one artist, the Bristol-born Banksy in the front. His politically motivated stencils reached such fame in the past decades that nowadays even well-established art institutes get involved with it, like the case of the #withSyria campaign that coincidentally takes place this week across the globe.

Back to our less advanced street art world, stencilling was exactly the medium for our creativity as well. After our exploration through the city, our guide Debbi took us to an eastern suburb of the city and the Alternative Berlin Tours headquarters, where pumped with inspiration it was time for us to get to work. Stencilling works by cutting out a pre-printed image from a paper, which you than spray-paint. Kind of like a simplified form of lithography. There were different images to choose from, ranging from the Blues Brothers to a more simple ladybird. The choice for the South American revolutionary Che Guevara felt appropriate, after all, street art at its best is to bring a message to society, don’t we just all agree? 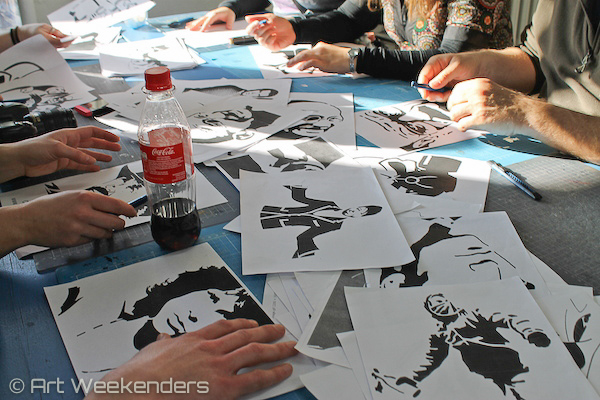 Stencils. The start of our own streetart canvas.

With the paper-cutting knives in hands and full concentration we got to work while good tunes were creating the right setting. Once the template was ready-cut it was time to get to the real job, with paint-spray bottles ready in hand. Until now it’s really all routine, but when the colouring and technique comes into the picture the artists in us had the moment to shine. Or fade. You might think that spraying some colours here and there is an easy task, but it’s all about carefulness and feeling: not spraying too much, moving the stencil around for creating shades of different colours and adding extra creativity with your own personal style.

The outcome? Definitely an experience of a kind, with learning elements and intriguing facts to take with us from a relaxed atmosphere. Measured in our own artistic value? Let’s call it an OK start; we might feel ready for that big open firewall next to that BMW car dealership (or wait, maybe that wouldn’t be the best of ideas). 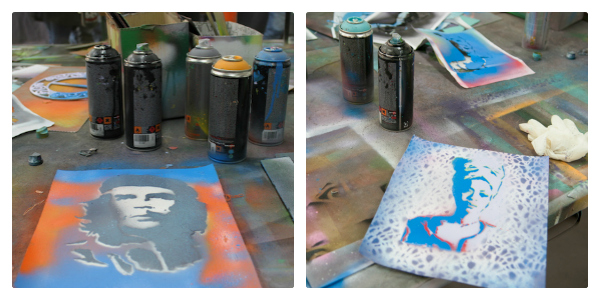 Alternative Berlin offers many other tours, check their listings. Among others they are behind the original Alternative Tour of Berlin where full focus is on street art viewing and they offer a free tour, where you name your own price in the form of a tip. Enjoy, we highly recommend it.

Disclosure: As the people behind the Art Weekenders blog, the tour we joined was complimentary for us. However, all opinions are our personal ones without any bias involved. This is a tour we loved and we can say it will stay memorable for a lifetime.

Your support is appreciated, please stay in touch by liking our page or follow us on Twitter.