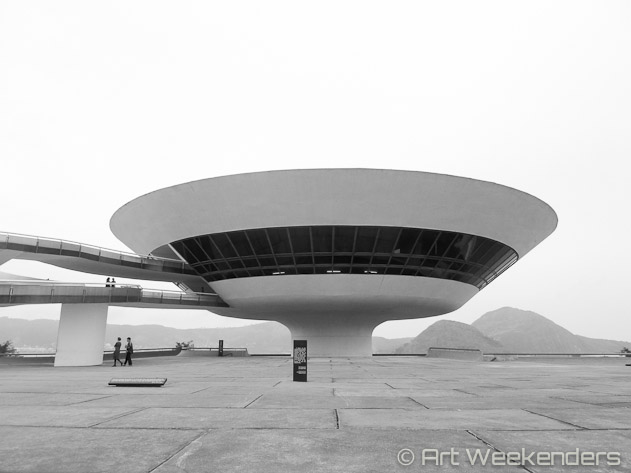 Part 2 – Art Highlights in Brazil and the Guyanas

Brazil – Focus on its Great Cities 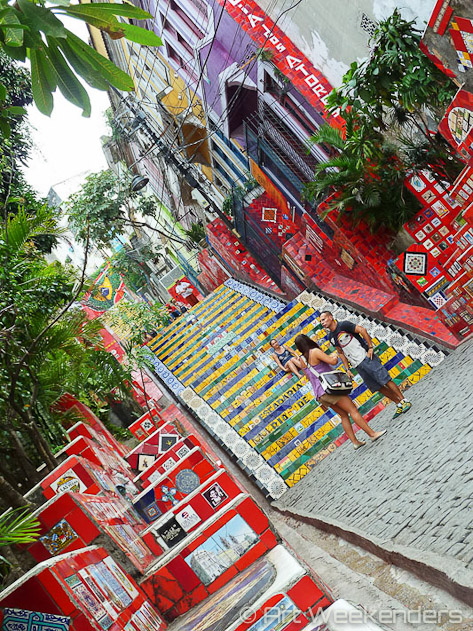 This is an honest question: how to tackle a country the size of Brazil in a couple of paragraphs? Well, in this article simply by skipping the beach discussion. Although we’ll shortly touch Bahia and Costa Verde (and yes, we’d love to go right now), we will keep our story to the cities instead.

When Brazilian cities are mentioned, the debate is often raging between Rio de Janeiro and São Paulo. It is a face-off that’s quite unbalanced. Both cities are totally different from each other. While São Paulo has by far an edgier side, Rio is an experience of a different kind. Cariocas – the folks from Rio – love their beaches and hanging out, to the extent that Paulistas – the people living in São Paulo – might even call them lazy. Play hard first and then work a bit, seems an appropriate credo for them. For the rivals from São Paulo? The total opposite really. In the economic heart of the country people work really hard. It is a different kind of Brazil you find there. Something very well visible in the daily life you will come across when visiting the city.

Both cities have great museums, but São Paulo wins that battle quite easily. On the other hand, just across from Rio is one of our all-time favourite architectural experiences, the Niteroi Contemporary Art Museum. The spaceship-resembling marvel designed by Oscar Niemeyer happens to have a decent art collection inside as well. In the rival city the ‘São Paulo Museum of Art‘ on Paulista Avenue is also an imposing building with one of  South America’s best art collections inside. 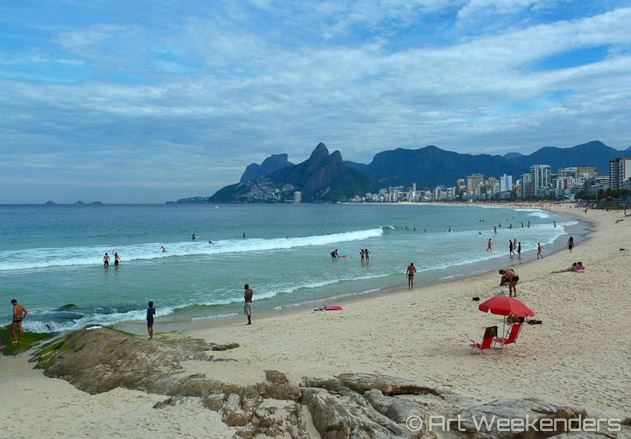 Considering the long bus-ride we had to take from the coast until Brasilia, Brazil’s capital since 1960, travelling-wise it was a pretty tiring detour. It was however a really rewarding in many other ways. With its futuristic structure and architecture it is really an eternally memorable experience. The architect behind all the architectural visionary beauty is once again the very same Oscar Niemeyer. Niemeyer was commissioned to design the numerous buildings in the city, which was built in only three years. We can’t say that our visit resulted in real long-lasting love, but it was a unique experience nonetheless to see this city. At an earlier stop in Curitiba we came across another of the Niemeyer’s creations, his Eye, which turned out to be one of the best museum we visited on the entire trip. 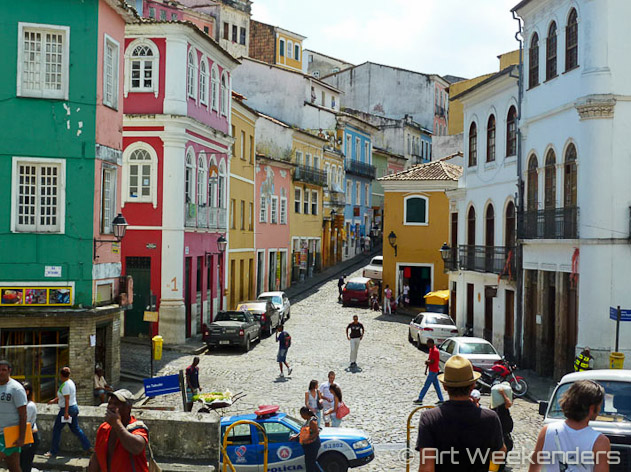 On the way to some Bahian leisurely days we also had a few memorable stops in Salvador, which likely has the nicest historical centre in this gigantic country. Another Bahian experience was Lencois in the heart of the state, which is a colonial experience of a different kind with a very specific Bahian feel to it. São Luis in the far north also has quite a unique historical centre, clearly showing signs of both its Portuguese and French connections. 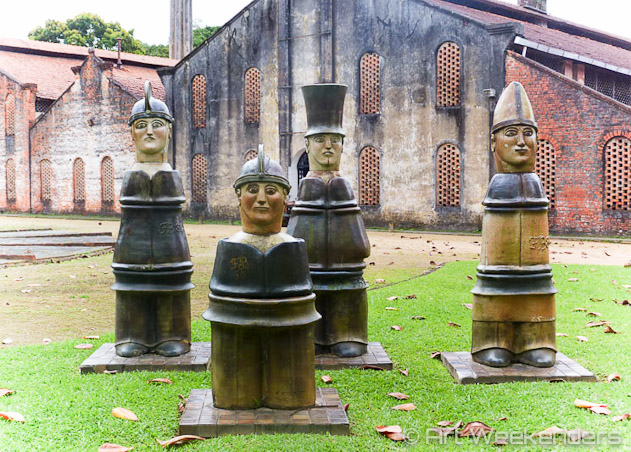 Somewhere along the route from south to north there are many other smaller and bigger highlights. The farther north we came, not only the climate was changing around the equator, but the whole country is actually different in feel and looks.

When we left Brazil after some three months in the country and crossed the Oyapock river into French Guiana, our predominant feeling was that there was so much we didn’t have time for. We felt we just nudged the edges of this great country. So we will be back, both here on the site with future articles, and hopefully soon in real life too.

French Guiana – A Pocket of Europe in the Tropical Heat 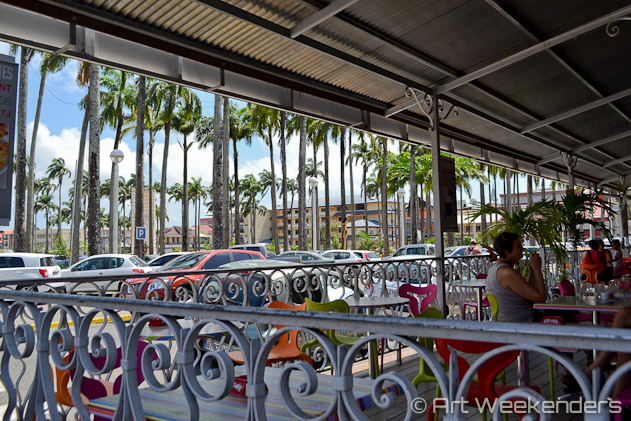 Let’s face it: if you make it up to this corner of the South American continent, the first thing on your mind won’t be to find the nearest art museum. Not even if you are in the so-to-say ‘Francophone’ Guyana of the three. Even if technically speaking you are actually in France, you simply won’t find much of a resemblance to Paris. However, there are many other details that will catch your attention, not the least the history of this territory with a turbulent and often tragic past. 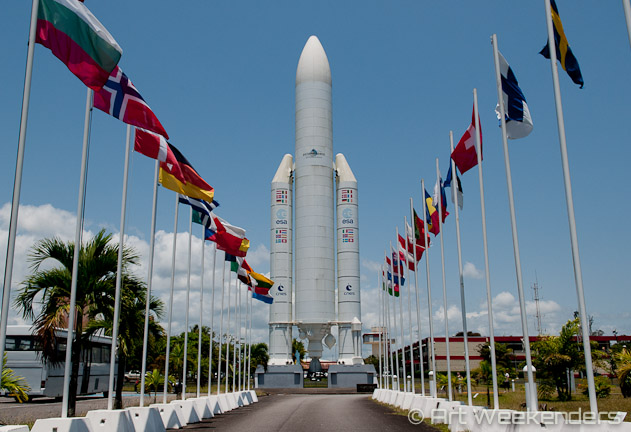 French Guiana being the former penal colony of France, the first European settlers of this region were all prisoners or the guards watching them. Much of the history of a good part of French Guiana to this day is tainted by the penitentiary camps. The name Papillon is nearby, wherever you turn. There’s for instance Devil’s Island, which besides being a monument over French history is just as much a nature experience. 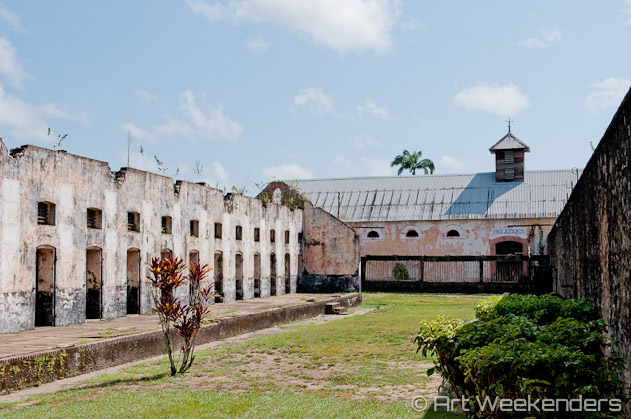 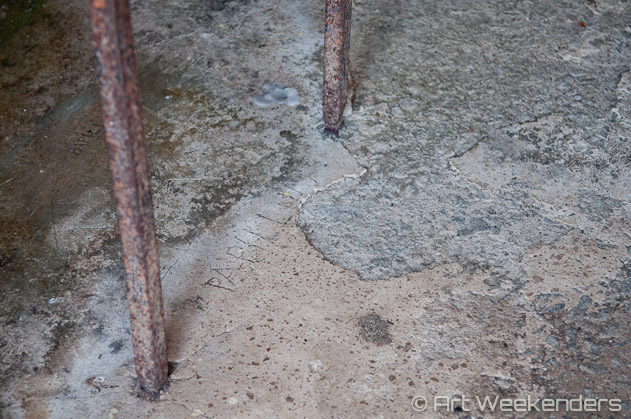 French Guiana is more than just the history of its prisoners though. Although with only some 220,000 inhabitants nature certainly has a big role in this hidden corner of the world. You will have some of the most fantastic rain forest in the world, just a short hour away from the capital Cayenne. Another very special attraction of French Guiana is the Kourou Space Centre, about an hour away from Cayenne. This is Europe’s most important space station, although right across the Atlantic Ocean. Another peculiarity you find here is a mini-Laos on the other side of the world from Asia. In the 1970s some Lao refugees ended up here in French Guiana. Their settlement – called Cacao – is a strange and exotic little spot in this ‘European’ corner of South America. Talking about many contrasts. 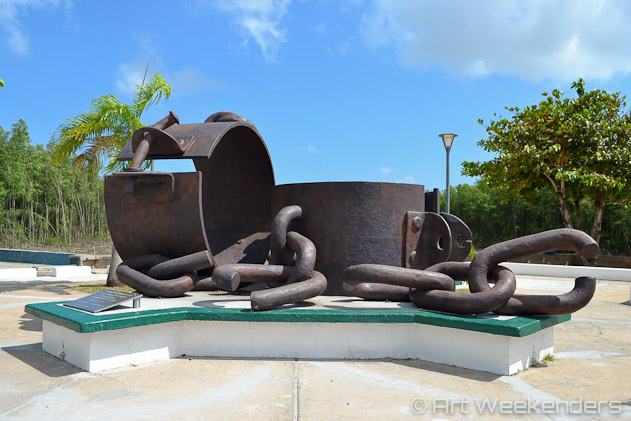 For art buffs there are certainly limited options. If you are keen on hiding from the scorching heat of the equatorial Sun, in Cayenne you will find the ‘Musée Départemental Alexandre-Franconie’ with a nice collection. It is more interesting from a historic point of view than seen from an artistic value.

Suriname is really a place where contradictions, intertwined history and contrasts of impressions dominate your stay. This former Dutch colony is in many ways the most interesting of the three Guyanas. Dutch is still the official language and what you hear in the bigger communities and especially in the capital Paramaribo. This is also the part of South America that will continuously make you ask yourself where you really are. The vibe in general is more African than South American, especially if you come further inland, away from Paramaribo and the coast. 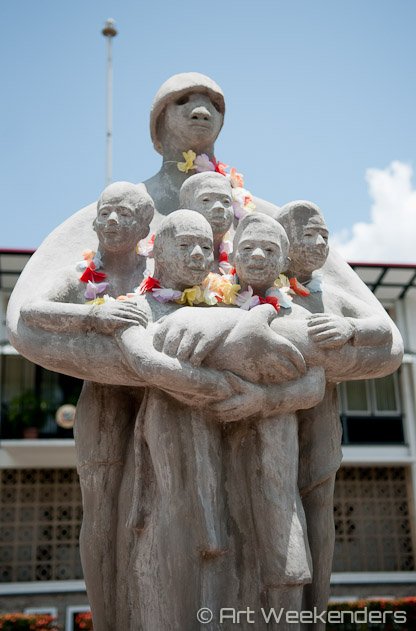 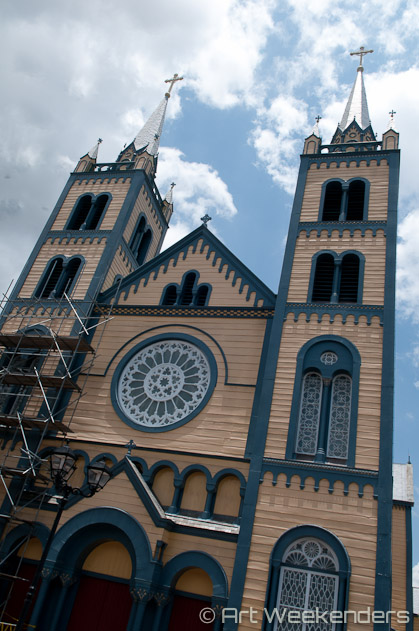 The capital – Parbo as it’s lovingly called – is famously unique with its wooden architecture that is not resembling many other cities. On top of it you’ll also have a great mix of cultures here. The Hindu influence is considerable, especially in the Western part of the country closer to the Guyanese border. On top of it, you will also find pockets of land strongly influenced for instance by the Sephardic Jewish community. Thus, be ready to get constantly surprised. 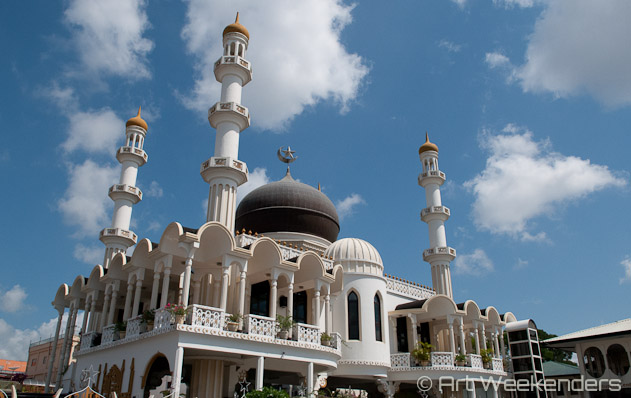 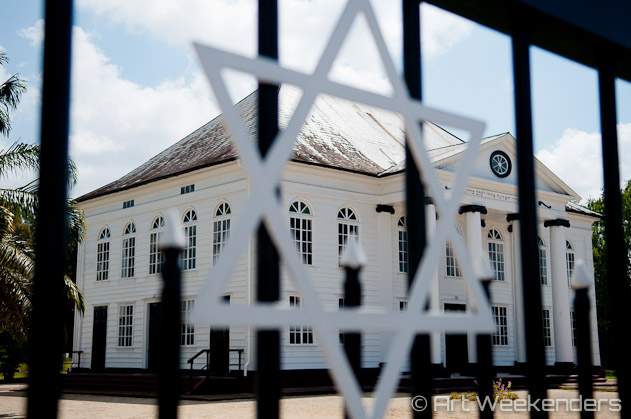 Art lovers should in any case aim their focus on religious architecture in the first place and the interest will be almost equally divided between the three big religions. The Saint Peter and Paul Cathedral is the biggest wooden cathedral in the world and you will be positively surprised. What you’re used to with Gothic cathedrals of stone will come across as totally different in wood. The Neveh Shalom Jewish Synagogue right next to the Suriname City Mosque are both beautiful. It is a striking symbol for how a society can manage to co-exist with different religions (but let’s not get fooled, even Suriname has its fair part of historical troubles, although not necessarily always grounded in religion). Further highlights in the capital will include Fort Zeelandia, a perfect trip through history, and the classy impression of the Independence Square and the Presidential Palace, all fine examples of beautiful wooden constructions.

The third oddity of the Guyanas is the one that sometimes is simply referred to as British Guyana, logically, since this country still has English as its official tongue and the ties to its past as part of the British Empire are all there. Similarly to Suriname, the mix of cultures are dominating the experience and the Hindu influence is especially strong here. Guyana is a country often forgotten. Also its tourism is very marginal, only some 4,000 visitors find their ways here every year. That ‘s not a lot. Georgetown has an undeservedly bad reputation. It’s often said that it’s a heavily criminal city, but if you watch your whereabouts and use normal pre-cautions, you’ll generally be safe. Nonetheless, this is really more the West Indies than South America. 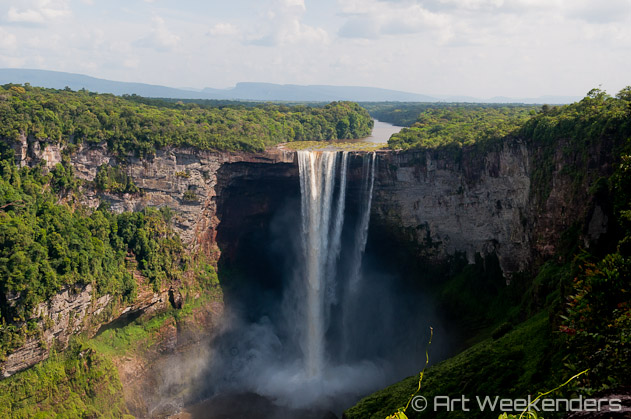 The country has a lot to offer for ecotourism. We wouldn’t be surprised if this will be one of the future high-profile green destinations. The remote and almost exclusively by airplane accessible Kaieteur waterfall – the highest single-drop waterfall in the world  – is just one of the highlights. For cultural experiences it is more the atmosphere than the actual sights that will keep you intrigued. There are plenty of nice colonial-time buildings, similarly to Paramaribo across the border, all constructed in wood. The Stabroek Market is an experience of a kind and the wooden Saint George’s Cathedral is easily rivalling the similar construction in Paramaribo. It is said to be the tallest wooden church in the world. The country’s National Museum is more an interesting curiosity than a place of a great collection, but offers some great insight into this strange little world. 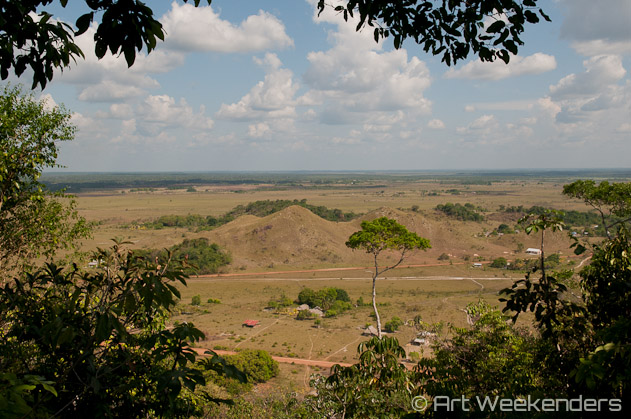 For those interested in the amazing history and peculiarities of the three Guyanas, John Gimlette’s fascinating book rivals his tale about Paraguay we mentioned in Part 1. Check it out.

In the final and third part of our virtual art tour of South America, we will return to the Spanish speaking parts of the continent and we will head straight into the Andean world, covering the countries from Bolivia in the south to Venezuela in the north. Looking forward to see you back.