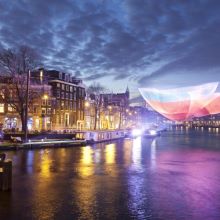 Yes it’s that time of the year in Amsterdam. Around the 5th of December Sinterklaas – aka Saint Nicholas – is coming to town, with presents and chocolate letters to the joy of all the Dutch kids. But let’s just forget about the old man now that he’s taking the boat back to Spain (weather permitting we assume) and concentrate on something younger, but at least as colourful.

What we talk about is the ‘Amsterdam Light Festival‘, which starting today Friday the 6th of December, will illuminate the Dutch capital for the coming one and a half months. This year’s edition is only the second overall, and certainly a welcome addition to the Amsterdam cultural winter scene. 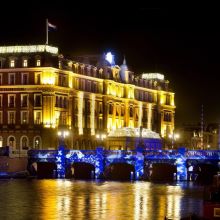 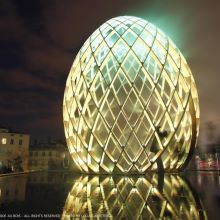 [/ale_one_half_last]The original idea was born around Christmas-time in 2009, when a canal parade was organised. The following year one of the initiators to the parade, Felix Guttmann, got involved and his first contribution to the project was to contract yet another Dutchman, the internationally famous light designer from Philips Lighting, Rogier van der Heiden, who  put the city’s most famous bridge, Magere Brug, in a special light for a couple of weeks. The year after the parade grew further, resulting in the idea to organise an actual light festival, resulting in the first Amsterdam Light Festival in 2012. [ale_one_half] 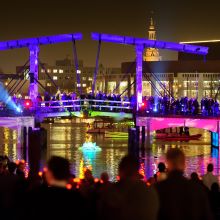 [/ale_one_half_last]The main merit of the festival is that it puts some well-needed light into the street-life during the darkest time of the year. The first year the Amsterdam Light Festival was really well received, even to the extent that it got some Oprah-fame.

The theme of the event is “Building with Light” and there are three distinct pillars the festival rests upon. 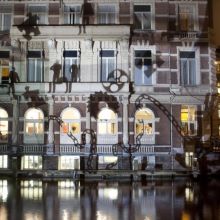 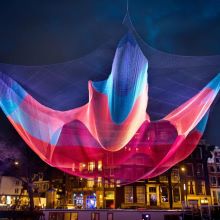 [/ale_one_half_last]Light festivals are slowly turning into a global phenomenon, with cities from Ghent to Sydney putting on their versions of celebrations of the light, good initiatives to add some flair to the winter darkness.

The Amsterdam Light Festival is also taking its responsibility in regards to sustainability byusing cutting edge technology. Philips  and other Dutch companies lead the ‘LED revolution’, focusing highly on innovations and energy saving technologies throughout the festival. 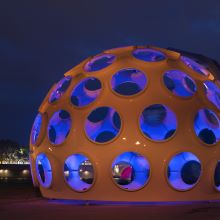 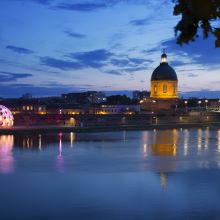 [/ale_one_half_last]During the coming fifty days Amsterdam will be illuminated. As this is our hometown, we promise to report back continuously. The pictures presented here are all courtesy of the Amsterdam Light Festival organisers, but in this photo essay you can see our own photographic impressions. Also, during the weeks we will keep an eye on which parts are really worth to pay attention to and also if there are any cool specials you should be aware of. Thus, Amsterdammers (but also others), please visit back, we’re happy to see you.

Update December 2014: A year later a new edition of the Amsterdam Light Festival came to the Dutch capital’s winter agenda – please check it out!

If you liked this post and would like to see more in the future, please follow us on Facebook, Twitter or Google Plus. Shortly we are also launching our newsletter with stories, special offers and previews of upcoming events from around the world of art and culture, for which you can subscribe here.