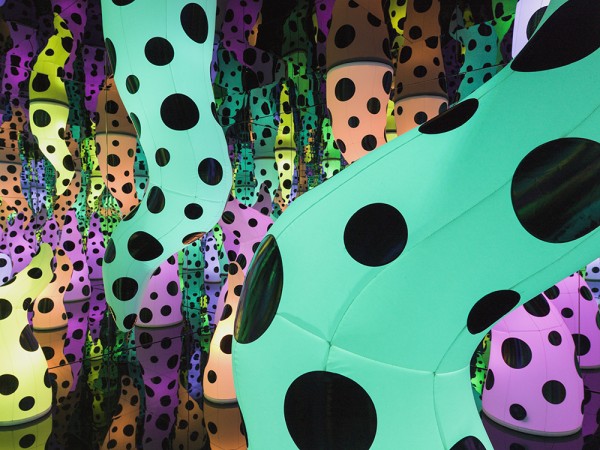 You might expect a long line to get into some exhibitions in New York, after all, there’s the MoMa, the MET, the Guggenheim… But the exhibition with the longest lines at the moment – up to some four hours in fact – is Yayoi Kusama‘s ‘I Who Have Arrived in Heaven‘ in Chelsea, at David Zwirner‘s galleries. The interest is maybe no wonder: once you get in, you are immediately transported into a totally different reality. Into the dream world of the Japanese artist, some might argue quite possibly directly into her mind.

You would expect an exhibition of this kind being the creation of a young talent who grew up in our technology-driven world, but Yayoi Kusama is already in her mid-eighties. What might be even more remarkable is that for the past forty years she’s been living in a Japanese mental institution, although fully on her own initiative, after some stressful time in New York back in the seventies. While for many this would be a well-kept secret, for Kusama her mental illness is in fact part of her creation process. Kusama is known for her art expressing itself in exaggerated shapes, colours and forms, fuelled heavily by her hallucinations she suffered since her childhood. The usual end result of her obsessive compulsive disorder is something straight out of Alice In Wonderland (in fact, we will come back to this in a separate post shortly). 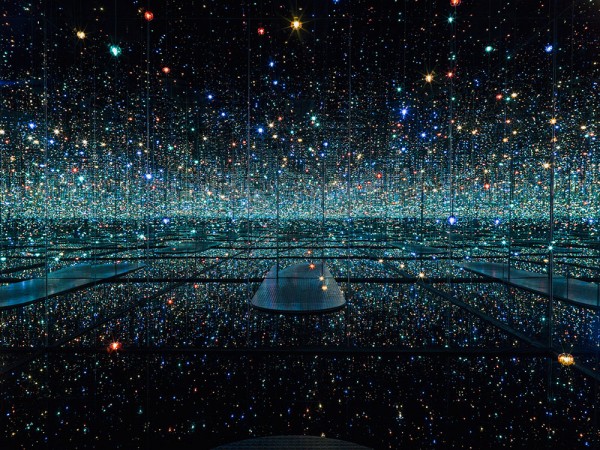 Yayoi Kusama – The Souls Of Millions Of Lights Away

Now back in New York, the focal point of Kusama‘s exhibition is again her so-called “infinity rooms“. These favourite installations of Kusama’s have been in the centre of her attention since the sixties, resulting from her existential pondering about life, death, the eternal unknown. The first of her installations was a room equipped with all-covering mirrors and hundreds of polka-dotted phallic shapes. The mirrors ever since remained the main part of the concept and LED lights grabbed her imagination, creating shimmering galaxies of light spots in Kusama‘s universe.

The name of the latest room is ‘The Souls of Millions of Light Years Away‘ and again multi-coloured LED lights are in focus, bulbs which create strobes of lights in different measurements, repeating itself every 45 seconds in an infinite setting. Better to judge for yourself what the experience must be like.

A second room in the exhibition, in another location on the same West 19th Street, is dedicated to a different infinity room, ‘Love Is Calling‘. This installation is a room filled with brightly coloured inflatable sculptures, presented as polka dotted stalactites and stalagmites in a technicoloured universe. A world parallel to Willy Wonka’s or even Doctor Zeuss’, a world galaxies apart from our day to day life. No wonder that the crowds are willing to wait for hours – and create an Instagram sensation out of it. 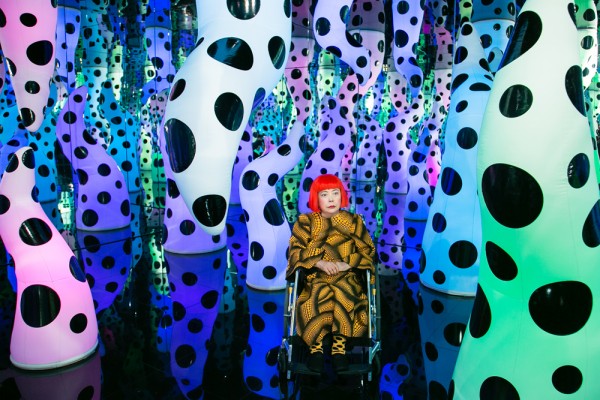 Yayoi Kusama – Love Is Calling (with the artist herself) 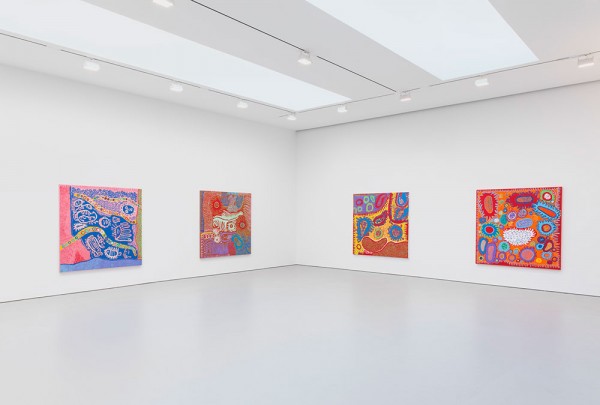 Yayoi Kusama – I Who Have Arrived In Heaven

The collected artwork and the two infinity room installations are housed in all three of David Zwirner’s galleries in Chelsea at 519, 525 and 533 West 19th Street. The exhibition is still on viewing until December 21, 2013 – sounds like a perfect inspiration for your Christmas shopping if you’re in NYC.

If you liked this post and would like to see more in the future, please follow us on Facebook, Twitter or Google Plus. Shortly we are also launching our newsletter with stories, special offers and previews of upcoming events from around the world of art and culture, for which you can subscribe here.